Ferrari is a firm that built its reputation on V12 cars. But to those new to the marque, it is always a surprise that there were four and six cylinder Ferraris as well.
This car is the 750 Monza, which came with a spyder body and was a race car though it could be driven on the street. This particular one is out of 1954. 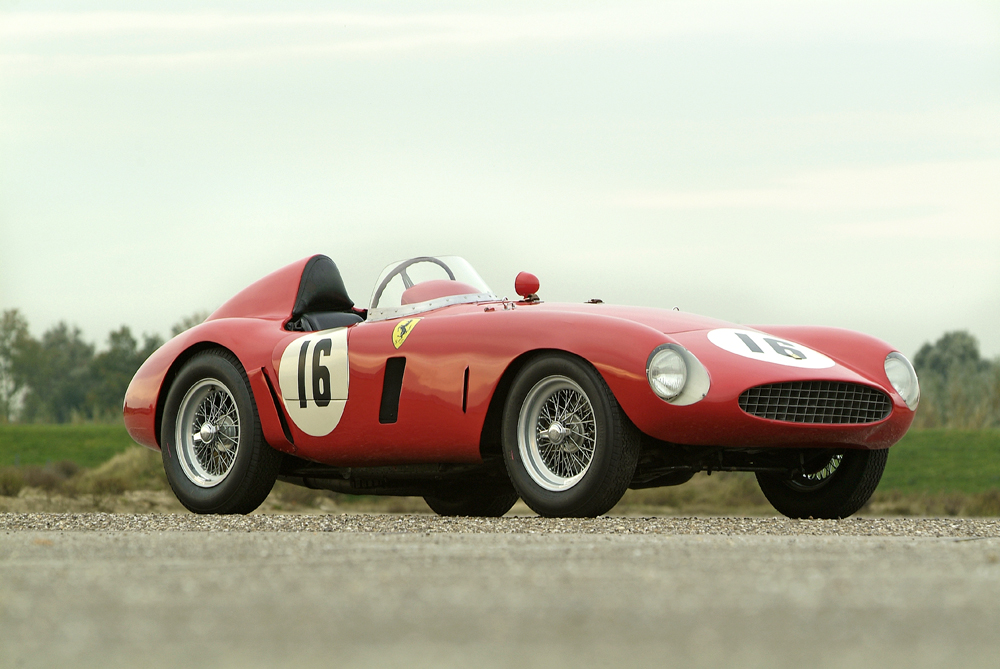 One of the earliest coil-spring suspension works team cars, it built on what the factory designated the Tipo 510 chassis design. The engine was the Tipo 119 3-liter twin-overhead four. This car, ‘0486M’ was assigned to the works team collaudatore (test-driver) Sergio Sighinolfi for the 1955 Mille Miglia. In the 1955 Mille Miglia Sergio Sighinolfi drove ‘0486M’ to sixth place overall, taking 11hr 33 min 27sec to do the deed. A few cars beat him but after all, he was up against the winning and second place Mercedes-Benz 300SLRs of Stirling Moss/Denis Jenkinson and Juan Manuel Fangio, third-placed Umberto Maglioli’s Ferrari, Francesco Giardini’s Maserati finishing fourth and American Mercedes-Benz works driver John Fitch, just ahead of him in fifth.
This car was then obsolete as a works racer so it was sold to Swiss owner-driver Jacques Jonneret, who competed in it with another fellow-amateur driver André Canonica in the Hyeres 12-Hours, in France (according to some reports) while others team Canonica with Gino Munaron in a Ferrari Monza, which won outright.
The spyder also appeared July 24, 1955, with Jonneret at the wheel, in the Portuguese sports car Grand Prix at Lisbon, but was a DNF after 28 laps.
It came to England in August 20, 1955, running in the Goodwood International 9-Hours classic co-driven by its owner Jonneret and pro Brit driver Ken Wharton. But after leading for 2/3rds of the race, engine failure forced it into retiring in the sixth hour.
Switzerland banned sports car racing on dedicated tracks after the 1955 Le Mans disaster so Jonneret could only run mountain Championship events through 1956, including the Ste Ursanne-Les Rangiers and Ollon-Villars events.
He stopped racing it in 1956.

THE BUDDING CAR BUILDER
Then a man who represents Switzerland’s only sports car builder, Peter Monteverdi, bought it.

Monteverdi of Basle, campaigned it in the 1957 Tiefencastel-Lenzerheide mountain-climb, and won the similar-standard Swiss Martigny-La Forclaz event. Unfortunately he might have been carried away by enthusiasm and driven beyond his talent, as he crashed the car during the Turckheim-Les Trois Epis mountain-climb. It sounds like he was a cheeky lad, being only 23 years old but he was already building a Formula Junior race car under his own name. He had taken over the family automobile repair shop in Binningen upon his father’s death in 1956. He even talked Ferrari into letting him be the Ferrari distributor for Switzerland.
The order of events in this car’s history have then been variously reported, but either Peter Monteverdi then had ‘0486M’ rebodied in Gran Turismo Berlinetta form before selling it to Dr. Alfred Hopf of Basle, or he sold the damaged car to Dr Hopf first, and then commissioned the Sauter coachworks to rebody the car to a Monteverdi design which included gullwing doors.

THE REDESIGN
Monteverdi wanted to not only be known as a good race driver, but a good car designer. The coachbuilder in 1958 is listed as “Sauter.”

It must have been with the proviso that Monteverdi still would be allowed to race it, as it was Monteverdi who drove the car in coupe form to win its class and set 4th fastest time overall in the September 1958 Mitholz-Kandersteg mountain climb.

ANOTHER OWNER
The next collector was still a Swiss–this time Othmar Graf – who in the early 1970s had the car partially restored and then offered it at auction at the 1974 Geneva Salon. It is recorded as having been sold there for SF27,000, and then went to Donald K. Nelson in the UK.
But its transformation back to Spyder didn’t start to occur until it was bought in chassis form only by Nigel Moores, who said his plans were to restore the car to its original Mille Miglia form but those plans were stymied when he sadly lost his life as a passenger in a road accident.
Whoever bought it from the Moores estate was lucky enough to find an original discarded Scaglietti spyder body which had been removed from another 4-cylinder Ferrari earlier and buy this for the 750 chassis.
The work was done by a famous name in British race car history, Gomm Metal Developments of Old Woking, Surrey (who also, by the way, built the GT40s for Ford).
The engine for ‘0486M’ was rebuilt in the 1990s by British 4-cylinder Ferrari specialists Hall & Fowler (today Hall & Hall) of Folkingham, Lincolnshire, and the engine reunited with the chassis by British specialist Squadron Leader David Noble’s Ardua Engineering company.

I would like to include this car in my next Incredible Barn Finds book but need to find out approximately what Monteverdi sold it for, way back when. I do have some indication of its value back then. The car was also offered in Jan. 1960, in Road & Track classifieds, for $8,700.
I wonder if anyone out there can name another price it was advertised for that was even lower? That was still a high price back then, when a three bedroom house in the suburbs was $22,000.

The body designed by Monteverdi was saved and may be on another car. It was last reported to be in the hands of race car fabricator Oliver Kuttner (now a successful politician….).

One way you could look at it was that, by playing at car stylist, Monteverdi saved the car from being scrapped but it’s too bad that it still can’t wear that body as it would be an example of a Monteverdi-designed Ferrari. But it is just worth too damn much as an ex-Ferrari works racer in its Mille Miglia shaped body to keep Monteverdi’s involvement in Ferraris alive.

The owner of the Monteverdi Ferrari Coupe replied and sent photos, see http://mycarquest.com/2016/06/owner-monteverdi-ferrari-coupe-sends-note-photos.html

We have 7311 visitors online