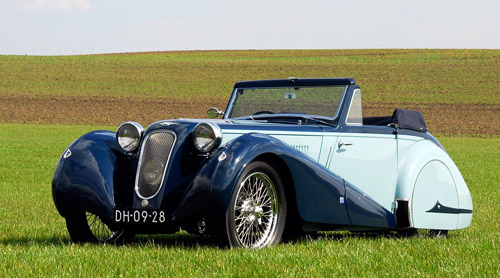 Meet Symphony; a one-off MG TA born in the workshop of Park Ward.
Read the story provided by the proud current owner H. de Groot, with written comments by Mr. Charles Ward himself.

Charles Ward Jr., son of Charles W. Ward of Park Ward Coachbuilders, wanted to be a medical doctor but was forced to work in his father’s business, where he learned the handicraft of coachbuilder. At the age of 31, Charles Ward wanted to prove his skills by building his own masterpiece. In those days he could not afford a Rolls Royce rolling chassis, so it had to be a small economic and payable rolling chassis that could meet the latest state of technique but strong enough to carry the Park Ward coachwork. But… Charles had another demand; his masterpiece had to be his daily-car! The 1936 MG TA could meet this profile. Charles Ward built Symphony all by himself, of course with the help and all the facilities of Park Ward Coachbuilders and even with some help by his wife Joy. 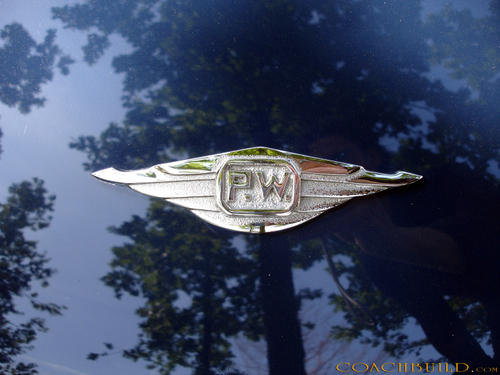 In 1985, I had already been a member of the MG Car Club Holland for 11 years. In those years, I visited a lot of MG events in Holland as well as abroad with my concours MGB. My attention was then directed to the beautiful classic cars, MGs in particular. I realised that the vintage types were unsuitable for me, because the speed, the brakes and the cooling are insufficient for my demands. The choice was easy to make. It had to be a T Type. But which one? TA, TB, TC, TD or a TF? After some orientation I decided that it should be a TB.
I told a friend in England who ran a body shop that I was looking for an MG TB. One day, he called to say that someone wanted to sell his MG. The previous owner had partially dismantled the car and now knew that he would never restore the car.

When I asked what kind of MG it was, my friend said something like MG Ward. I answered that I had never heard of such an MG and he should send me some more information about the car. He sent me a copy of the Autocar article which appeared in 1946, describing the car in detail. It showed that this interesting TA was a one-off built by the famous Park Ward Coachbuilders. Since the seller did not want to advertise the car or bring it to an auction, the price was rather reasonable. Yes, this was the car I had been waiting for.

Viewing
I departed for England with cash in my pocket to look at the car with a view to buying it. Upon arrival at this former owner's home, I was really flabbergasted. On his large estate there were a lot of the most exclusive classic cars like Rolls Royces, a prototype Aston Martin, an MGA with MGA-1 as number plate rusting away in the mud and in some sheds. Soon I saw the TA Park Ward DHC which, for the first time in 26 years, was washed and getting some fresh air. Because the body was of aluminium she appeared, with the exception of some dents, tears, and some later alterations, to be in a rather reasonable state. Also the woodwork and the chassis were well preserved. Technically she was a disaster. All the mechanical parts had been removed from the chassis. Also the interior was missing a lot of parts. I thought to myself, "The chassis and the body are of good quality, and the missing parts I can get somewhere." In an instant I knew she was so beautiful and the car of my dreams. I bought the car on the spot.

During the loading on to the towing truck I had some time to look for the removed parts in the barn. There was a huge pile, 3 meters wide and 2 meters high, full of parts from the most exotic cars. With the help of the former owner I sorted out the most important parts like some body parts, interior gadgets and the steering parts. Having the car restored for a reasonable price was impossible, so it became a Do It Yourself job. I had decided to do the job to the highest possible standard of quality. Read the entire restoration story at my website: www.MGTA.nl

Charles Ward composing his Symphony
Charles Ward: "During the summer months I had been rebuilding a 10 HP T-type MG, a 1936 model. Joy had been very understanding and had worked months, and months. We have fitted a supercharger and the chassis has been completely rebuilt. On oct 15, my birthday, I took these photographs of the chassis before the redesigned body was built." 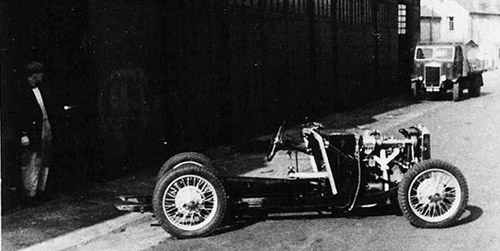 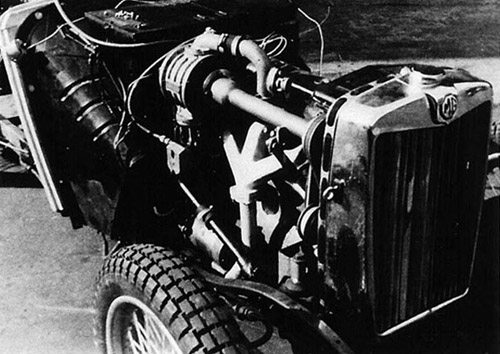 "Through the following months the body begins to take shape, some photographs show the different body framing stages." 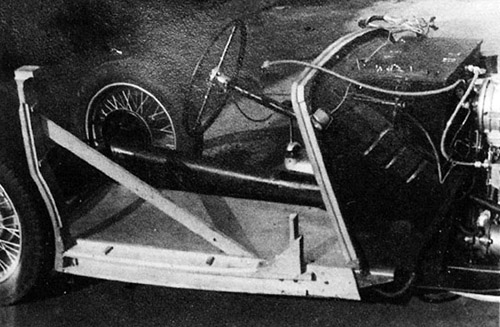 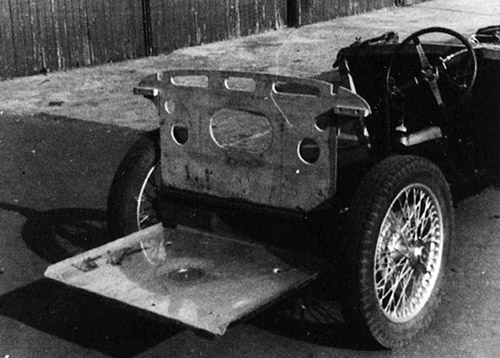 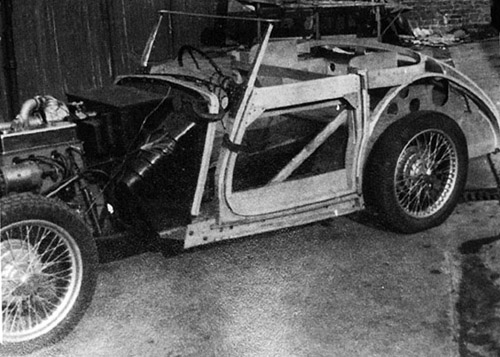 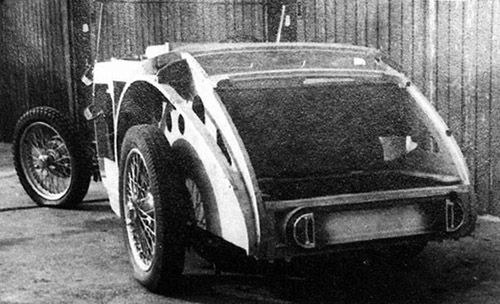 "On and on until that great day when Symphony was first on the road." 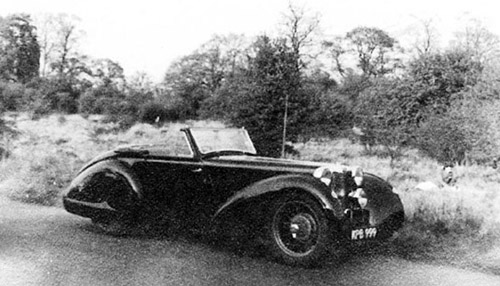 "Just one year less one week. An idea, a years hard work and a life’s ambition made." 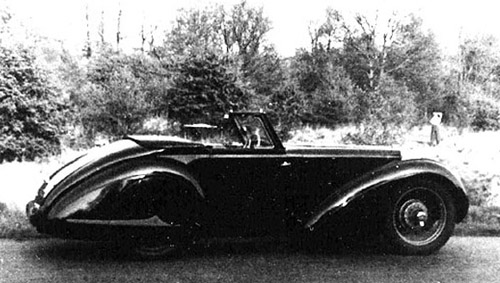 In authentic photographs shown in the magazine ‘Autocar’ you can see that Charles made the front wings end just where the doors begin and the car had a (modified) MG radiator shell. When I visited the widow of Charles, Miss Joy Ward, she allowed me to take the above photographs from the pages in the family-album detailing various stages of the build. In the caption I could read the name Charles had given to his masterpiece: Symphony. In my opinion Charles could not have given her a better name. 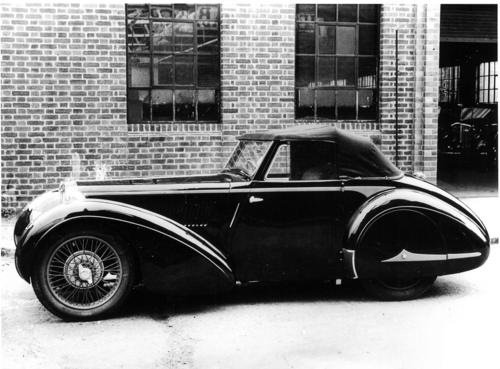 Symphony outside the Park Ward workshop.

Because of the generally changing ideas, just after the war, Charles wanted to experiment with some design features. He did this by giving his personal car a face-lift. In 1946 Symphony received much longer flowing front wings all the way down to the rear fenders, an improved drop-head roof, a radio and a prominent streamlined painted nose-cowl. The long flowing wings later returned in the Park Ward 1949 Bentleys. The original photos of the face-lifted Symphony (in front of the Park ward premises) were with the car when I collected her. 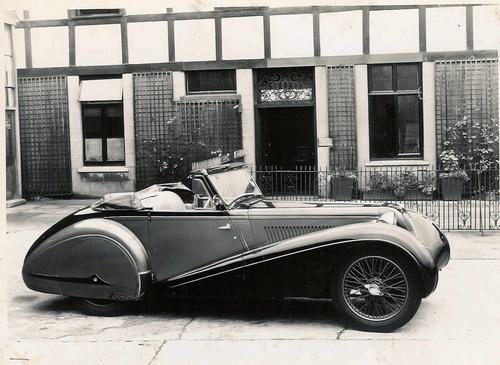 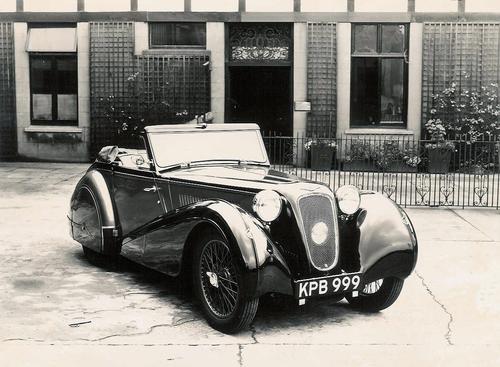 Symphony after the face-lift

Later on Charles removed the streamlined nose-cowl in favour of the earlier MG look-a-like radiator. There is a poor picture of 1960 where it can be seen. More history of this phase does not exist.

When I acquired Symphony I was free to choose which nose I would restore: the modified MG radiator shell or the painted streamlined cowl. As I was deeply into the MG-world it was logical for me that the characteristic MG nose should return.  This is how you knew her for 14 years. This was not a wrong choice as proven by all the cups she won on several concourses d’elegance. Some of them where very special like the Dutch “Het Loo concours” and the “European Concourse d'Élégance in Schwetsingen”. The people found her beautiful. 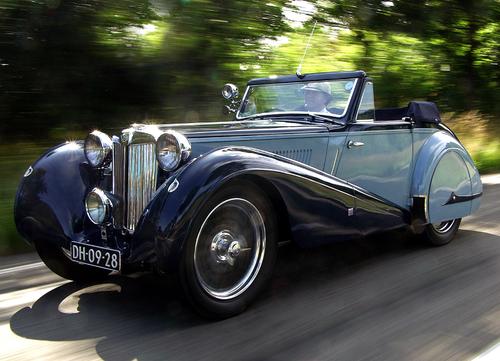 Symphony with the original MG radiator

Doubts about the nose
In the 14 years after the restoration my wife and I got very familiar with the lines of Symphony and came to the conclusion that the square front (T-type shell) was not harmonising with the spherical round curves of the body. I always had to manoeuvre photographers in such a way that they didn’t take pictures straight from the front. She was, according to us, just not looking correct that way. We wanted to put the 1946 painted front-cowl back on, thinking this would be a quick change. But after making inquiries it showed out to be a real heavy operation. The original cowl was cannibalised (sold by previous owners). Years and years with a lot of pleasure and success passed by. 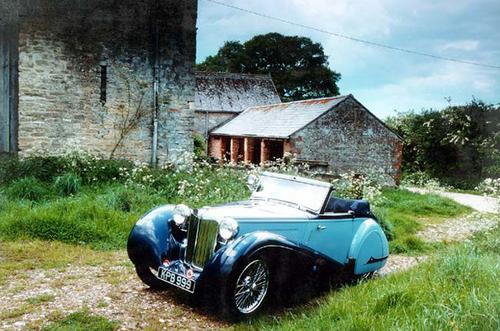 Wrinkled nose
Until ... in the summer of 2005 Symphony’s nose got awful wrinkles. Yes, even burst. An operation was inevitable to keep her presentable on her 70th birthday. The modified MG radiator shell was UK-made in 1985 in such a bad way, it needed extensive grinding before it could be re-chromed again . The shell  had become extremely thin and couldn’t withstand any more heavy treatment. When I had to get a new nose build I could of course choose the painted streamlined front cowl.

With an experienced Dutch coachbuilder we did a thorough study of the two available pictures. I had faith in the qualities of the coachbuilder who made the aluminium nose according to the two pictures. In reality it was an enormous job with endless fitting, measuring and comparing the photographs. The hood had to be shortened and additionally the radiator needed severe adjustment and new fitting. The chromium rim for keeping the gauze in place had to be made from scratch. After the paint-job it showed how well the nose was built; everything fitted correctly. My wife and I find her more beautiful now, even from the font.

This is how she will remain for many years to come. 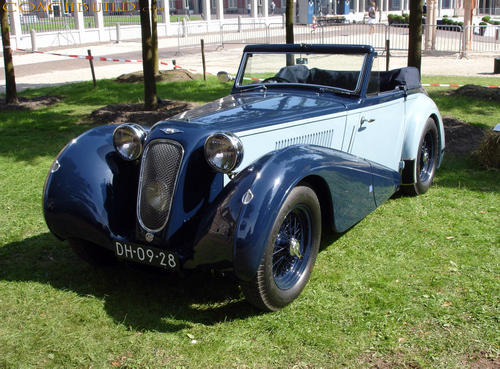 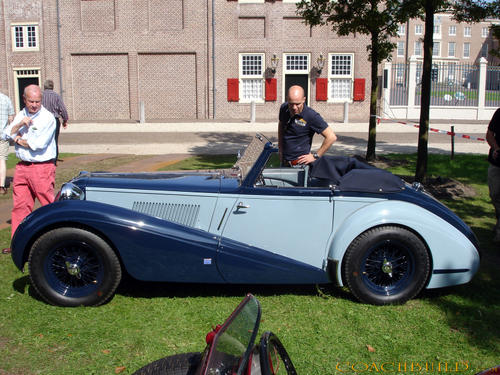 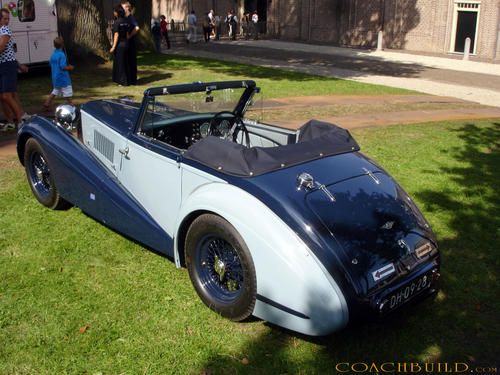 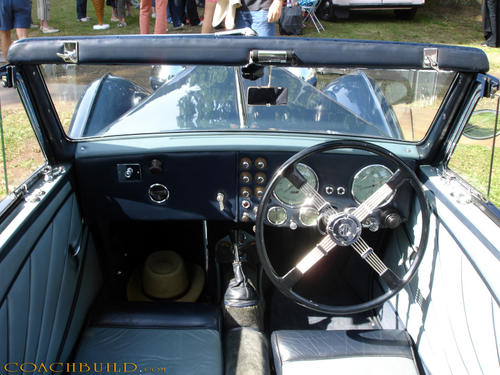 We have 7043 visitors online