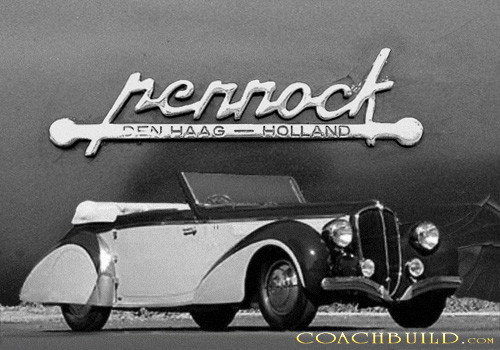 Pennock was a wellknown Dutch coachbuilder located in The Hague between 1900 and 1953. The Dutch company fabricated various coachworks for public transport vehicles, trucks and luxury motorcars. The coachbuild company from Johannes Jacobus Pennock Leonarduszoon fabricated many beautiful bodies on the chassis' of brands like Delahaye, Lagonda, Talbot-Lago, Austin and Armstrong Siddeley. 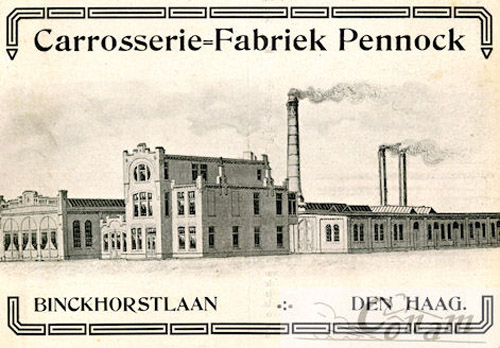 Pennock factory, The Hague, The Netherlands

Most of the manufacturers of the day offered their customers two choices when purchasing: either a ready built car as from their standard catalogue or a coachbuilt model by an independent supplier. During the thirties and forties, the coachbuilder's trade thrived and well-heeled clients could choose from any number of exotic companies to body their cars. Delahayes, for instance, were bodied by Chapron, Labourdette, Franay, Saoutchik and many more and in this case: Pennock.

Pennock is especially well known for their 'un-Dutch' flamboyant designs on Delahayes. Delahaye had no in-house coachworks, so all its chassis were bodied by independents, who created some of their most attractive designs on the Type 135. Also Pennock used mostly the 135 chassis. Below you see a very special 1938 135M. Only two were made, one of them was commissioned by Prince Bernard of The Netherlands. 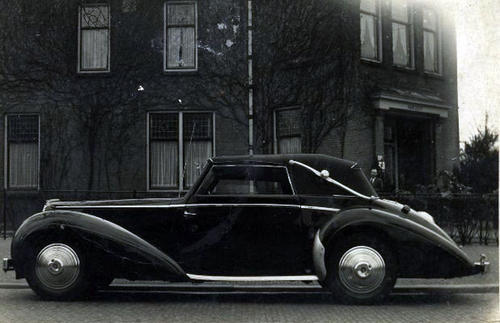 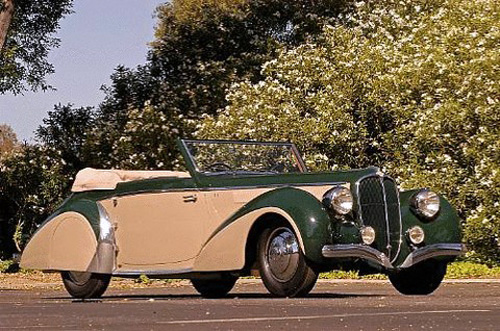 European car design was heavily influenced by Detroit and the move towards mass production, but the Dutch coachbuilder resisted the temptation to lose the definition between the bonnet and wing design of his flamboyant cars. Using minimal timber framing his coachwork was welded to the chassis, providing a rigid structure which was taut and rattle free to drive in comparison with many other coachbuilt examples.
All Pennock bodies were different in details and measurements. 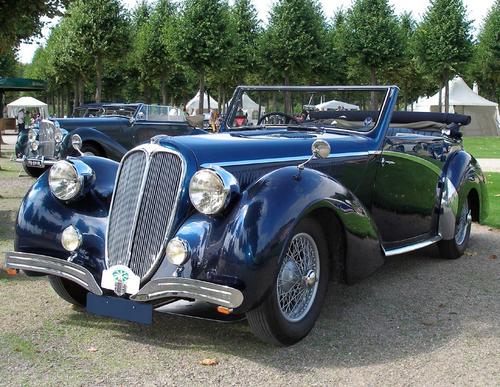 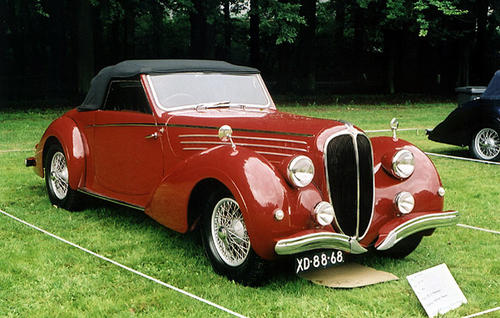 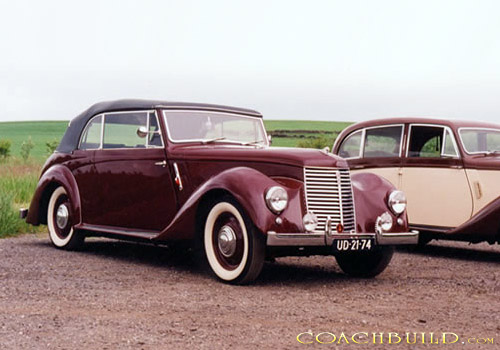 The car shown below is an Austin Sheerline Princess, which was built for the Dutch Royal Household.

In 1950 Queen Juliana of The Netherlands ordered Pennock to construct a six cylinder convertible. She had once been driven around in a lengthened Renault in Paris and decided she wanted something similar. The Austin Sheerline Limousine DM1L (left hand drive) rolling chassis was delivered by the Rotterdam Austin Dealer Stokvis & Sons and found it's way to Pennock by the end of january 1951. All drawings were lost but the final invoice from Pennock to the Royal Household shows that the car was completed in february 1952. This unique Double Convertible Town Car featured beautiful inlaid woodwork and flagstaffs in the front fenders. 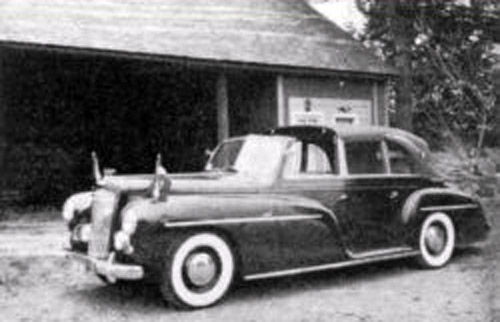 The Dutch Royal household sold the car in 1958, because it was eventually considered too large. After 1960 the car was moved through several owner's hands in the United States, but was eventually found in a barn, where it had been standing still for a long period of time. Recently the car was brought back to Holland by a Dutch collector, who tracked the car through the internet. The car is in a heavily used condition, but the new owner is planning a restoration.

Lagondas from The Hague.

The wonderful Lagonda shown below is the only LG6 Drop Head Coupe (chassis 12341) ever imported to the Netherlands. The body was originally built by Lagonda and was restored in 1950 by Pennock and the car is given a larger boot as the owner wishes. Read the entire history here . Unfortunately, being converted after more than ten years, this car can not be considered as a period rebody. 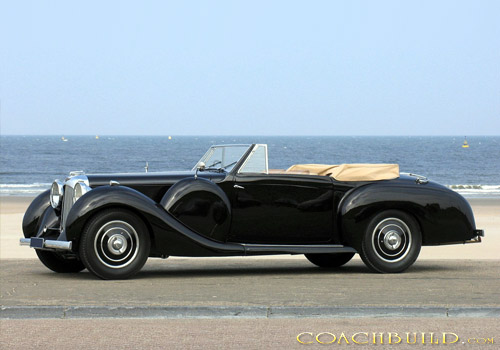 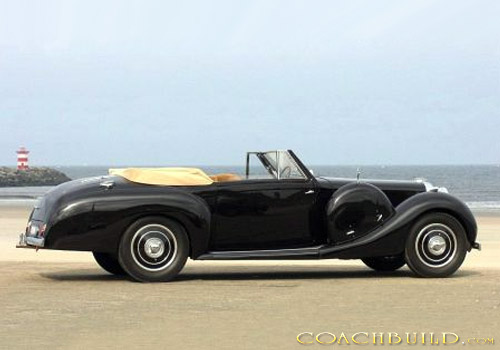 Below is unique Pennock bodied Talbot Lago T26C Grand Sport, which has a Coupe body with quite a peculiar styling. It was built for endurance racing and rallies and was based on the Type 26 Grand Prix car. This flamboyant coupé is propelled by a big and powerful 4.5 litre 6-cylinder in-line engine with double camshafts. It recently came back to Holland after having spent 43 years in the USA but was never shown anywhere. These pictures were taken at the Concours d’Élegance 'Paleis het Loo' in Holland where the car made it's first re-appearance after 43 years. The car is in original good condition and therefore didn't need restoration, but at first the car wouldn't start. It seemed the ashes from the former owner had to be removed from the car first. 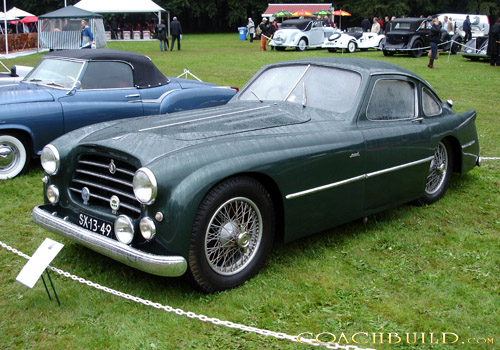 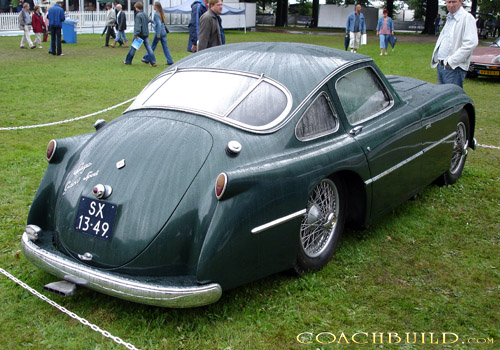 Apparently it was the last body built by the Dutch Pennock company, before it closed down in 1953.

We have 7454 visitors online