An artist’s discovery of Streamline Moderne 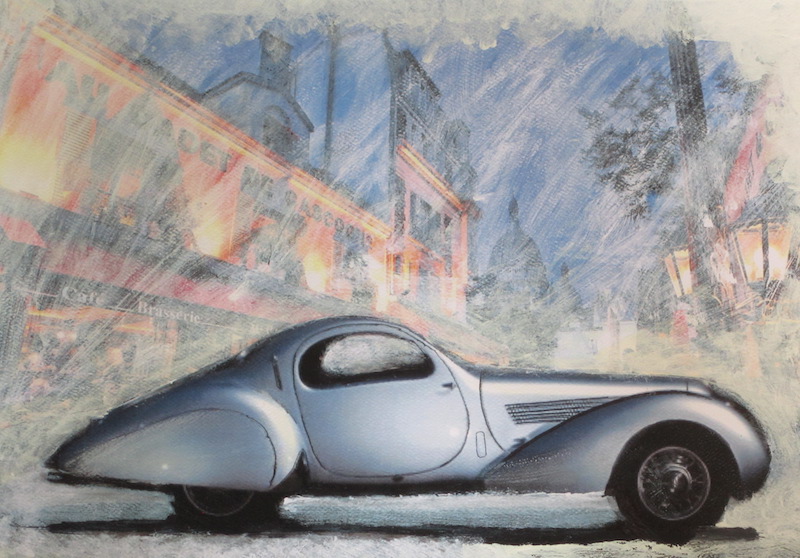 Automotive artists tend to pick their era. They like ‘50s cars, they don’t like prewar cars, they like hot rods, they don’t like sports cars. But I as a latecomer to the fine art world (for 40 years I was an automotive historian and ad copywriter) have come to greatly admire the body styles that fall into the classification of “Streamline Moderne”; a trend that started in the 1920s and picked up steam, inspired by not the Space Age (which was still decades into the future) but the airplane age, particularly the Schneider cup air races, where planes were becoming notably faster each year by virtue of new aerodynamic fuselage changes. 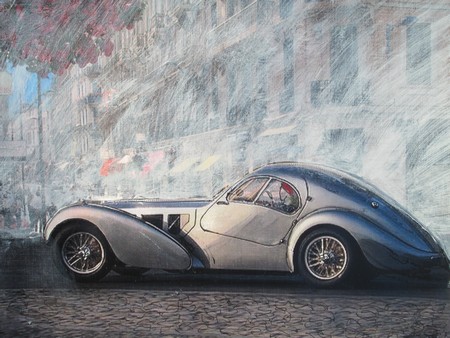 One of the first things coachbuilders copied from airplanes was the “blister”-shaped covers for the fixed landing gear (when the wheels were not yet retractable) and so essentially half of a blistering fairing was used to cover the rear fender cutouts to make them more aerodynamic.

Here's some of the other popular features of cars that fall into my own definition of Streamline Moderne:

Since they did not have wind tunnels then, no one knows if all these body smoothing tricks resulted in noticeable decrease in the Co-efficient of drag (Cd ratio).

But only a few race drivers cared about that. The important thing was that the Streamline Moderne era led to cars as a part and parcel of the fashion world. It’s no coincidence that there were concours d’elegance (such as in France and the UK) where women’s fashions were tied in with one-off cars exhibiting the Streamline Moderne style. In some cases the woman with the car wore clothes in matching color (in extreme cases, dying the poodle’s fur to match!).

This was not a playground for the middle class, no, the most flamboyant Streamline Moderne cars were also expensive cars because the customers ordering them could afford to have the coachbuilders go all out and create unique body shapes.

FRENCH WERE THE LEADERS

There is no doubt, going by the last decades’ concours results, that the French coachbuilders were leading the charge, not only on French marques but on British chassis brought across the pond.

English coachbuilders were right behind the French in going aero, but their Streamline Moderne is not celebrated as much. The Italians also got into it; but the war pretty much ended the contest among all the automakers as the practice of having a coachbuilt car began to die out in the postwar age of mass production. Sadly, the coachbuilders began to die off one by one, some reverting to mass production; others hanging up the tools; no longer relevant.

But now through concours d’elegance like the Pebble Beach Concours, and Chantilly Arts & Elegance in France, there is a rediscovery of the beauty; the rightness of automotive coachwork being thought of as a fashion statement.

Here’s some of the most famous French coachbuilders.

DE VILLARS
This company, called De Villars, was established in Courbevoie by Frank Jay Gould, an American billionaire, in 1925 to make bodywork for the cars of his compatriots residing in France. He named his son-in-law Roland De Graffenried De Villars as manager and that’s the name that went on the coachbuilder’s badge.

They didn’t do that many cars, but most of them were for the crème de la crème of society, on such chassis as DELAGE, HISPANO-SUIZA, MINERVA, RENAULT; with the best examples on DELAGE or DELAHAYE. The war did them in though at least the factory was bought in ’45 by Jean Daninos who created Facel Vega, which made some elegant cars, though not elegance in the same flamboyant style as the pre-war coachbuilders did.

LETOURNEUR & MARCHAND
This Carrossier was in Neuilly sur Seine, started when two coachbuilders working for Henri Binder, Jean-Marie LETOURNEUR and Jean-Arthur MARCHAND set up their own bodywork business in 1905. They quickly moved up from ordinary middle class cars to the most prestigious chassis. They became the coachbuilder of choice for DELAGE and partnered with them on a subsidiary, AUTOBINEAU.

AMERICANS IN PARIS
One of the great regrets of my life is that I was at a concours in 1965 where Howard “Dutch” Darrin was a judge but did not ask him about his time in Paris. Howard Dutch Darrin had earlier co-founded with Raymond Dietrich the firm LeBaron in the USA. But what American could resist going to Paris between the wars, where the partying was, reportedly, non-stop? So at a certain point in 1926, Darrin combined with another American Thomas HIBBARD. One of their first designs was a convertible roadster that can be found on many a prestigious chassis. When Tom Hibbard went back to America in 1931, a man named Fernandez, identified in history as a south American banker, joined the company and his name was included in the coachbuilding badge. 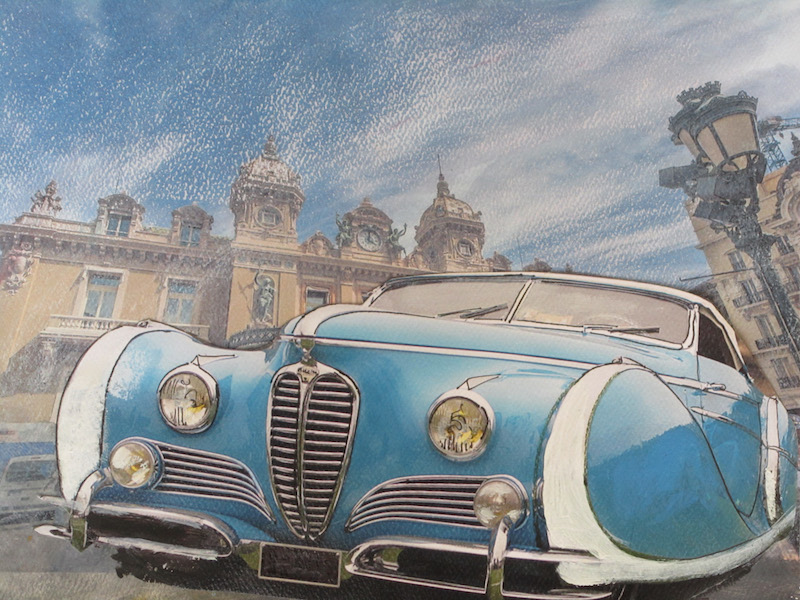 SAOUTCHIK
Saoutchik is famous as a French coachbuilder, operating in Neuilly sur Seine but he was originally from the Ukraine. He began doing coachworks in 1906 and in the 20s worked on a lot of open cars. This was before Germany was threatening France again and, before hostilities began, he made a name with Mercedes cars. He was remembered for working a lot with chrome and nickel silver decorations and for very neat interior fittings.

In other words, the ambiance had changed after the war, you could no longer "justify" a 25-foot long two seater car with spats front and rear. Cars had become slightly more practical, even luxury cars. 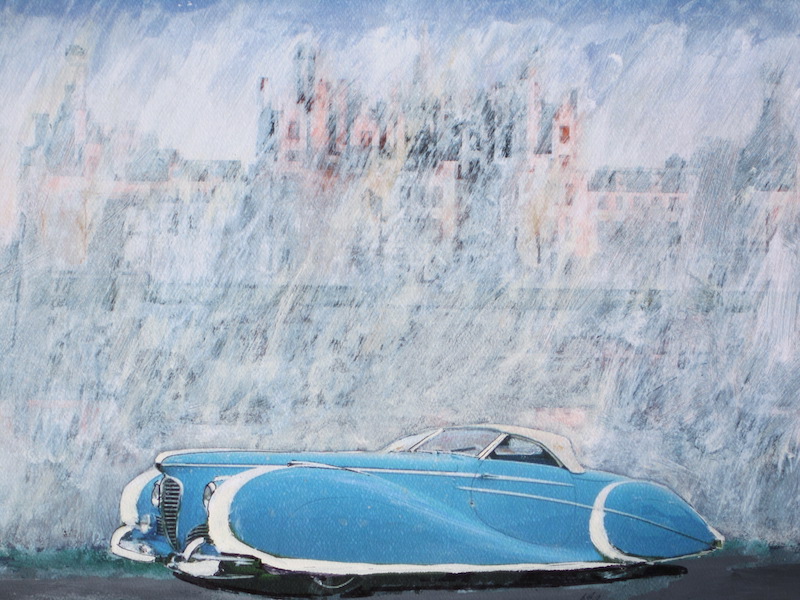 ONE FEATURE THAT SURVIVED

Some coachbuilders are known more for one feature they developed that survives today. Such was the case of Marcel POURTOUT, a coachbuilder in Bougival first, then later in Rueil-Malmaison. His company was formed in 1925, and was a pioneer in cross-country creations, working with LANCIA-FRANCE.

POURTOUT
Pourtout was associated with EMILE DAR. Pourtout had the honor of creating something for streamline modern that has re-appeared every few decades - the great contribution was the disappearing hardtop, already available on French cars even before WWII but didn’t get offered in America until the 1957 Ford retractable.

FIGONI & FALASCHI
Giuseppe (or Joseph) Figoni was born in 1894 in Piacenza, Italy. When he was still a little boy he emigrated with his family to Paris. He started working as an apprentice at a wagon builder at the age of 14 and he soon seemed to be a true artist in metalwork. He left to fight in World War I and when he returned he opened up a body repair shop in Boulogne-sur-Seine, a suburb of Paris. He began by modifying the coachwork of touring cars and eventually the quality of his work allowed him to establish a prosperous business. By 1925 Figoni was building complete bodies on a variety of chassis, including a.o. Delahaye, Bugatti, Renault, Delage, Panhard and Alfa Romeo.
In 1935 Figoni acquired a partner, businessman Ovidio Falaschi, who also originated from Italy, creating Figoni & Falaschi. This partnership created some of the most memorable designs of the 1930s through 1950s. Falaschi kept an eye on the finances while Figoni provided the designs.
Figoni was fascinated by the emerging aircraft industry and was much influenced by the shapes of airplanes. Much of his work centered around aerodynamics and creating the allusion of motion even at a stand-still. He started with a simple sketch, reproducing the design by affixing narrow iron straps to the chassis and then created a wood frame in ash to which the hand-formed sheet metal was attached.
Figoni's fascination with tear drop shapes caused a sensation at the Paris Auto Salon of 1936 when he presented a Delahaye 135 with elliptical shapes and enclosed tear drop shaped pontoon fenders, which he called "enveloppantes". Figoni went on to create another icon of the streamlining era; the Talbot-Lago T150C SS Tear drop Coupe. 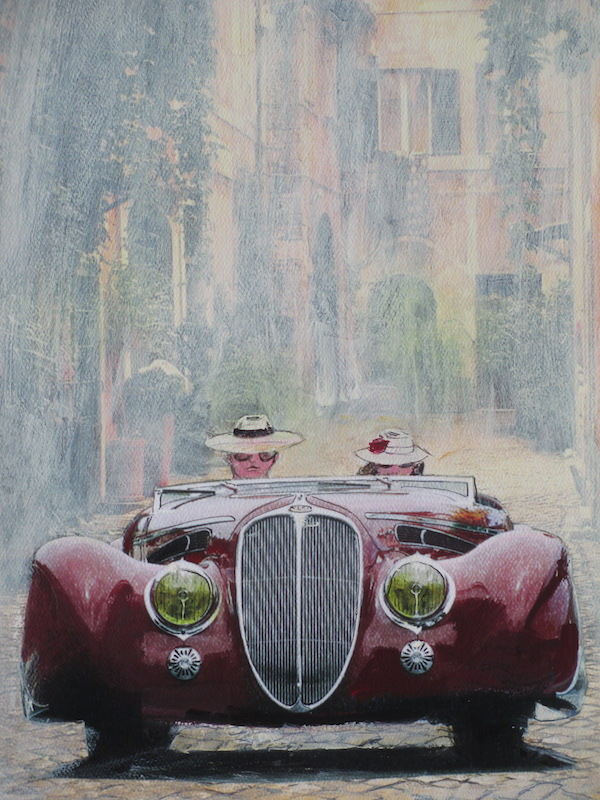 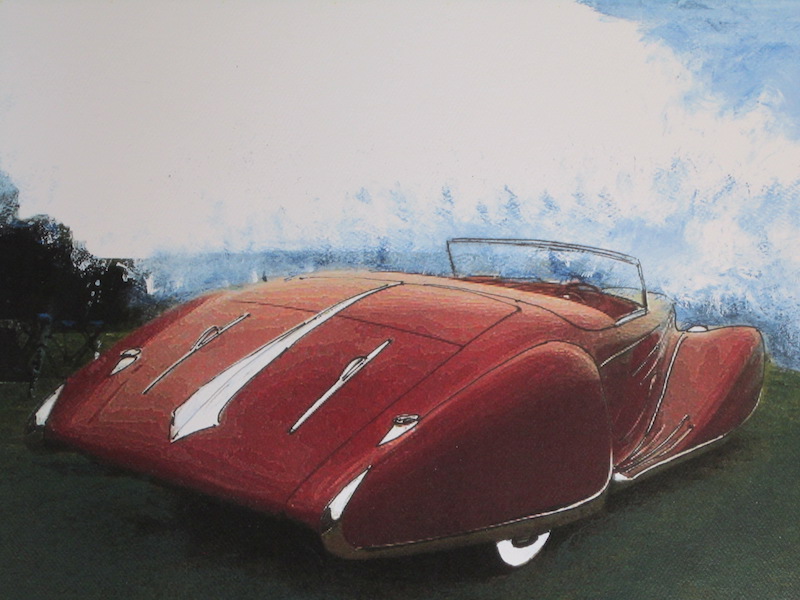 VANVOOREN
Located in the western Paris suburb of Courbevoie, almost concentrated on producing car bodies for luxury cars, being closely associated, during the 1930s, with the products of Hispano-Suiza, Bugatti, Rolls-Royce and Bentley.

It helped if you were a prestige car coachbuilder, it helped if you had a fancy showroom in Paris. Vanvooren had a show room at 33 Rue Marbeuf in the exclusive 8th arrondissement of Paris.

Now one-off commissions for custom bodywork are the ultimate but you can’t always count on those so next best is a contract from a prestige automaker. Vanvooren was assigned to do 20 Bugatti Type 57s, including four cabriolet bodied Type 57S models. But the ultimate Bugatti touring car (as opposed to race cars) might be the one they built at the end of the decade, in 1939, when they were commissioned to provide the coachwork for a unique Type 57 as a wedding present for the future Shah of Iran, Mohammad Reza Pahlavi. The irony was that the Shah, when asked about the car he wanted, picked a Delahaye by Figoni & Falaschi on a Delahaye 165 chassis but that car had been spoken for so the French government got a smaller copy made on a Bugatti chassis. So ironically, Vanvooren’s wildest design is a copy of another coachbuilder’s work. 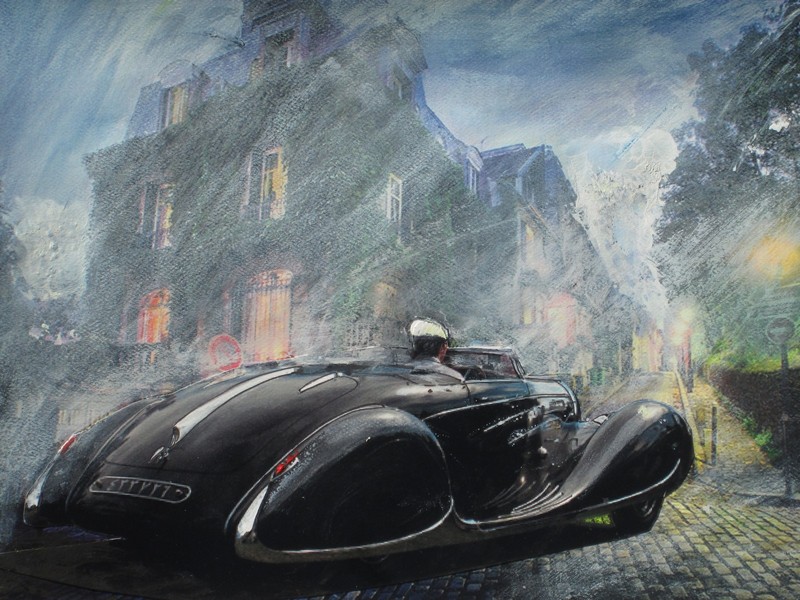 They did their best work on such marques as Hispano-Suiza, Bugatti, Rolls-Royce and Bentley.

One of the most significant cars they ever did was “lost” physically and credit wise, overshadowed by the war.

The Bentley Mark V "Corniche" was designed to succeed the Bentley 4¼ Litre in 1940. The design was done by the Paris-based dentist and part-time car designer Georges Paulin; Vanvooren was lined up to do the production versions. Then, after seven Mark V "Corniche" chassis arrived in Paris, and four had been bodied, the German invasion came. The prototype, identified by Chassis number 14-B-V was damaged in testing. And then while awaiting transport back to England, it was bombed on the dock in Dieppe! Eventually after the war, the Bentley Continental fastback used some of its ideas, so you could say the most elegant British car for some time was actually originally designed in France. 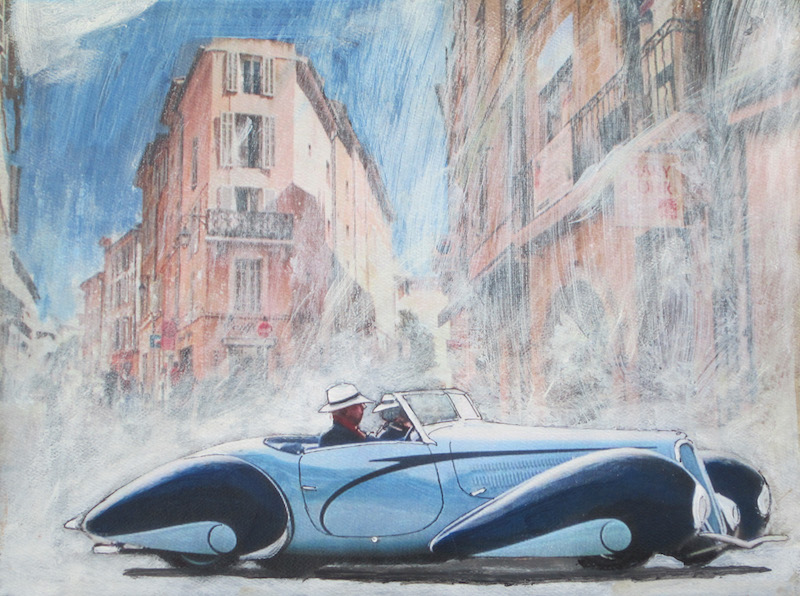 So it is; the flamboyance of Streamline Moderne is now fully recognized, and as with my own case, creating new fans, eager to see new found and newly restored examples from that bygone era in car design. The result is that obscure cars that were once bypassed because their provenance was unknown, are now being brought out of the barns and restored…

THE AUTHOR/ARTIST Wallace Wyss is a Southern California based fine artist who, on commission, paints oil portraits of significant cars. To discuss commissions, he can be reached at This email address is being protected from spambots. You need JavaScript enabled to view it.

We have 5188 visitors online