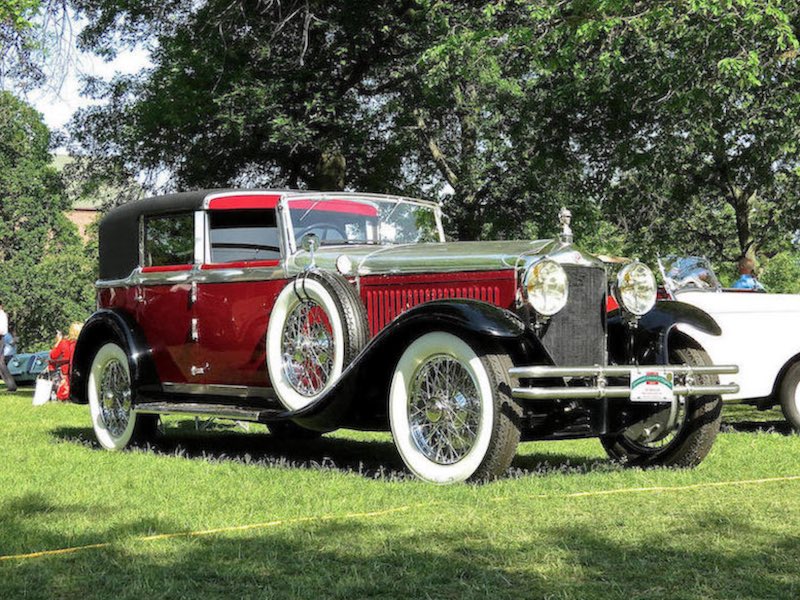 Coachwork by Hibbard and Darrin

Minerva was one of the first manufacturers in the world to adopt the Knight-type sleeve valve engine that did away with conventional poppet valves. In these motors, a sleeve fitted between the piston and the cylinder wall slid up and down in a synchronized movement, so that ports in the sides of the sleeves aligned with the inlet and exhaust ports of the cylinders at the right moments. Volumetric efficiency and longevity were good. The main drawback was high oil consumption, as the sleeves moved in a bath of oil, resulting in the thick smoky exhaust. But this was outweighed by the wonderful smoothness and silence of a Knight when compared to the coarse running and loud clacking noises made by the conventional valve gear of competing engines.

For these reasons, a good many upscale marques in the 1920s, including Voisin, Panhard, Peugeot, Mercedes and Daimler, favored Knight engines in their luxury products. But more than any, it was Minerva that became synonymous with the sleeve valve. The company was founded in Antwerp, Belgium in 1897, and like others, began by manufacturing bicycles. Motorcycles followed soon after, and in 1899, Minerva displayed a small voiturette as well as a delivery vehicle at the Salon in Antwerp. This was followed by a number of chain-driven two, four and six-cylinder models. In 1907, the impressive 40 CV type K was introduced, fitted with modern shaft drive and a 6.2 liter T-head six-cylinder engine that made a hefty 60 bhp. This quality chassis was good for a steady 60 mph, even when fitted with luxurious coupé chauffeur coachwork.

The 1908 London Motor Show was a watershed moment for Minerva. Alongside conventional T-head models, a new 38 CV four-cylinder Type S was revealed, powered by the novel four-cylinder sleeve valve engine that had been licensed from its inventors, Charles Y. Knight and L.B. Kilbourne. The model simply set a new standard for silence and smoothness, and its success during the 1909 model year was such that from 1910 Minerva dropped all conventional models with their strident tappets and valve guides.

Minerva had now become an internationally recognized manufacturer of technologically advanced quality cars. By 1912, the work force had grown to 1,600 employees who turned out 1,200 chassis. In the following year, the numbers had grown to 3,000 workers and 3,000 chassis respectively. Minerva sleeve valve engines were held in high regard, and the supply of motors to other auto makers became an important sideline. Mathis in Strasbourg and Mors in Paris became customers. England was a major export market, and recognition came from the highest places: King Albert I of Belgium let himself be chauffeured in a Type S. Complete cars could be had with factory bodies in many styles, but chassis were of course also available to the trade. Production was curtailed by the outbreak of World War I.

At the beginning of hostilities, a few armored cars were manufactured on Type 38 chassis, but Antwerp fell after heavy shelling on 10 October 1914. The factory was confiscated by the Germans and turned into a repair facility for their military vehicles. When the Armistice came in 1918, the facilities had been severely damaged. But like many makers in war-ravaged Europe, Minerva rose from the ashes and entered the post-war market in 1919 with new models that benefitted from the technological advances the War had brought. First came a 20 CV four, followed by a 5.3 liter 30 CV six. Production rose and peaked at 2,500 to 3,000 chassis in 1925 to 1926.

The traditional flat Minerva radiator with shoulders now became rounded and assumed a basic shape that would characterize the marque to the end. The famous radiator mascot depicting the head of the goddess Minerva was first used in 1923. There would be a number of permutations in the following decade and a half. The 1920s were an uneasy market for Minerva. There were limits to how many expensive cars the home market could absorb, especially since Ford, GM and Chrysler had set up factories in Belgium, followed by Citroën and Renault. All did their best to flood the market, so exports remained crucial to Minerva. Some successes were achieved in spite of the odds. In 1922, the American importer Paul Ostruk ordered no less than 200 of the big 30 CV chassis to be bodied by D'Ieteren.

By the latter half of the 1920s, approximately 1,000 Minerva chassis per year were going to England, where its price was slightly lower than that of a small Rolls-Royce and a lot less than a Phantom. The cooperation with Ostruk continued. In France, Hibbard & Darrin and later Fernandez & Darrin were successfully designing bodies on Minerva chassis to client order and having them built by D'Ieteren who had lower construction costs than the famous French carrossiers. In his memoirs, Howard "Dutch" Darrin vividly recalled how he would take the morning train from Paris to Antwerp to drive finished cars back to Paris overnight for customer delivery the following morning.

But even as the Roaring Twenties were coming to an end, there were great things in store. In 1927, the magnificent six-cylinder, 100 hp 6 litre Type AK was introduced. Minervas were now truly large cars to rival a Lincoln or a Cadillac for size: the AK rode on a 149.5 inch wheelbase, longer than a Hispano-Suiza H6B. Factory bodies were often conservative, but every-once-in-a-while the best coachbuilders such as Murphy in America or local Van den Plas came up with some truly stunning examples. In October 1929, Minerva's swan song was introduced at the Paris Salon. This was the fabled 40 CV. Eight cylinders, a displacement of 6.6 litres and an intergalactic wheelbase of 153.5 inches that matched the LWB Model J Duesenberg ensured a car with a road presence no one was likely to forget. Today, few Minervas remain. More's the pity. Still silent, they attest to the glory of a once-great marque.

Tom Hibbard and Howard "Dutch" Darrin were American carrossiers. Tom Hibbard had learned French with the American Expeditionary Force in World War I. He and Ray Dietrich left Brewster to establish LeBaron Carrossiers with Ralph Roberts and when New York Minerva agent Paul Ostruk commissioned two LeBaron bodies to be built in Brussels, Hibbard got a ticket to Europe to oversee the project. Later in Paris, Hibbard met up with Dutch Darrin and the two soon established Hibbard & Darrin with a showroom on the Champs d'Elysees.

From that modest beginning some of the most appreciated coachwork of the classic era emerged. Hibbard's deft sense of proportion, balance and design complemented Darrin's salesmanship, intrigue with intricate mechanical details and social contacts to make Hibbard & Darrin one of the most important coachbuilders of the period.

One of their patented design forms was their 'Silentlyte' bodywork, which arrived in the late 1920s and consisted of an all-aluminum structure, constructed in sections and dispensed with the need for underpinning with a wood frame. Naturally, this had advantages in terms of refinement of weight, and was very modern for its day. Although Pierce-Arrows of the pre-teen era had pioneered this in period, these were formal bodies, or convertible sedans built in this manner. As for Minerva, with the depression just around the corner, their moment in the sun was brief.

This majestic Minerva heralds from those bygone days of the Roaring Twenties, when business was good and the cars had their strongest following, and coupled with its revolutionary coachwork is a snapshot of this brief period for car manufacturer and carrossier. The car has been a familiar sight on the show circuit in recent years, being displayed at the Greenwich Concours d'Elegance, The Elegance at Hershey, The Concours of America and also here in Florida at the Winter Park Concours, receiving praise wherever it is shown.

When displayed at the Greenwich event, it was there that it was seen by Thomas Hibbard Jr., who stated to the owners that he thought it was a car that they had built for Randolph Hearst, when living on Long Island, something that is not proven, but certainly credible given the status of the car and his location in those days, when he gained the reputation that inspired F. Scott Fitzgerald's Jay Gatsby character.

Regardless of whether this lead of original ownership can be substantiated, it is known to have a series of higher profile ownerships during its life, once being part of the famed Pacific Auto Rentals Collection in California, when it is likely to have been used for movie work as so many of their cars served the local industry. It later passed to celebrated collector of rail and cars, Richard Kughn, of Detroit, then to Gerald and Scott Manning also of that same city.

The car arrived in the present ownership in 2012, at which point an exhaustive restoration was carried out, the results of which are simply stunning. Tailoring the color scheme to the body moldings, it is finished in polished aluminum and rich burgundy paintwork with a black ostrich front compartment and grey rear. Accented with exquisite chrome wires shod with whitewalls, the car makes a very striking presentation.

Rarely seen in America, this pinnacle of design and engineering is deserving of the closest inspection and sure to continue to garner accolades.

We have 9572 visitors online