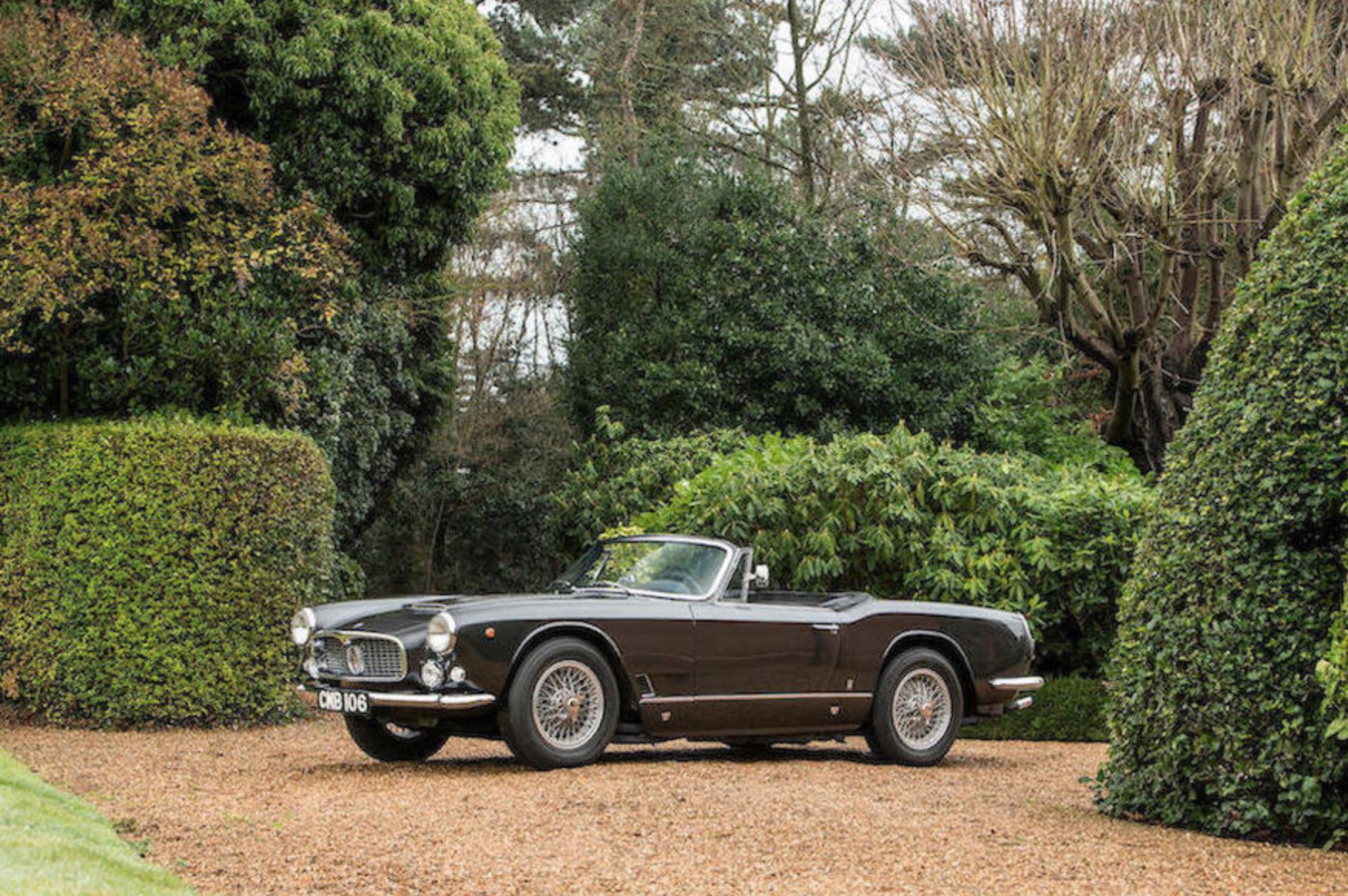 'The 3500 GT Maserati is a much underrated motor car, being overshadowed by the prancing horse from up the road in Modena. But it is not so long ago that the prancing horse was very much on the prongs of the Maserati trident in motor racing and there is that lovely big six-cylinder engine under the bonnet to remind one of the glories of the 250F.' - Edward Eves, Autocar 3rd July 1976.

Despite numerous racetrack successes that included Juan Manuel Fangio's fifth World Championship - at the wheel of a 250F - and runner-up spot in the World Sportscar Championship with the fabulous 450S, both in 1957, the marque's most successful season, Maserati was by that time facing a bleak future. Its parent company's financial difficulties eventually forced a withdrawal from racing and Maserati's survival strategy for the 1960s centred on establishing the company as a producer of road cars.

The Modena marque's new era began in 1957 with the launch of the Touring-bodied 3500 GT, its first road model built in significant numbers. A luxury '2+2', the 3500 GT drew on Maserati's competition experience, employing a tubular chassis frame and an engine derived from the 350S sports car unit of 1956. Its designer was none other than Giulio Alfieri, creator of the immortal Tipo 60/61 'Birdcage' sports-racer and the man responsible for developing the 250F into a World Championship winner. The twin-overhead-camshaft, six-cylinder engine was a close relative of that used in the 250F and developed around 220bhp. Built initially with drum brakes and a four-speed gearbox, the 3500 GT was gradually improved, gaining five speeds, front disc brakes and, finally, all-disc braking. By the time the 3500 GT was discontinued in 1964, around 2,200 of all types had been made.

A car possessing such impeccable antecedents not unnaturally attracted the attention of Italy's finest carrozzeria: Allemano, Bertone and Frua all created bodies for the 3500 GT chassis. Most coupés were the work of Touring, while all but one (a Frua-bodied example) of the much less common Spyder version were the work of Carrozzeria Vignale. Introduced at the Turin Motor Show in November 1959, Vignale's Maserati 3500 GT Spyder was the creation of Giovanni Michelotti, at that time the company's star designer. Built on a slightly shorter wheelbase - 250cm as opposed to 260cm - than the coupé and constructed of steel panels rather than the closed car's aluminium, the Spyder lasted in production until 1964, by which time 242 (some sources say 245) cars had been made, representing a little over 10% of 3500 GT production.

Ordered on 12th August 1960 and delivered on 8th September of that year in a direct sale to a customer in Turin, chassis number '1027' comes with certification from Archivo Storico Maserati SpA confirming that it is entirely original. It is one of the later models with front disc brakes, and left the factory finished in black with brown interior. The car has a lined fabric roof. Subsequently, the Maserati formed part of the private collection belonging to the famous Swiss ice hockey player, Hans Dürst, from whom it was purchased by the present UK-based owner in 1997.

The car was first registered in the UK on 20th January 1998, and the owner immediately commissioned a mechanical overhaul and full repaint in Ferrari Canna di Fucile (gun barrel grey). At the same time, the interior was re-trimmed in black leather with grey carpeting. The convertible top is made of black mohair and has a lined interior.

We are advised by the vendor that the body remains in excellent condition and that the chassis is sound, with no signs of rust, while the engine is said to work perfectly, allowing the car to be used as a daily driver. With this in mind, a couple of minor modifications have been made: an alternator being fitted in place of the original dynamo, and the windscreen washer bag replaced with a proper, larger-capacity reservoir. Electro-hydraulic power steering has been fitted, and the driver's seat has been lowered slightly to accommodate a taller driver. This car also has a slightly deeper rear valance to hide the silencer. A defective radio is the only fault notified.

Some measure of this Maserati's quality may be gained from the fact that it was a class winner at the RAC Midsummer Drive-In Concours at Woodcote Park in 2011, while in 2013 it was accepted into the prestigious Villa d'Este Concours (confirmation letter available) though the owner had to decline the invitation because of a prior engagement.

Offered with FIVA passport, UK V5C Registration Certificate, and current MoT, this rare Vignale Spyder represents an exciting opportunity to acquire one of these most sought after of classic Maseratis.

We have 7987 visitors online