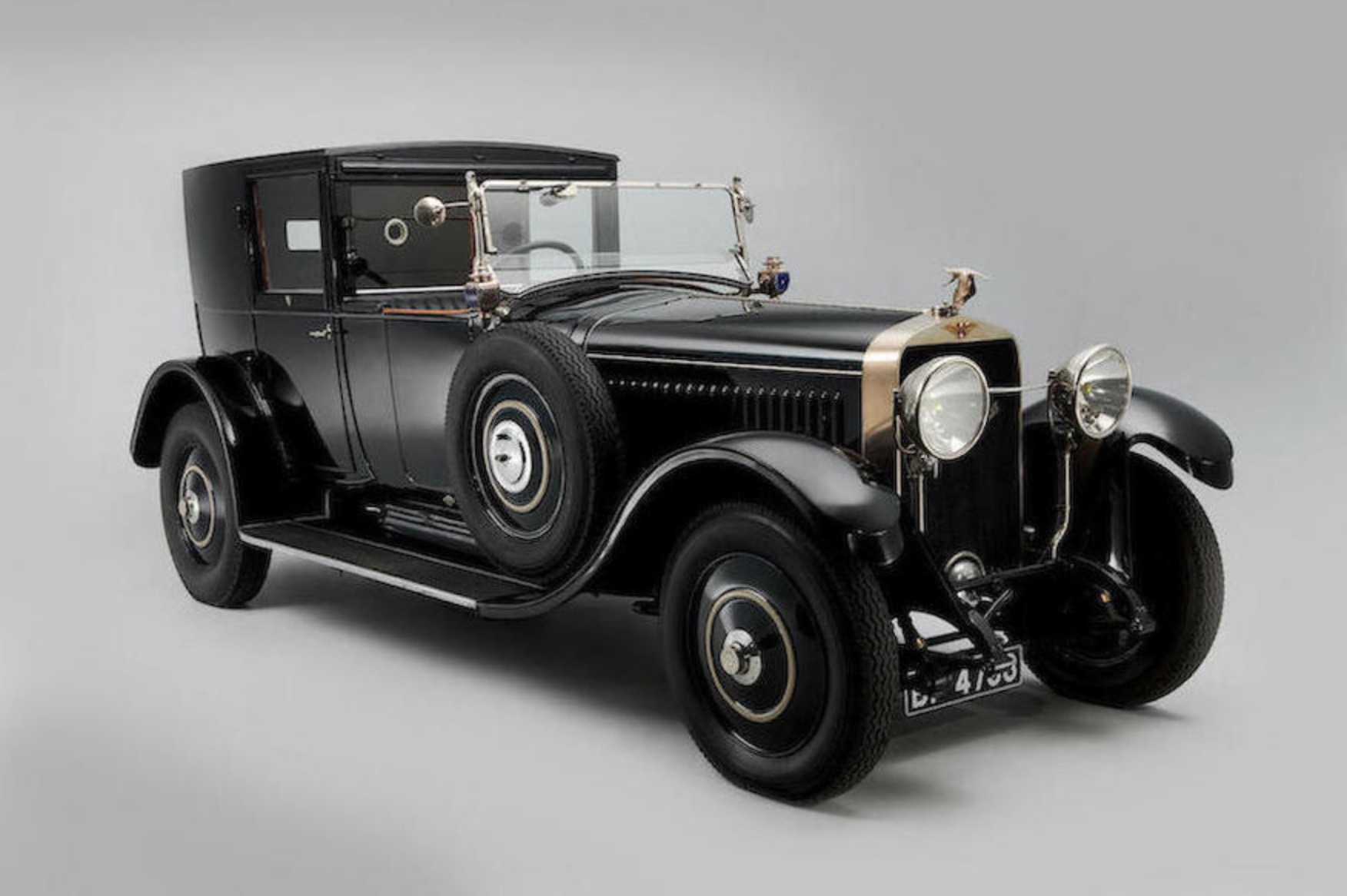 Chassis '11038' was despatched from the factory on 27th November 1924. First owner Mr Pierre Lorillard Ronalds had specified rakish, razor-edged Brougham de Ville coachwork by Carrosserie Kellner, one of a small select group of Parisian coachbuilders. Mr Ronalds came from the fabulously rich American Lorillard tobacco family of New York, one of the oldest in the USA. His home at 11, Rue de la Baume, remains one of the finest private houses in Paris. '11038' was his fourth Hispano-Suiza and he kept the car until his death in February 1928 when it passed to another Hispano-Suiza client, Madame Carmen de Romero of Paris.
We fast-forward to the summer of 1967 when photographer Ludo Pivron was filling his Delahaye 135MS at a petrol station in the French countryside. By habit he asked the attendant if he knew of any 'old cars' locally, and was referred to a local scrap dealer, in one of whose warehouses he was astonished to discover this Hispano. In a letter on file, Mr Pivron recalls that the warehouse was well ventilated and that the Hispano had been well preserved, surviving in remarkably original and complete condition, apparently having been driven in under its own power.

The asking price of 3,000 French Francs was more than Mr Pivron could afford, and a few weeks later he learned that the Hispano-Suiza had found its way to Paris where it was now for sale for 9,000 Francs! At this point the car was purchased by a friend of Mr Pivron, an industrialist, who after years of expert restoration returned this sumptuous H6B to its former glory.

The aforementioned industrialist was Alain Balleret, who during the 1930s was head of Hispano-Suiza's experimental department. In the 1970s, Alain Balleret founded the Hispano-Suiza Club of France, and until his death on 1st January 1988 organised numerous Hispano¬-Suiza tours including many in conjunction with the American club (see letter on file from Mr Balleret's daughter).

The H6B was restored by a master coachbuilder near St Etienne, Mr Saillant (now deceased), and was first used for Mr Balleret's daughter's wedding in June 1971. Since then it has taken part in many rallies including the Monte Carlo event in 1973. During Mr Balleret's ownership, '11038' shared a motor house with the fabulous one-off Hispano¬-Suiza 'Xenia', today in a US collection.

Following Mr Balleret's death, the Kellner-bodied Hispano-Suiza remained cosseted in the motor house at the family's chateau. Emerging in 2007, having last been used on the 2003 Barcelona-Paris Rally, it was delivered to Switzerland for professional re-commissioning. The carburettor was rebuilt by French specialist, Umpaler, and all the running gear was carefully checked, cleaned, and tested. The Hispano was then offered for sale at Bonhams' Olympia auction in December 2008 (Lot 682) where it was purchased by the current vendor.
According to the 2008 catalogue: 'A recent road trial saw the car performing strongly and briskly: oil pressure was good, steering and brakes precise and all mechanical and electrical systems worked correctly. Most surprising of all, on the straights this 84-year-old kept pace with modern traffic. The engine block has been carefully checked for corrosion... and given a clean bill of health.'

This quintessentially French Brougham de Ville, re-cellulosed in its period black livery, is magnificently equipped with original Bleriot dipping headlamps, a formidable Cicca brass-trumpeted Tenor electric horn, and windscreen-mounted opera side lamps. It is upholstered to the front compartment in black leather and to the rear in beige cloth, with rare Cuban mahogany cappings and original bone handles. Other luxury fittings include interior electric light, separate wind-down divisions to the front compartment, rear passenger vanity set, and a speaking tube.

Offering the very best of open and closed motoring, suitable for all climates and with ample room in the lavish rear compartment for guests or keeping younger passengers busy, this handsome Hispano-Suiza is the perfect motor car for entertaining, whether on the elite motor tour or premier Concours d'Élégance.

We have 7315 visitors online