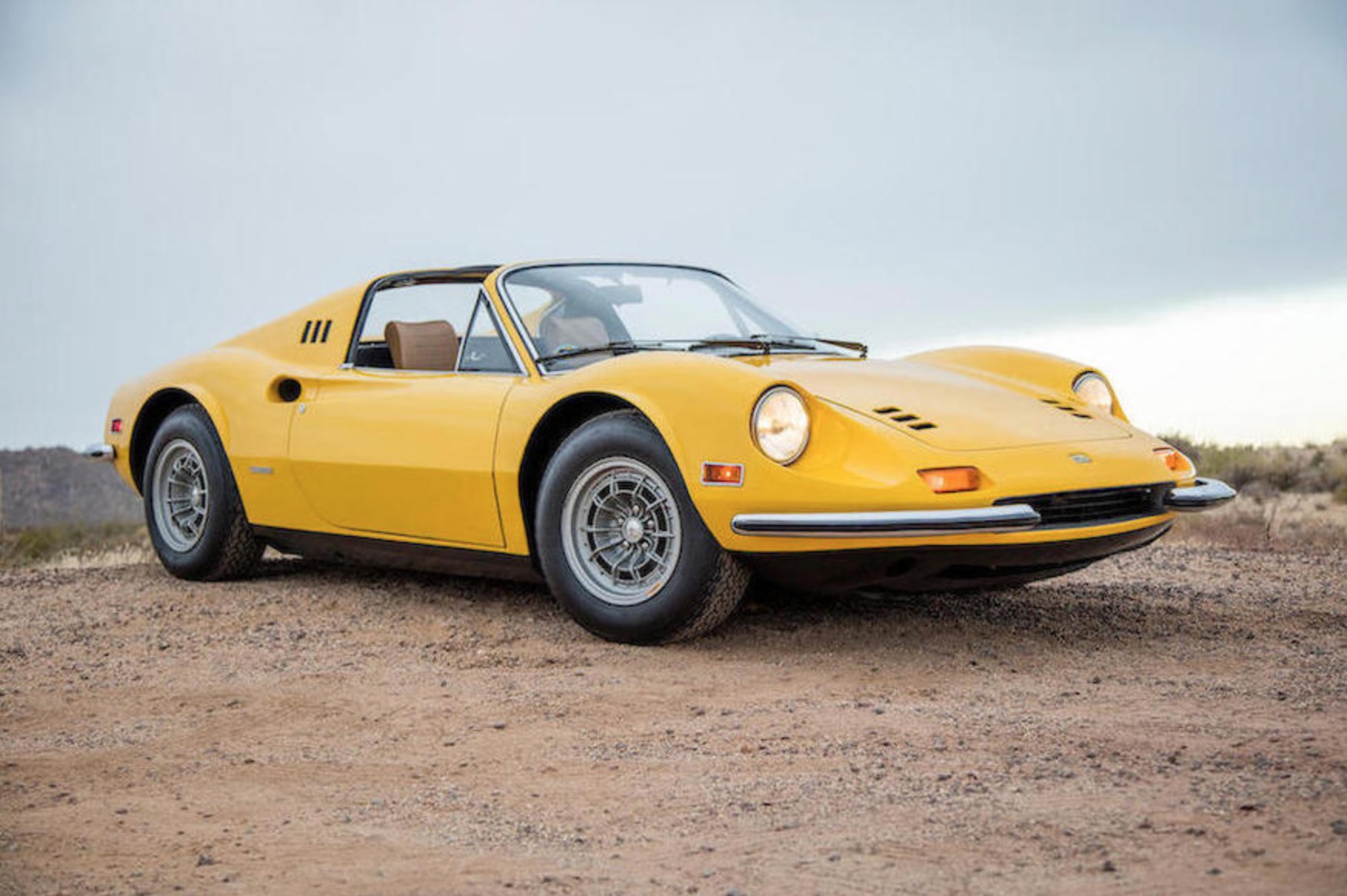 It was the need for a production-based engine for the new Formula 2 that led to the introduction of a 'junior' Ferrari, the Dino 206 GT, at the Turin Motor Show in 1967. Building on experience gained with its successful limited edition Dino 206S sports-racer of 1966, Ferrari retained the racer's mid-engined layout for the road car but installed the power unit transversely rather than longitudinally. A compact, aluminum-bodied coupe of striking appearance, the Pininfarina-styled Dino - named after Enzo Ferrari's late son Alfredino Ferrari and intended as the first of a separate but related marque - was powered by a 2.0-liter, four-cam V6 driving through an in-unit five-speed transaxle. The motor's 180bhp was good enough to propel the lightweight, aerodynamically efficient Dino to 142mph, and while there were few complaints about the car's performance, the high cost enforced by its aluminum construction hindered sales.

A 2.4-liter version on a longer wheelbase - the 246 GT - replaced the Dino 206 in late 1969. The body was now steel and the cylinder block cast-iron rather than aluminum, but the bigger engine's increased power - 195bhp at 7,600rpm - was adequate compensation for the weight gain. A Targa-top version, the 246 GTS, followed in 1972. While not quite as fast in a straight line as its larger V12-engined stable-mates, the nimble Dino was capable of showing almost anything a clean pair of heels over twisty going.

Testing the V6-engined Dino – the 246 GT – in 1972, the authoritative American motoring magazine Road & Track enthused, 'it is a thrill to drive a car like the Dino, one whose capabilities are far beyond what even an expert driver can use in most real-world motoring, and that is the Dino's reason for being. The real joy of a good mid-engined car is in its handling and braking and the Dino shone as we expected it to. The steering is quick without being super quick, and it transmits by what seems a carefully planned amount of feedback exactly what is going on at the tires. Thanks to the layout's low polar moment of inertia the car responds instantly to it. The Dino's cornering limits are very high... ' Truly a driver's car par excellence.

As the first series-produced, mid-engined Ferraris, the early Dinos are landmark cars, and the line they founded would prove to be an immense commercial success for Maranello.

Completed at the Ferrari factory in June of 1974, the exceptional example of the applauded Dino 246 offered here, chassis no. 08474, was built as the open GTS version in the E production series. Completed towards the very end and fully-evolved production run, this example was factory-equipped with desirable Daytona-style seats, and flared fender arches, to accommodate wider wheels and tires.

According to renowned Ferrari historian Marcel Massini, 08474 left the factory in Giallo Fly 20-Y-490 Yellow over a beige leather VM 846 interior with black inserts, and was distributed to the United States through Luigi Chinetti Motors, Greenwich, CT. A desirable list of optional extras was equipped to 08474 from the factory, including air conditioning, power windows, and the wider Campagnolo alloy wheels. This end-of-the-run, 'Chairs and Flares' Dino GTS was purchased new in 1974 by William Marsh of Muncie, IN, but was in 1975 sold to Bernard Kreisman of Wilmette, IL. In 1982, the Fly Yellow Dino GTS recorded a mileage of just 14,268 miles, and was in 1984 sold by Kreisman to Marc Tauber of New Jersey, who in turn sold the car a Mr. Lee Barba. Barba would keep 08474 until 1989, when the Dino was purchased in a trade deal by Bill Kontes of Mellville, NJ. Mr. Kontes recorded the mileage at 26,000 at the time. 08474 remained with Bill Kontes until 1996, when it was purchased by Eddie Karam, a well-known Ferrari aficionado and dealer from West Chester, PA. Mr. Karam kept 08474 for 20 years, during which time many other Dinos came and went through the Karam stable, yet 08474 in its exceedingly original condition and ultimate spec was not for sale!

Today, this exceptional 'Chairs and Flares' Dino 246 GTS continues to impress any Ferrari judge or collector who gets to admire it. The body is straight with a superb fit, and much of the factory applied Giallo Fly 20-Y-490 Yellow paint remains intact. The chrome is equally original and untouched, yet in remarkable condition. The original Campagnolo wheels are fitted with appropriate Michelin XWX tires, giving the car the elegantly aggressive look it would have had on the street during the mid-1970s. A matching Campagnolo spare is situated in the front storage compartment. Lights, lenses and glass is original and in excellent condition. Inside, the original interior presents beautifully, including the sensitive original mouse fur dash. The leather has a nice patina to it, and perfectly matches the documented 27,693 miles recorded on the odometer at the time of cataloging. A Bonhams representative recently had the pleasure of taking 08474 out on the open road for a lengthy test drive. Having driven many Dinos in the past, he was extremely pleased with just how well 08474 handles and operates. Shifting, braking and steering all had a very tight and uncompromised feel; one which can be hard to duplicate in a restored car. 08474 is accompanied with a large box of new and old spares, wheel chock, emergency triangle, spare light bulb kit, jack and tool roll, owners and service manuals in pouch, and the tonneau cover for the Targa top.

One of the best preserved Dinos we have ever had the pleasure of handling, this excellent example of the final-evolution Chairs and Flairs 246GTS Dino is perhaps the ideal representation of the model, and one which should attract an eager audience either on the show field or out on the road.

We have 8402 visitors online