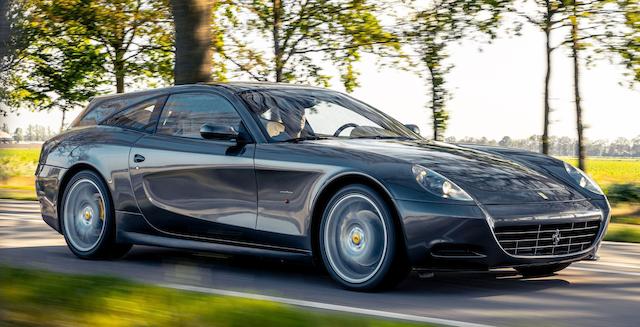 This stunning one-off Shooting Brake conversion of a Ferrari 612 Scaglietti was commissioned by the current owner (a great fan of shooting brakes), the task being entrusted to the coachbuilder Vandenbrink in Holland, who had first proposed such a modification as far back as 2009. Vandenbrink's mission is to serve customers that 'have a passion for the underlying automotive quality, aesthetic excellence and historical significance'.

The assignment was completed in 2018. Starting with a little used (28,000 kilometres) Ferrari 612 Scaglietti in a lovely colour scheme, Vandenbrink took 15 months and more than 2,500 hours to complete the transformation, which was to the highest standard. The hand-crafted aluminium body panelling was fabricated by van Roomen Carrosserie of Hoevelaken, while the rear of the interior was re-trimmed in leather to the highest standard by Carat of Liege, Belgium. Other special features include an electric tailgate and windows in the roof above the rear seat passengers, who also benefit from increased headroom as well as a more capacious luggage compartment. Vandenbrink's design retains the overall body form of the 612 Scaglietti and looks so right that it could easily be taken for a model built by the Ferrari factory.

In naming its new four-seater Gran Turismo after Carrozzeria Scaglietti, Ferrari had acknowledged the immense contribution made by its Maranello neighbour and close collaborator over the preceding 50 years. The 612's design brief called for a car capable of accommodating four adults in comfort - rather than being merely a '2+2' - without sacrificing any of the superlative driving dynamics excepted by dedicated Ferraristi. Introduced in 2004, the result was the biggest Ferrari road car ever, yet one that weighed less than the smaller 456M. The 'secret' lay in the 612's lightweight aluminium chassis: a mixture of extrusions, castings and panels, which replaced the traditional sheet-steel monocoque.

In styling the 612, Pininfarina paid homage to one of its most famous creations – the fabulous 375MM commissioned by renowned Italian filmmaker Roberto Rossellini for his wife, Ingrid Bergman, and first seen at the Paris Salon in 1954 – the long nose and scalloped sides of which find echoes in the Scaglietti. No content with merely shedding weight as a means of boosting performance, the 612 featured an improved version of the 575M Maranello's 5,748cc 65-degree V12 engine producing 540bhp and 434lb/ft of torque. The F1A transmission too had undergone significant improvement, incorporating extra synchronisation cones for swifter changes, while manual/automatic modes and 1st and reverse gears could now be selected using a gate on the centre console, rather than only by means of the steering-wheel paddles. Lighter, more powerful and endowed with superior suspension and brakes, the 612 Scaglietti lapped Ferrari's Fiorano test track some six seconds quicker than the 456M. Its top speed? 315km/h.

A work of art and the only one in existence, this wonderful Ferrari 612 Scaglietti Shooting Brake is offered with Spanish registration papers.

We have 7442 visitors online