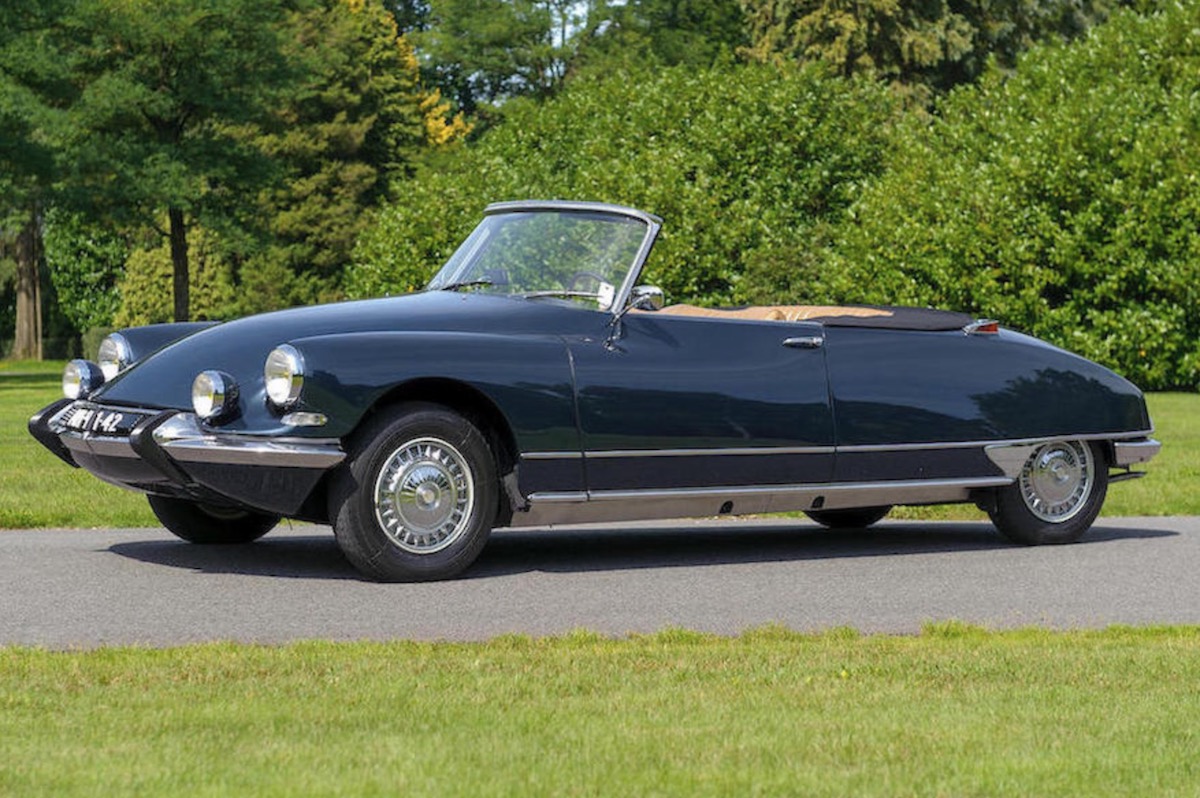 Just as it had done 21 years previously with the revolutionary 'Traction Avant', Citroën stunned the world again in 1955 with the launch of the strikingly styled 'DS'. Beneath the shark-like newcomer's aerodynamically efficient, low-drag bodyshell there was all-independent, self-levelling, hydro-pneumatic suspension; plus power-operated brakes, clutch, and steering. No European car would match the DS's ride quality for several years, the fundamental soundness of Citroën's ahead-of-its-time hydro-pneumatic suspension being demonstrated by its survival in top-of-the-range models until earlier this year. The DS's original 1,911cc, overhead-valve, long-stroke engine was replaced in 1966 by a short-stroke 1,985cc unit, also available in 2,175cc and 2,347cc versions, while other DS developments included swivelling headlights, fuel injection and a five-speed gearbox.

Other models offered alongside the original DS were the ID (a simplified, cheaper version), the cavernous Safari estate and the two-door Décapotable (convertible), the latter boasting coachwork by Henri Chapron. (Chapron's first convertibles had been produced independently of Citroën, but the factory eventually gave the project its blessing). Henri Chapron started his career in the motor industry as an upholsterer's apprentice, working for various coachbuilders in the Paris area. In 1919 he started his own business in the well-to-do Parisian suburb of Neuilly-sur-Seine where his main activity was re-bodying cars that had been requisitioned in wartime by the French Government. Chapron moved to larger premises in Levallois-Perret in 1923 and became the official builder of coach and convertible models for Delage and Delahaye, going on to body many of the most elegant French and European automobiles of the inter-war period.

Despite a much-reduced demand for bespoke coachwork after WW2, Chapron survived thanks to his exemplary creations for Delahaye, Talbot and Salmson, switching to offering bespoke versions of unitary construction models when motor manufacturers began to abandon the traditional separate chassis frame. The arrival of the Citroën DS in 1955 presented Chapron with a fresh opportunity that would result in his name being forever linked with this remarkable car.

Citroën's own Décapotables were built on the longer, stronger chassis of the ID Break (Estate) but the model was never produced in England, where Citroën's right-hand drive cars were assembled at its Slough factory up to 1966. In total, 1,365 usine (factory) convertibles were made with either the DS19 or DS21 engine between 1960 and 1971, while Chapron built a further 389 of his own, the last in 1973.

According to the Henri Chapron Attestation on file, this car was built by Citroën in November 1966 and sent to the Charon Factory in Levallois Perret on the 24th of that month. Production number '9088', this car was built in the Chapron workshops as were all the convertibles marketed by Citroën at this time. It was completed on 28th February 1967 and returned to Citroën to be sold by one of the company's concessionaires. Citroën had introduced the superior green Light Hydraulic Mineral (LHM) fluid on all hydro-pneumatically suspended models in September 1966, making this car one of the first to benefit from this advance. Having the pre-facelift nose and the green LHM system makes this car particularly rare; indeed we are advised that only 42 DS21 Décapotable models were completed to this specification.

On 27th March 1967 the DS was sold new via the Citroën dealer in Nice to its first owner, Mr Jean Thore of Eze in the South of France. Mr Thore and Mme Dominique Thore enjoyed the car for 34 years. They always kept it at Eze and covered approximately 90,000 kilometres during their ownership.

In 2001, Australian Mr John Plooy was looking for a 'green fluid' DS21 Cabriolet and chanced upon this car. He wanted to keep the Citroën in the Netherlands and use it for annual trips to Italy. When the car arrived in Holland, Mr Plooy immediately sent it to marque specialist Bart Kocken; it turned out to be in excellent original condition, with no rust or evidence of past accident damage. Mr Plooy commissioned a mechanical overhaul of anything that required it, and had the car repainted and a new convertible top fitted.

This Décapotable retains its original chassis, body panels, interior, Jaeger dashboard, carpets and FM radio, and is in excellent original condition overall, something seldom encountered with these cars. Mr Plooy drove the DS only some 10,000 kilometres over the years, and in 2017 decided to sell it, having reached the age of 80 years. Offered with its original tools, jack, Chapron paperwork, etc, this rare and ultra-desirable soft-top DS is ready for the next owner to use and enjoy.

We have 8396 visitors online