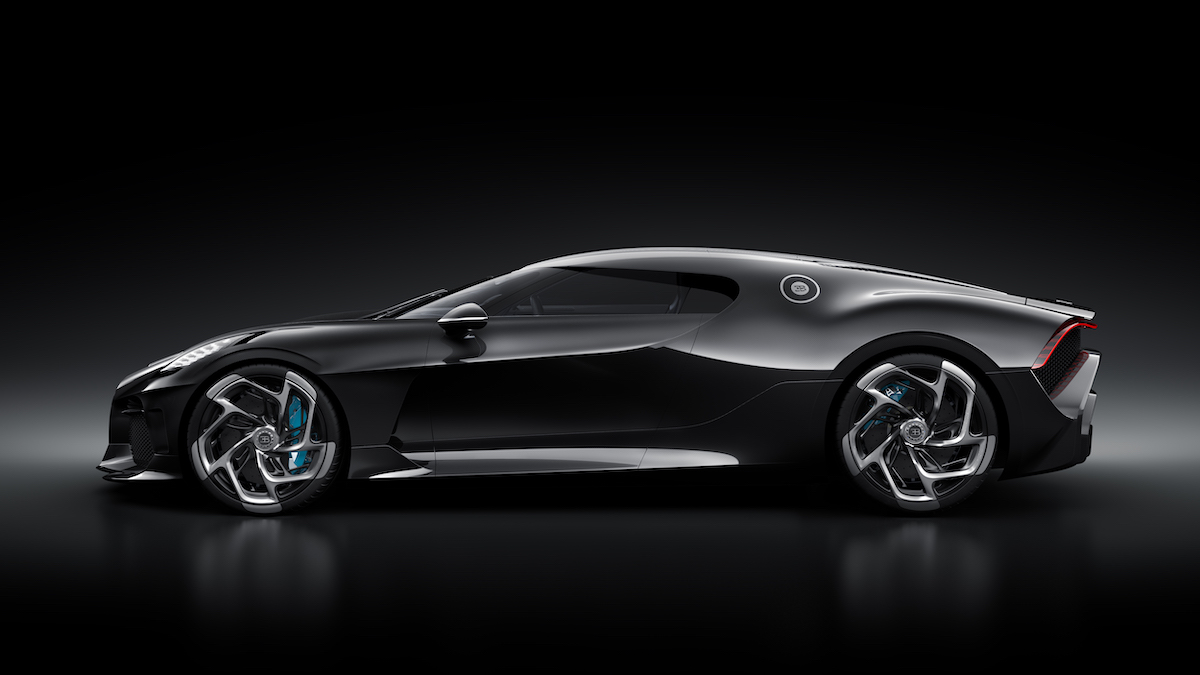 The Bugatti La Voiture Noire is a one-off supercar based on the Chiron. Unveiled at the 2019 Geneva Motor Show, it joins the Divo as a derivative from the already famous Chiron hypercar. The La Voiture Noire is a modern reinterpretation of the Type 57 SC Atlantic from the 1930s and was built to celebrate Bugatti’s 110th anniversary.

Unlike the Divo, a car that’s built in 40 units, the La Voiture Noire will remain unique. This vehicle was created specifically for a Bugatti enthusiast that’s "fascinated by the Atlantic," a coupe that the French firm built in the 1930s. Despite the unique bodywork and detailing, the La Voiture Noir remains a standard Chiron under the hood, so performance is similar to the vehicle it is based on.

The name "La Voiture Noire" actually dates back to the Atlantic from the 1930s. A version of the Type 57, the Atlantic is actually a generic name given to a run of five vehicles that were called either Aerolithe, Aero Coupe, and Atlantic Coupe, while also featuring 57 S or 57 SC badges.

It all started with the Aerolithe prototype of 1935 and continued with four production models finished in 1936 and 1938. Each of them were created individually for specific customers and had different details. Three or them are still in existence, but the fourth car disappeared before the German invasion of Alsace during World War II and it’s nowhere to be found, despite 80 years of efforts to uncover it.

The missing car bears chassis number 57453 and it’s the second Atlantic built. It’s known as the La Voiture Noire, from which the modern supercar draws its name, which translates to The Black Car. Finished in 1936 and showcased at auto shows in 1937, it was driven by Jean Bugatti himself for some time and then given to Bugatti race driver Robert Benoist for winning the 24 Hours of Le Mans race in 1937. Benoit gave it to another driver a few months later and the car made it back to Bugatti in 1939. The La Voiture Noire remained with the factory until 1941, when it was lost after being placed on a list of cars that were sent to Bordeaux during the French exodus.

That was the last mention about it, making the La Voiture Noire one of the most mysterious vehicle disappearances and an enigma that enthusiasts have been struggling to solve for 80 years.

Bugatti made notable changes to the base car’s profile. Compared to the Divo, the La Voiture Noire has a more angular roofline, a notable departure from the Chiron’s C-shaped trademark design, new side skirts, and less aggressive aero elements on the fenders. The wheels are particularly striking thanks to their two-tone design and the fact that the silver paint on the five spokes extends onto the tires.

The La Voiture Noire is a one-off, and the French firm won’t build another one like it. The unique status explains why Bugatti sold this car for a whopping €11 million before taxes. This converts to around $12.4 million as of March 2019, but word has it the owner actually paid around $18.9 million after taxes. This makes the La Voiture Noire the most expensive new car of all time. It was rumoured that Ferdinand Piëch was the buyer, but this is as yet unconfirmed. The question is: is it still for sale?

We have 7272 visitors online