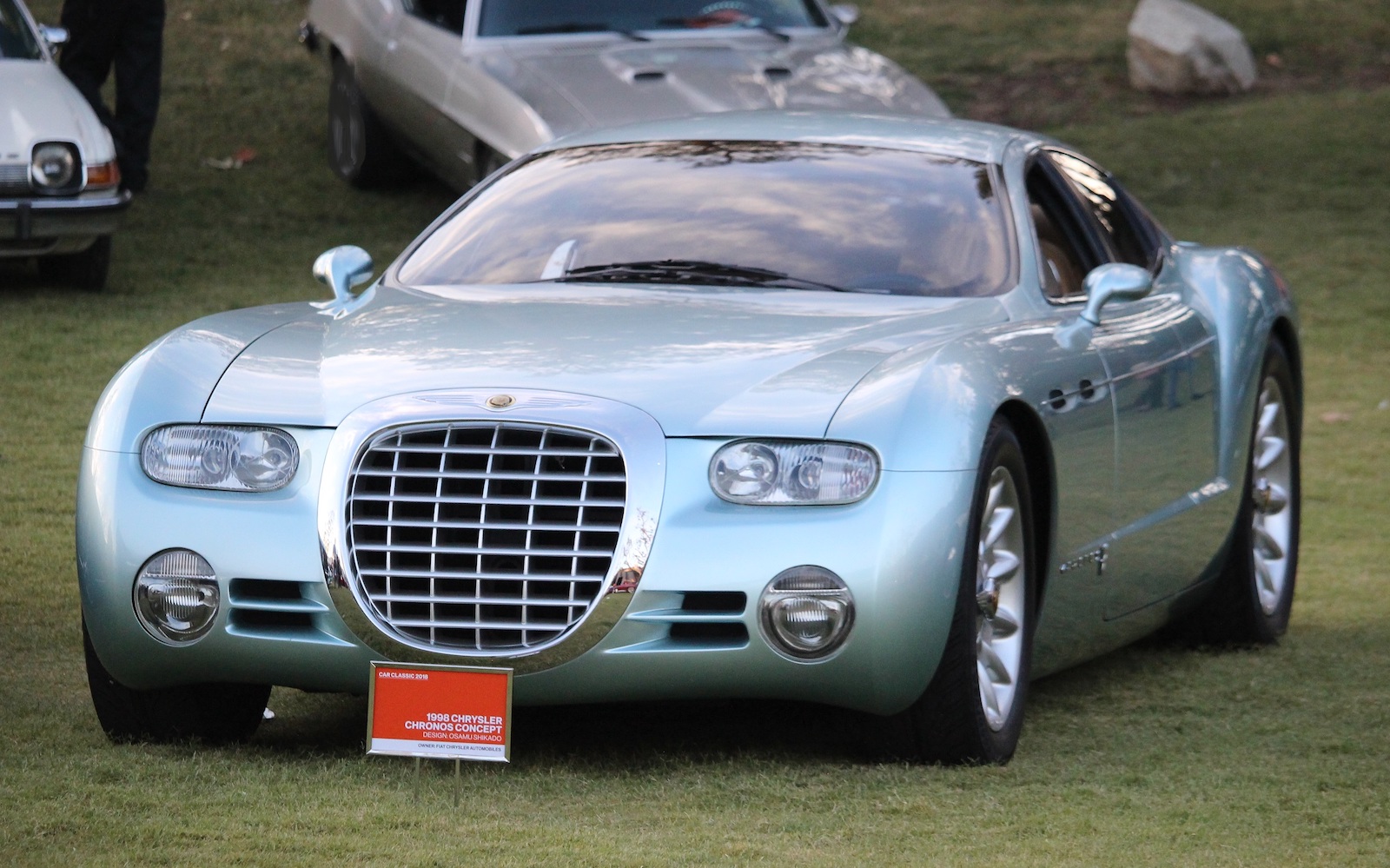 The ArtCenter College of design, situated high on a hill overlooking Pasadena, is famous for one thing: training a good proportion of the world’s car designers.

They have changed themes of their annual show (this year it was held on October 28) several times but this year (2018) it was most appropriate that they celebrated the achievements of the car designers who graduated from there by inviting them to come with a car they designed. Of course some of the companies are long gone, like Studebaker, but private owners entered cars to honor those designers.

In some respects the “old car show” was a bit like a new car show because there were several prototypes. But that just shows that Art Center grads are currently on the leading edge of the world’s car designers. The only beef I have is that the new wave of prototypes are electric cars, alas, what happened to heavy breathing rhumba-rhumba exhaust blaring performance? 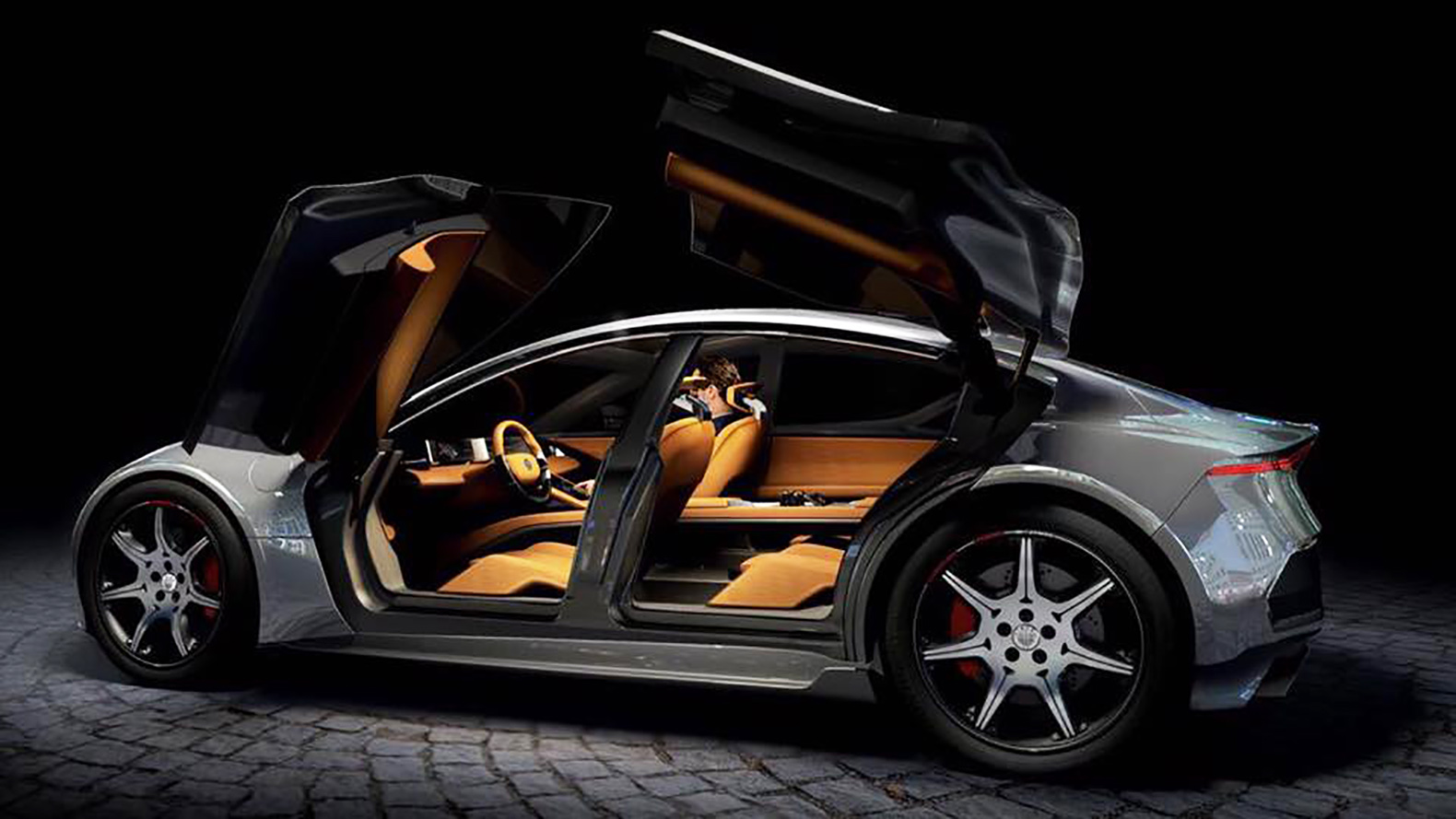 Among the new cars shown was Henrik Fisker’s E-Motion which Art Center described as an “all electric sports car” but I’m not stretching “sports car” to cover four door sedans. Still it is a good comeback for Fisker who first introduced the Karma, then lost that company only to come back with a new Fisker company. The new Fisker is unusual in that it has gullwing type doors in the rear and flip forward and up doors in the front.

Only a few feet away was the latest Tesla. Alas, no sign of Elon Musk, the wunderkind CEO, was seen but the designer was Franz von Holzhausen, who had the pleasure of having two other cars on display that he designed, the Solstice coupe (very rare fastback with removable roof) and a Solstice roadster.

One of the superstars there, by dint of all he has accomplished, was Peter Brock, once the wunderkind of Shelby American where he had started out as a race driving instructor, segued into designing T-shirts but then dashed off a design for a coupe that became the Cobra Daytona coupe, a car that won Shelby some championships until the Ford GT40 pushed it out of the limelight. He even drove a modern version of the Daytona coupe to the event. 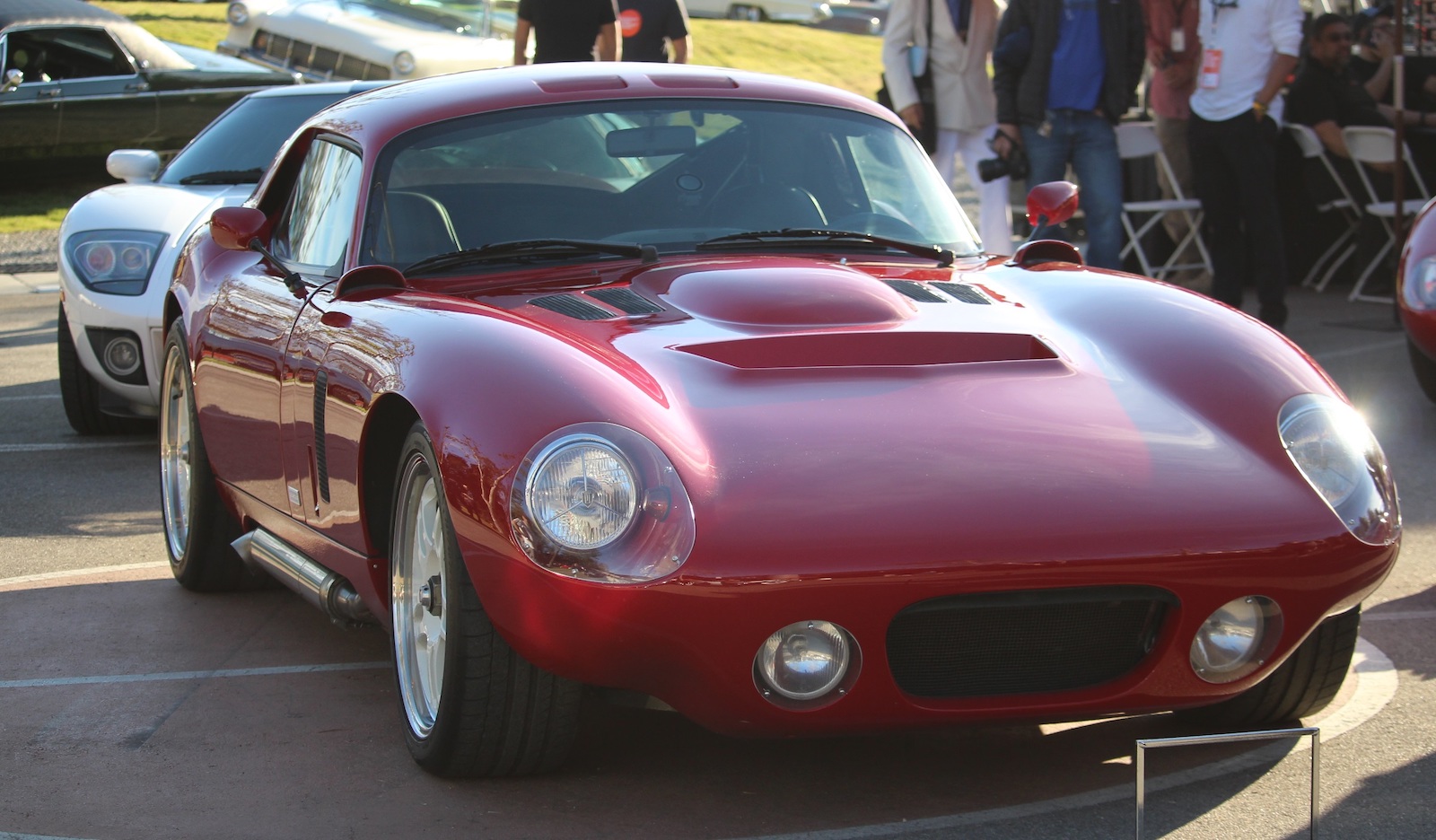 But the car he was displaying is the “star” of his new book, which he was introducing: the DeTomaso P70 car, which originally Shelby had commissioned with DeTomaso but then there was a falling out amongst the two automakers and Shelby bowed out so that DeTomaso introduced it as a Ghia prototype (DeTomaso owned Ghia).

Another very early graduate of the Art Center Transportation design program is Chuck Pelly, whose 1961 Holiday House Geographic Travel Trailer was on display.

Jumping to futuristic designs, there was the Daniel Simon designed Robocar for the Roborace Series. A car with an interesting story was the 1995 Chrysler Atlantic show car, which looked like a modern revival of a prewar Bugatti Type 57 Atlantic. Larry Crane, a docent at the Mullin Museum, explained that when executive Bob Lutz at Chrysler drew this on a napkin as a show car Chrysler should build, designer Bob Hubbach was able to do the car, which became a 1995 Chrysler Atlantic concept car. 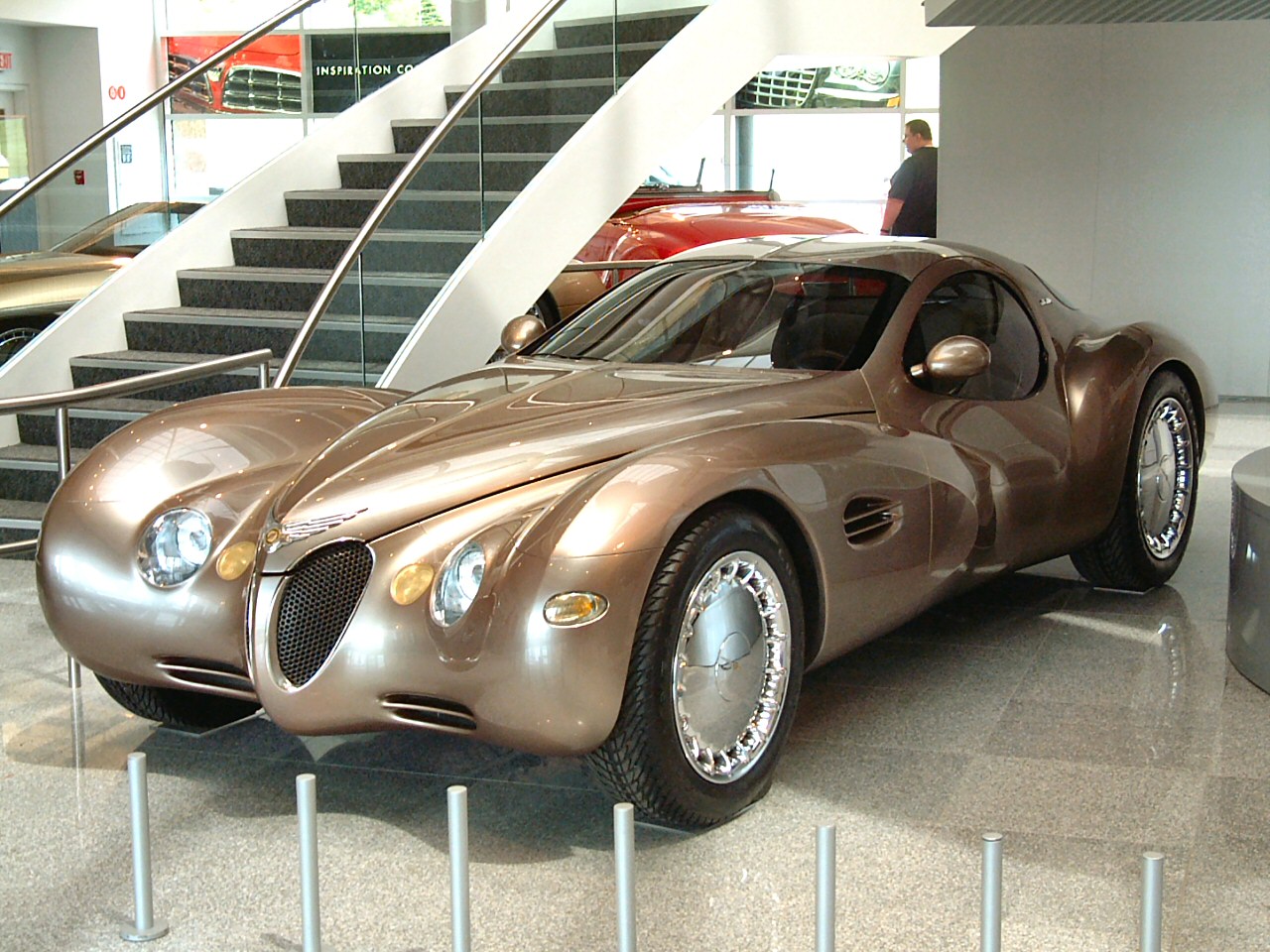 I don’t think the prewar Streamline Moderne influence on modern cars has ever been as strong in the modern day as in this car. Too bad it was only made to stand out at Pebble Beach.

Almost lost in the Atlantic’s glow was the Osamu Shikado designed 1998 Chrysler Chronos concept car which had a dashboard heavy on wood, the interior that should have been in the Atlantic if you ask me. 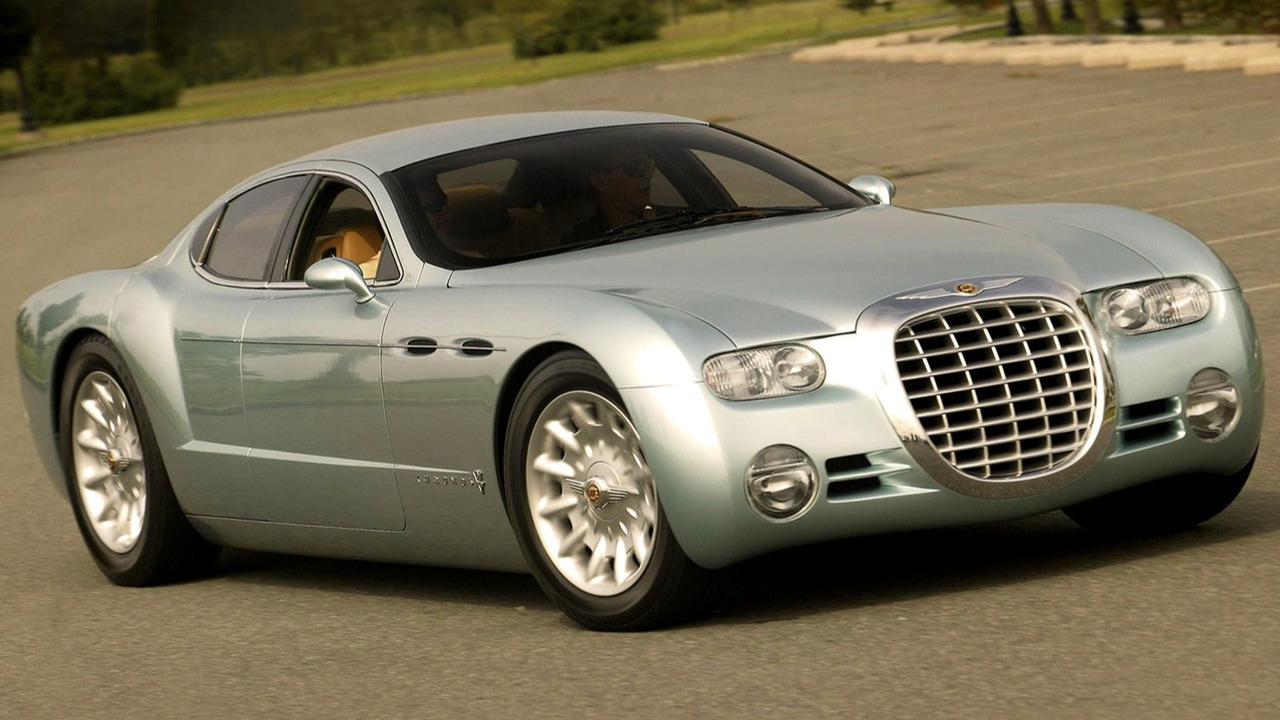 Another Art Center grad, Sasha Selipanov had a dream car on the field, one he designed with Chris Ha – the Genesis Essentia concept car.

Women designers weren’t left out, the Michelle Christensen-designed Acura NSX was being shown in its latest incarnation. Honda doesn’t sell many of these but is to be given credit for bringing a mid-engined sports car out ahead of the Corvette, which Chevy has been promising a mittlemotor for oh, 50 years. 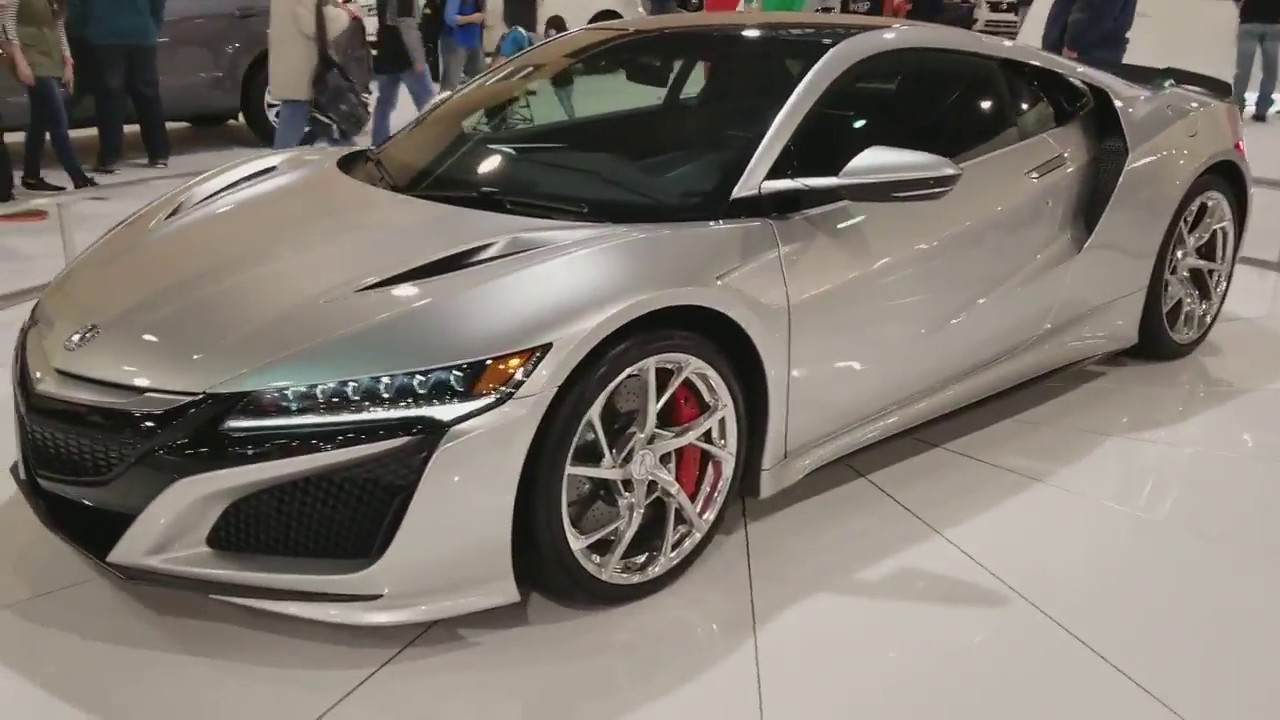 Another superstar designer is Freeman Thomas, who is now with Ford Advanced Design but who has been with VW (doing the present Beetle) and Porsche and Audi. So at Art Center he was represented by the car he designed with J Mays: the Audi TT.

In a touching scene (I am easily moved) I saw Thomas congratulating Brock for being a role model for car design students at Art Center for more than 50 years. I congratulated Brock too for always being accessible and granting me interviews in the past regarding his Shelby days.

The show is carefully curated to present design students the great designs of the past, among them a Lincoln Continental Convertible that looked about 50 feet long, and a Cadillac Eldorado Brougham with a brushed stainless (or is it aluminum?) roof. 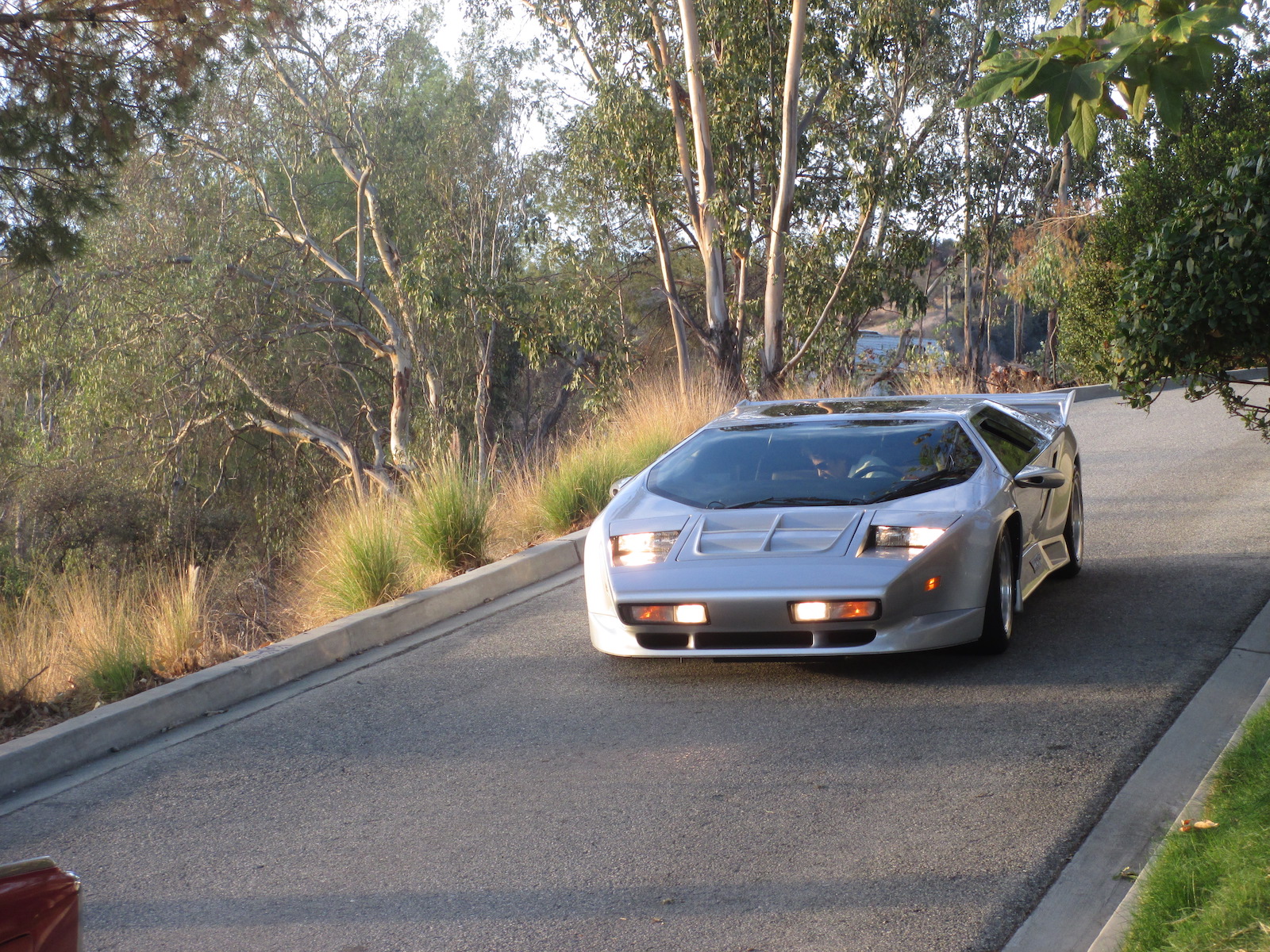 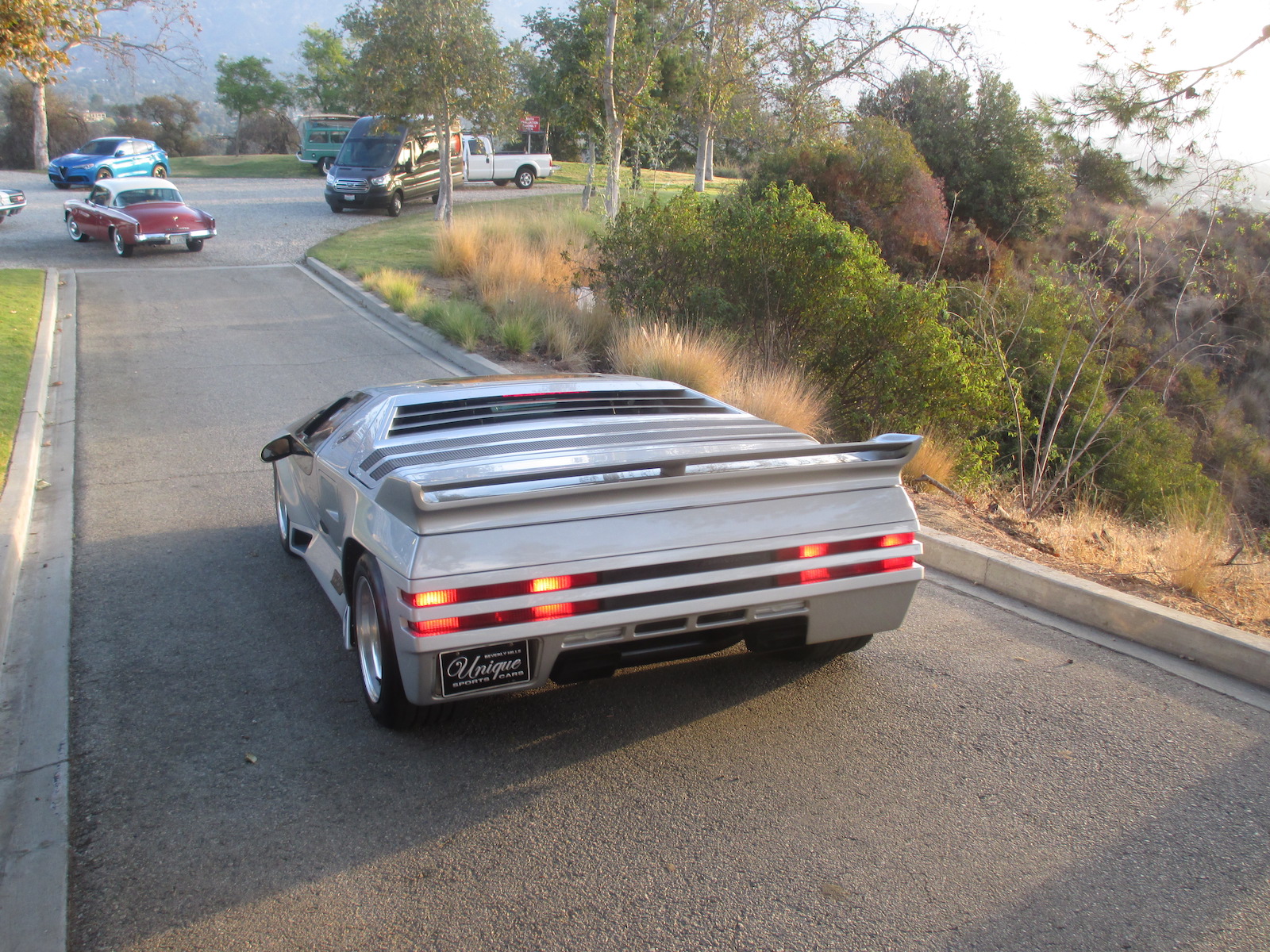 Many Art Center students today are Asian and never have seen these cars in person, so it’s a real education to walk around that show. This is the first year I’ve seen a whole group of students sketching the cars on display. By the way the beauty of this show is that you are free to walk around the campus interiors and see students at work making sketches, clay models etc. There is even a gallery showing illustration, fashion design, sculpture and the like.

Some of the cars shown, like an early Periscopio Countach, I couldn’t figure out how they fit in with the theme, but I was glad they were there.

There was one prewar French car, very elegant, though I had to read the PR story to realize it was there to represent a new Art Center feature, the Mullin Gallery in downtown Pasadena. The Gallery will feature automobiles from the Mullin Museum and display student work.

Jay Leno showed up with one of his 150-plus cars, an ancient Rolls Royce powered by a Merlin engine, similar to that used in both British and American fighter planes. It gets about 4 mpg.

The only inconvenient thing about this show is that spectators have to park down the hill at the Rose Bowl and be trammed up to the show. But otherwise, this was a great show in that you can talk to many of the designers or at least if the designer isn’t there, the car owner could usually fill you in on the designer’s history.

There was also some student artwork for sale. I like to see that the students can make a little money but most are too busy doing their homework to do art for sale.

Put it on your calendar next year—the Art Center Classic.

THE AUTHOR/ARTIST Wallace Wyss is a Southern California based fine artist who, on commission, paints oil portraits of significant cars. To discuss commissions, he can be reached at This email address is being protected from spambots. You need JavaScript enabled to view it..
Original article: http://mycarquest.com/2018/11/artcenter-college-of-design-car-classic-2018.html

We have 5662 visitors online