Ercole Spada (born July 26, 1937 in Busto Arsizio) is an Italian automobile designer. His most notable designs were produced in the 1960s, for the Zagato design studio house, where Spada was chief stylist. During this period some of the most notable sports cars by Aston Martin, Ferrari, Maserati, as well as Alfa Romeo, Abarth, Fiat and Lancia were clothed by Spada's designs.

Spada earned a degree in Industrial Engineering from Istituto tecnico Feltrinelli in 1956. Following a military service, Spada joined Zagato, in February 1960. The first design created by Spada for Zagato was the Aston Martin DB4 GT Zagato. Many avantgarde yet instantly-classic designs were to follow, soon becoming cornerstones of automotive design. Spada's designs were acknowledged as seminal by his fellow designers as well as by generetions of new designers; One example of the attraction of Spada's work was that of the Mazda MX-3, which aimed to capture the magic of the Alfa Romeo Giulia TZ design, according to its creators. Shortly before leaving Zagato, Spada designed one of the most modern looking cars of the era, the Alfa Romeo Junior Z, as well as the popular and dramatic Lancia Fulvia Sport. Spada joined Ford in 1970 to become chief designer at the Italian Ghia design house. This led to the creation of the ill-fated Ford GT70, which did not enter production at the last moment. 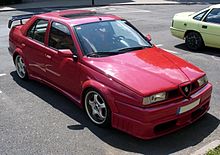 After leaving Ford and following a short stay in Audi, Spada joined BMW design center as chief stylist in 1976. During his stay with BMW, Spada created two major all-new designs with Claus Luthe, the BMW E32 7-series (1986–1994), and the BMW E34 5-series (1988–1996). Both embraced similar classic yet progressive lines, contributing to the success of the German company.

In 1983 Spada returned to lead an Italian design house, this time I.DE.A Institute, where he designed a string of compact and luxury cars, for Fiat – the groundbreaking Tipo and Tempra siblings, the Lancia Dedra and Delta II as well as the Kappa. Other projects included the Alfa Romeo 155 and the Daihatsu Move. During his stay in I.DE.A Institute, Spada had competed and won over major design contracts from Fiat, putting him in direct competition with his fellow Italian designer, Giorgetto Giugiaro.

Returning to Zagato in 1992, Spada brought with him new creative energy, which led to the introduction of the Ferrari FZ93, based on a regular 512 TR mechanics, as well as other notabe designs.

Currently, Spada continues to work as a designer. He has joined his son, Paulo Spada, to create Spadaconcept, a new design house aimed at automotive and industrial design.

In 2015 they created (after 55 years) the Aston Martin DB4 GTZ Spada Roadster.