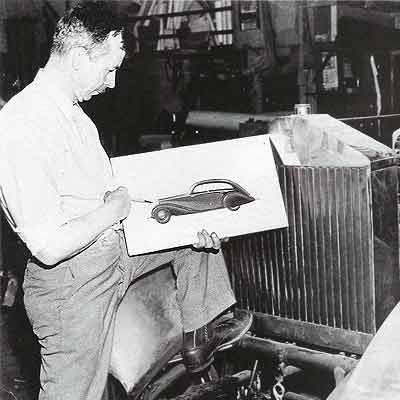 Maurice Schwartz (1884-1961) was born in Austria in 1884 and learned the art of body building at the Armbruster Kaiser Koneg Hofwagen Fabrick, the Vienna firm that built carriages for the Kaiser. In 1904 Armbruster added automobile bodies to their product catalog and Schwartz had six years experience in building them when he was recruited by the Springfield Metal body company in 1910 to come to the United States to work in their busy plant in Springfield, Massachusetts. In the next few years, Schwartz went on to work for Willoughby in Utica, New York and for the Fisher Brothers in Detroit. In 1918 he came to Los Angeles, California to work for the Earl Auto Works. His boss for a while was Harley Earl, who later gained fame as the father of “factory styling” at General Motors' Art & Colour section. In 1920 Schwartz built a custom Essex touring car for himself that featured an unusual custom radiator shell that also housed the cars headlights. Also included on his personal driver were sheet-metal aprons - front & rear - and a custom body with a fixed California-style top with removable windows. He was adept in many of the old-world skills such as wood-working, pattern-making, and brass and aluminum casting. Schwartz tolerated nothing but the best in anything that he did. He wasted no time on idle talk and put in an exact day's work. Yet he was also a warm and kind person who loved and told splendid jokes.

The Earl Automobile Works was absorbed into the pre-existing Don Lee Coach & Body Works in 1919. Don Lee had been selling Cadillacs since 1906 and became Cadillac's official West Coast distributor in 1919. Schwartz stayed with the Don Lee organization for several years where he was engaged in building Harley J. Earl's creations before he moved to Murphy in 1924.

Unfortunately the ultraconservative styling and paintwork of the Lincolns kept Los Angeles’ wealthy movie industry stars and executives out of Murphy’s Lincoln showroom. Aware of the success that Don Lee had with Cadillacs and custom bodies he purchased Healey & Company of Keyport, N.J. from Colonel Healey in 1921 and moved it to Pasadena lock stock and barrel. George A. Fredericks, Walter Murphy’s shop manager, induced Bohman and several other skilled Healey craftsmen to move to California as well.

Shortly thereafter every Lincoln offered by Murphy was first routed through his body plant, where the top was lowered some six to seven inches and repainted in more saleable colors.

Bohman left Murphy in 1930 to establish his own shop, but faltered and joined forces with his friend Maurice Schwartz when Murphy closed in April, 1932. Together they purchased some of Murphy’s shop equipment at auction and arranged to take over some unfinished Murphy contracts from their new headquarters, which was located in the back of Prosser's Garage at the intersection of Delacey and Green Streets in Pasadena, California.

We have 6902 visitors online