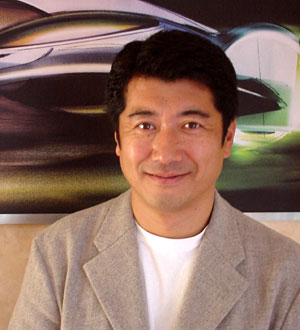 Ken Okuyama (born 1959) is a Japanese industrial designer and owner of the Ken Okuyama Design company. Okuyama formerly worked for Pininfarina designing and supervising projects such as the Enzo Ferrari and Ferrari P4/5. His given name is Kiyoyuki Okuyama but goes by Ken Okuyama outside Japan. He was born in the city of Yamagata, Japan, but lives in Italy, and speaks Japanese, Italian, and English fluently.

On 10 May 2004, Ken Okuyama began work as Creative Director at Pininfarina. He had been working with Pininfarina before, supervising the design of the Enzo Ferrari. As Creative Director Ken oversaw projects including the Ferrari 599, Mitsubishi Colt CZC, Maserati Birdcage 75th and Ferrari P4/5.

In 2006, Okuyama left Pininfarina and set up his own design firm, Newton Design Lab. In late 2007, Okuyama launched the Ken Okuyama Eyes collection, an eyewear collection manufactured in Japan.

In 2008, Ken Okuyama presented his first concept car under his own name - the K.O. 7 Spider, a carbon fiber and unpainted aluminum two-seater. The K.O. 7 was unveiled at the Geneva Motor Show in March 2008. Ken Okuyama has cooperated with the luxury watch producer TAG Heuer, having fitted the TAG Heuer Grand Carrera at the dashboard of the car. The interior of the concept car was inspired by the design of the TAG Heuer watch.

In 2016 he launched the Kode 57 Kenji at The Quail. This car was based on the 2000 Pininfarina Ferrari Rossa concept car.

In 2017 he launched the Kode 0 at Pebble Beach. This model is based on the Lamborghini Aventador.

We have 7332 visitors online