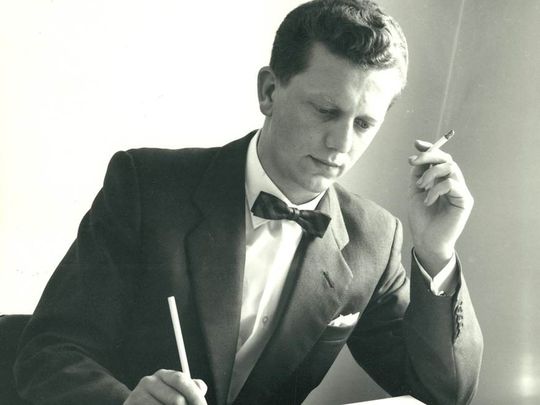 Colin Neale, a designer of British and American cars, wasn’t exactly famous – but you could find his designs all over American autos for decades going back to the late 1950s.

His expertise helped shape the looks of the first Lincoln Continental, countless cars by Chrysler, and he was envisioning sporty concept cars right before the first Ford Mustang.

“He left his mark on so many cars that it’s hard to name them all,” his son, John Neale, who now lives in Boston, said by phone on Tuesday. “He really was from that golden age of Detroit design.”

Neale was born in England in 1926, and came from a design-minded family – his father worked on parts for bomber planes, and his older brother, Eric Neale, also became a car designer in England. During World War II, he trained as a pilot for the Royal Air Force, but the war ended before his training was done.

In the ensuing years, he went back to school, worked as a designer for tools and machines and eventually started working for Ford in England. Though only in his 20s, he left a mark on a wide range of cars that were some of the most American-looking on the U.K. market at the time, said Stephen Wickham, who is based on Bristol, England, and is the editor of the car enthusiast magazine, Classic Capri Review.

There was the Ford Consul Capri – a rounded car with fins at the back that was so well-liked by Henry Ford II that he gave an early prototype to his daughter, Charlotte, while she was studying in Paris, John Neale said. The car, and others like it – the Ford Consul Classic, for example – gave British car buyers “access to that American Dream over here, but in a package they could ... afford to run,” Wickham said.

And there was the Ford Anglia, which was cheap, driven fast and exported all over the world. The car made an appearance decades later as a flying car in an early Harry Potter movie, John Neale said.

“He was a young big fish in a small pond,” Wickham said of Neale’s time as a designer in England. In fact, his influence was so great that by a decade or so after he started designing for Ford, “the streets of England were looking like they were full of his stuff.”

In the late 1950s, Neale moved from England to Dearborn while still working for Ford, and it was there that his stylistic choices left an impression on a series of well-known cars. He designed the rear end of the 1961 Lincoln Continental, which would become well-known in popular culture through the ensuing decades. (In just one example, John F. Kennedy was riding in a modified version of a Lincoln Continental when he was assassinated.)

Neale’s approach to design was focused on beauty but also function. He had little interest in large tail fins, which he felt accomplished nothing.

Yet he also took part in some pioneering experiments. His design work was instrumental to the Firefly in 1961, an all-electric concept car. According to Wickham and John Neale, it was a spark of an idea from around this time that caused the auto executive Lee Iacocca to dust off earlier plans for a sportier-looking car, which eventually became the first Mustang.

That same year, Neale left Ford to join Chrysler, where he eventually oversaw the interior car designs for the entire company. He was part of some radical experiments, which today seem not so radical after all. One concept car, the Chrysler 300X in 1966, featured retractable seat belts, a steering wheel that could collapse during impact, a television for the rear passengers and a plastic card that could start the car, John Neale said. The car was shown at auto shows for three years and then scrapped.

“It was a really, really creative time,” John Neale said. “They were all trying to imagine a future faster than the technology was allowing them to produce it.”

Colin Neale left Chrysler in 1977, but he kept working as a designer well into his later years. He retired in 2006 at the age of 80, yet his last patent arrived at the age of 84. He was thrilled and inspired by the emergence of Tesla, and not long before his death he had been trying to sell the company one of his patents.

“He never really stopped drawing or designing,” John Neale said. “It was an addiction. He saw the world through that lens.”

Neale’s designs will appear in one form or another during the Dream Cruise. He was a fan of the event, and in past years he or a family member would show up to the event with a 1961 Ford Consul Capri, a prized relic from his days at Ford in England.

The car is so scarce in the U.S. that “it just confounds people,” John Neale laughed. “Everyone thinks they’re a car expert and this is the car that stumps everybody.”

We have 7402 visitors online