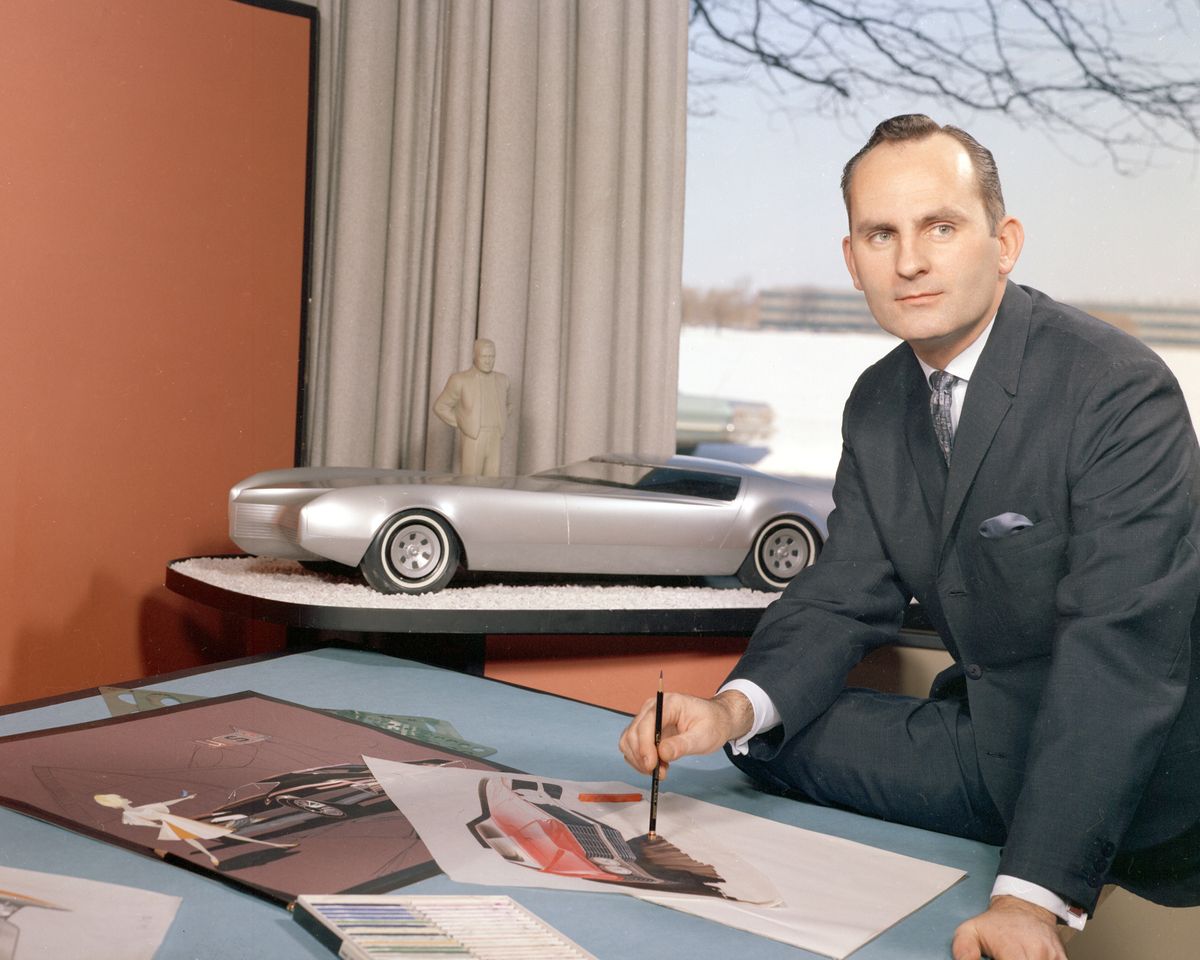 "The best design is the least design,” at least according to iconic German industrial designer Dieter Rams. Such advice fell on deaf ears in mid-twentieth-century Detroit, where a baroque and fanciful approach ruled to create some of history’s most beloved cars.

General Motors’ wildly creative mid-century offerings succeeded in large part due to the company’s design vice presidents. Harley Earl, who served from 1928-58, is most well known, but his successors deserve notice, too.

Chuck Jordan served as the last of General Motors’ jet-age Michelangelos who sculpted steel and glass into road rockets well suited for a soaring, optimistic age. Americans demanded nothing less for their drive into what appeared to be an unlimited future.

During childhood, Chuck Jordan lived to draw cars. His grandmother snuck him paper so he could draw on his hymnal during Sunday services. Encouraged by his mother to enter GM's famed Fisher Body Craftsmen's Guild competition, Jordan spent 700 hours building a model that won him $4,000 and a ticket to Detroit - a trip that lead to his hiring by GM.

Jordan started off with a bang when Earl assigned him to design a Motorama dream (now called “concept”) car. His dramatic 1956 Buick Centurion, with its sweeping lines, bat fins, and bubble top, also featured the world's first back-up camera with in-dash monitor.

Harley Earl’s prime directive to stylists was to “go all the way, then back off” when developing new designs. Chuck Jordan was keen to go all the way, but showed less interest in the “backing off” part. This bravura showed in his baroque 1959 Cadillac.

It was, without a doubt, the most outlandish mass produced car ever built. With shark fins soaring nearly as high as its roof, rocket-pod tail lamps, and matching front and rear grilles glittering with more detailed intricacy than a federal health care bill, it was the absolute peak of space age style. Cadillac’s 1959 design was so over the top that GM immediately backed off, offering a toned-down 1960 model and gradually shaving fins down until they disappeared altogether.

Jordan’s 1958 Corvette was that brand’s most chrome-bedecked and gaudiest ever built. Though initially derided by Corvette fans, it has grown in stature to the point that it’s become one of collectors’ most sought after model years. He topped that with his wild XP-700 Corvette, a concept styled under the supervision of Earl's successor Bill Mitchell.

As Earl’s immediate successor, Bill Mitchell had introduced a clean, sculptured look to replace Earl’s busy, chrome-bedecked creations. Jordan followed Mitchell and served as vice president of design from 1977-92, a period when governmental regulations, safety, and efficiency concerns ruled designers with a heavy hand. His designs include the 1988 Buick Reatta, ’91 Chevrolet Caprice, and ’92 Cadillac Seville.

Jordan retired and taught auto design to high school students, saying, "Promoting their creativity and exposing them to the opportunity design offers is very satisfying."

We're not likely to see the reemergence of designers like Chuck Jordan in today’s highly technical and heavily regulated auto industry. Today nearly all the world’s designers attend the same schools and move around, chasing design jobs from company to company and country to country until they’re producing indistinguishable, generic looks. Efficient as they are, today’s aerodynamic fuel sippers struggle to offer even a modicum of the romance and drama that mid-century designers like Chuck Jordan seemed to toss off routinely.

We have 8527 visitors online