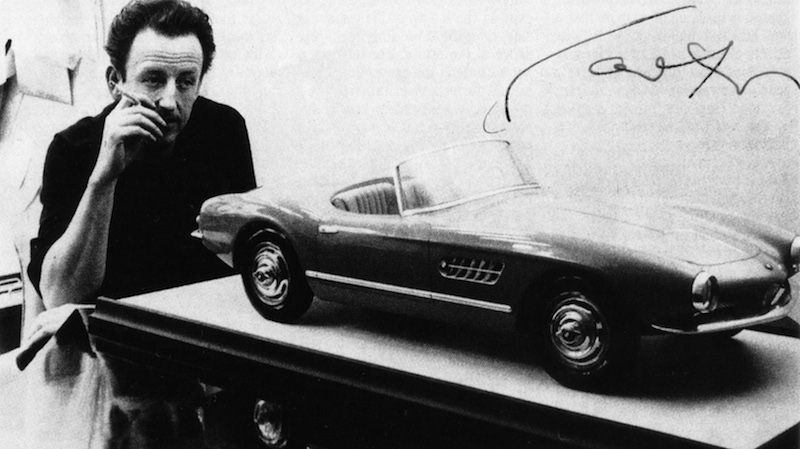 Count Albrecht von Goertz, widely known as Albrecht Goertz was a German industrial designer who designed cars for BMW including the BMW 503 and BMW 507.

He was born in Brunkensen in Lower Saxony, the second of three children Rudolf Graf von Schlitz gen. von Goertz und Freiherr von Wrisberg (1884–1933) and of Else Meyer (1882–1968). However, his elder brother Eberhard died, and while Albrecht did not technically inherit the honorific, he began to call himself "The Count," and is often referred to that way.

After attending school, Goertz was apprenticed to Deutsche Bank in Hamburg and then in London at a private bank, Helbert Wagg & Co, but his prospects were not good, so in 1936 he emigrated to the United States of America. He eventually moved to Los Angeles and worked at a car wash and in a factory making aircraft engines. In 1938 Goertz rented a garage and showroom and modified Ford Model A and B models. On a Mercury chassis, he built a two-door coupe called the "Paragon". This was exhibited at the World Exhibition in New York in 1939.

Goertz joined the US Army in 1940 and served for five years. After leaving the Army he drove the Paragon to New York and while driving it he accidentally encountered Raymond Loewy, the famous car designer. Loewy invited Goertz to his office, sent him to college to learn about design and later gave him a job in the Studebaker studio in Indiana.

Goertz in 1953 set up his own design business and got to know Max Hoffman, BMW's main importer in America. Hoffman knew of BMW's plans to build a sports car and suggested that Goertz should contact BMW in Munich. Goertz then designed both the BMW 503 and the BMW 507, both of 1955.

Goertz claimed that he worked for Porsche, although this 'work' seems to have been an unsolicited 'design' submission for the 901, which was rejected. However he was employed as a consultant to Nissan - visiting the factory intermittently over a limited period, mainly to instruct in full-size clay modelling. He also carried out consultation work on a two-seater sports car project for Nissan. The prototype was called the Datsun Coupe 1500 (later officially debut as the Nissan Silvia CSP311). Goertz then worked on another prototype, the Nissan 2000GT, in collaboration with Yamaha. When Nissan abandoned the project, Yamaha approached Toyota - using the Nissan 2000GT prototype as an example of their work. Toyota then worked with Yamaha on what became the Toyota 2000GT(note the design of the Toyota 2000GT was different from the Nissan version and it was made by Toyota designer Satoru Nozaki). His last design was a grand piano for Steinway & Sons to celebrate the 125th anniversary of their Hamburg factory.

After BMW, Goertz worked for a number of other car makers, including Porsche, Toyota & Nissan, although it’s difficult to pinpoint exactly what specific levels of involvement Goertz had, with with a lot of patchy sources and conflicting information clouding the facts.

People often believe Goertz was solely responsible for designing both the 2000GT and the 240Z because it’s been widely reported in the press as fact, with multiple publications citing Goertz as the "Father of the Z Car”. While most evidence suggests that he wasn’t solely responsible, he most likely had a strong influence on the design team. The issue came to a head in the 1980's with Nissan releasing this statement about Goertz's involvement with Nissan:

A Correspondence Between Toshikuni Nyui of Nissan and Albrecht Goertz:

At your request, we have examined the relevant evidence pertaining to the development of the highly successful Datsun 240Z which was first introduced in 1969.
You were retained by Nissan during the period from 1963 to 1965 as an automotive design consultant. During that period, you consulted with Nissan on the basic methods of styling a general sports car. You were also the sole design consultant on a two-liter sports car which Nissan was trying to develop as part of a joint venture with Yamaha. This car was not produced.
While it is our view that the design of the 240Z was the product of Nissan's design staff, Nissan agrees that the personnel who designed that automobile were influenced by your fine work for Nissan and had the benefit of your designs.

We have 7055 visitors online