Marcello Gandini (born 26 August 1938) is an Italian car designer, known for his work with the automotive design house Gruppo Bertone, including his design of the Lamborghini Countach. Gandini belongs to a triumvirate, along with Giorgetto Giugiaro and Leonardo Fioravanti, of noted Italian car designers, all born in 1938, within months of each other.

In a 2009 interview with Robert Cumberford, editor at Automobile Magazine, Gandini indicated "his design interests are focused on vehicle architecture, construction, assembly, and mechanisms - not appearance."
Gandini was one of twenty-five designers nominated for Car Designer of the Century. 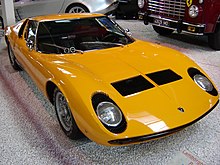 The son of an orchestra conductor, Gandini was born in Turin.

In 1963, he approached Nuccio Bertone, head of the Gruppo Bertone company, however Giorgetto Giugiaro, then Bertone's chief designer, opposed his being hired. When Giugiaro left Bertone two years later, Gandini was hired, and worked for the company for fourteen years.

Creator of Stile Bertone in Caprie, Gandini served as general manager of the styling house, designing show cars as well as managing the construction of prototype automobiles.

Gandini designed Lamborghini's Miura and Countach and many practical cars as well, including the Citroën BX, the first-generation BMW 5-series, the Innocenti Mini, and the Renault Supercinq. He introduced the concept of scissor doors with the Alfa Romeo 33 Carabo prototype, while the Lancia Stratos supercar was another Gandini design.

Gandini has worked in other areas, including home architecture, the design of a nightclub interior, and the body styling of the Heli-Sport CH-7 helicopter.