Virgil Max "Ex" Exner, Sr. was an automobile designer for numerous American companies, notably Chrysler and Studebaker. He is known for his "Forward Look" design on the 1955-1963 Chrysler products and his fondness of fins on cars for both aesthetic and aerodynamic reasons.

Born in Ann Arbor, Michigan, Virgil Exner was adopted by George W. and Iva Exner as a baby. Virgil showed a strong interest in art and automobiles. He went to Buchanan High School in Buchanan, Michigan then studied art at the University of Notre Dame in Indiana but, in 1928, dropped out after two years due to lack of funds. He then took a job as a helper at an art studio specializing in advertising. In 1931 he married Mildred Marie Eshleman, who also worked for the studio and, on April 17, 1933, they had their first child, Virgil Exner Jr. By that time, Exner Sr. had been promoted to drawing advertisements for Studebaker trucks. They had a second son in 1940, Brian, who died of injuries after falling from a window.

His first work in design was for General Motors, where he was hired by GM styling czar Harley Earl. Before age 30, he was in charge of Pontiac styling.

In 1938, he joined Raymond Loewy's industrial design firm Loewy and Associates, where he worked on World War II military vehicles and cars, notably Studebaker's 1939-40 models, and advance plans for their revolutionary post-war cars. "But working on Studebaker designs… Exner struggled to get the attention of his boss, who had to sign off on every facet of the designs. Exner was encouraged by Roy Cole, Studebaker’s engineering vice president, to work on his own at home on backup designs in case the company’s touchy relationship with Loewy blew up".

In 1944, he was fired by Loewy and was hired directly by Studebaker in South Bend, Indiana. There he was involved in the design of some of the first cars to be produced after World War II (Studebaker's slogan during this period was "First by far with a post war car"). As acknowledged by Robert Bourke, Virgil was the final designer of the acclaimed 1947 Studebaker Starlight coupe, though Raymond Loewy received the public acknowledgment because his legendary name was a major advertising attraction. Exner is actually listed as sole inventor on the design patent. Rivalry and bad feeling between the two resulted in Exner having to leave Studebaker, whose engineering chief Roy Cole provided personal introductions for him to Ford and Chrysler.

In 1949, Exner started working in Chrysler's Advanced Styling Group, where he partnered with Cliff Voss and Maury Baldwin. There he also worked with Luigi "Gigi" Segre, of Italian car company Carrozzeria Ghia S.p.A. The men created a strong personal bond, which helped link the companies closely throughout the 1950s. The alliance produced the Chrysler Ghia designs, such as the 1952 Chrysler K-310, the mid-1950s Dodge Firearrow series show cars, as well as the Chrysler d'Elegance and DeSoto Adventurer.

When Exner joined Chrysler, the car's body was fashioned by engineers instead of designers — leading to what many thought were old-fashioned, boxy designs on Chryslers of the 1940s and early 50s. Exner fought to change this structuring, and got control over the design process, including the clay prototypes and the die models used to create production tooling. Here he created the Dodge Firearrow concept, constructed by Ghia. 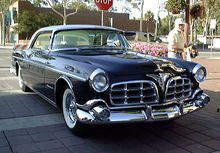 The 1955 Imperial, one of the first Exner-styled Chrysler vehicles

Inspired by the Lockheed P-38 Lightning, GM's Harley Earl incorporated small "fins" on the rear fenders of the 1948 Cadillac models. Exner saw the design detail (also being experimented with by some Italian manufacturers) and made it his own by enlarging the fins and making them a more prominent feature. Exner believed in the aerodynamic benefits of the fins and even used wind tunnel testing at the University of Michigan — but he also liked their visual effects on the car. They were showcased on the first cars designed under his full supervision for sale: the 1955 Chrysler 300 series, and the Imperial. The hardtop versions of 1957 Chrysler Corporation cars also featured compound curved glass, the first to be used in a production car.

These fin designs also premiered his "Forward Look." In the late 1940s, Chrysler had been behind the times in terms of styling with what were considered tall, boxy cars. Exner lowered the roofline and made the cars sleeker, smoother and more aggressive. With a long hood and short deck, the wedgelike designs of the 300 series and revised 1957 models suddenly brought Chrysler to the forefront of design, with Ford and General Motors quickly working to catch up. Advertising campaigns for the 1957 model year sang that "Suddenly, it's 1960!" In June of that year Exner and his team were awarded the Industrial Designers' Institute's Gold Medal Award.

In 1956, during the design of the 1961 models, Exner suffered a heart attack. He resumed work in 1957, working on the designs for the 1962 cars. On July 25, 1957, Exner was elected the first Vice President of Styling at Chrysler. Unfortunately, a rumor that GM was reducing the size of their cars caused the President of Chrysler, Lester Lum ("Tex") Colbert, to order Exner to do the same to his 1962 design — a change Exner disagreed with, thinking it would make his cars "ugly." Exner with his associates had completed work on the second full-sized finless Plymouth since 1955, this one for 1962, described as a strikingly attractive automobile. While he was still recovering from the heart attack, the 1962 models Exner took credit for were downsized by associates. This downsizing drastically changed the cars' appearance. This reduced the cars' appeal and caused a significant drop in sales. It turned out that the Chevrolet rumor was false and consumers disliked the smaller Plymouth and Dodge cars introduced for 1962, the styling of which was bizarre compared to more sedate Ford and GM products. Needing a scapegoat, Chrysler fired Exner. He was allowed to retain a position as a consultant so he could retire with pension at age 55. He was replaced by Elwood Engel, who had been lured from Ford. Engel was highly regarded for his design of the classic 1961 Lincoln Continental.

Fins soon lost popularity. By the late 1950s, Cadillac and Chrysler - driven by the respective competing visions of GM's Earl and Chrysler's Exner - had escalated the size of fins till some thought they were stylistically questionable and they became a symbol of American excess in the early '60s. The 1961 models are considered the last of the "Forward Look" designs; Exner later referred to the finless 1962 down-sized Plymouth and Dodge models as "plucked chickens". Although fins were out of favor by the early 1960s, fins could still give aerodynamic advantages. In the early 1970s Porsche 917 racing automobiles sported fins reminiscent of Exner's designs.

Exner continued consulting for many car companies from his office in Birmingham, Michigan. He also teamed up with his son, Virgil Exner Jr., designing watercraft for Buehler Corporation. In 1963, he designed a series of "Revival Cars" with production plans. His revival of Duesenberg failed, but he was instrumental in the revival of Stutz in the 1970s.

He died of heart failure on December 22, 1973 at the William Beaumont Hospital in Royal Oak, Michigan.