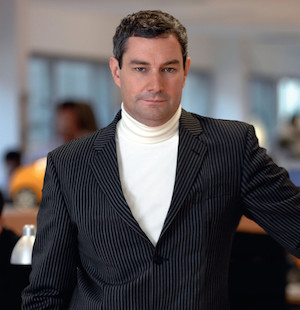 Luc Donckerwolke, (born June 19, 1965) is a Belgian car designer for Hyundai's Genesis luxury brand and former Design Director of Volkswagen Group's Bentley, Lamborghini and Audi. In November 2015, he was appointed to lead Hyundai Motor Group's Genesis luxury brand from 2016 and will work together with Hyundai-Kia's chief designer Peter Schreyer.

Donckerwolke was born in Lima, Peru, and educated in various South American and African countries before studying industrial engineering in Brussels and transportation design in Vevey, Switzerland.

He has a residence in Peru and another in Brussels. His hobbies include motor racing, old cars, foreign cultures and learning languages. He speaks Dutch, Italian, French, Spanish, English, German, Korean, Mandarin, Japanese and Swahili.

Donckerwolke began his design career in 1990 with Peugeot in France. In 1992 he moved to Ingolstadt for a 2-year stint at Audi Design. He spent 1994 to 1996 working at the Škoda Design Center Mlada Boleslav in the Czech Republic, where he contributed to the 1996 Škoda Octavia and 1999 Škoda Fabia.

After Škoda he returned to Audi responsible for concept development, operating out of Ingolstadt for one year and Munich for another. It was during this time he worked on the Audi A4 Avant and the Audi R8 Le Mans Racer. During his time at Audi, Donckerwolke was also responsible for designing the Audi A2 concept and production car which was known at the time for being innovative and ahead of its time like most of his designs.

He was head of design at Lamborghini from 1998, where he was responsible for the 2001 Lamborghini Diablo VT 6.0, 2002 Lamborghini Murciélago and 2004 Lamborghini Gallardo, winning the 'Red Dot Award' in 2003 in recognition for his work on them. He also worked with Walter de'Silva to produce the 2006 Lamborghini Miura concept.

In September 2005, Donckerwolke was appointed SEAT Design Director overseeing the design of future SEAT models, replacing Walter de'Silva who was promoted to oversee design for the entire Audi Brand Group. He is tasked with progressing SEAT design from Walter de'Silva's directorship to a look that will bring increased brand awareness and sales to the marque. His first visible contribution to SEAT is the SEAT Tribu concept, unveiled at the 2007 Frankfurt Motor Show.

In September 2012, Donckerwolke was appointed Bentley Director of Design, overseeing the design of future Bentley models, replacing Dirk van Braeckel who moved to Volkswagen Group design. In June 2015 Bentley announced Stefan Sielaff as his successor: "Mr Sielaff replaces Mr Donckerwolke who has decided to leave the business and Volkswagen AG".