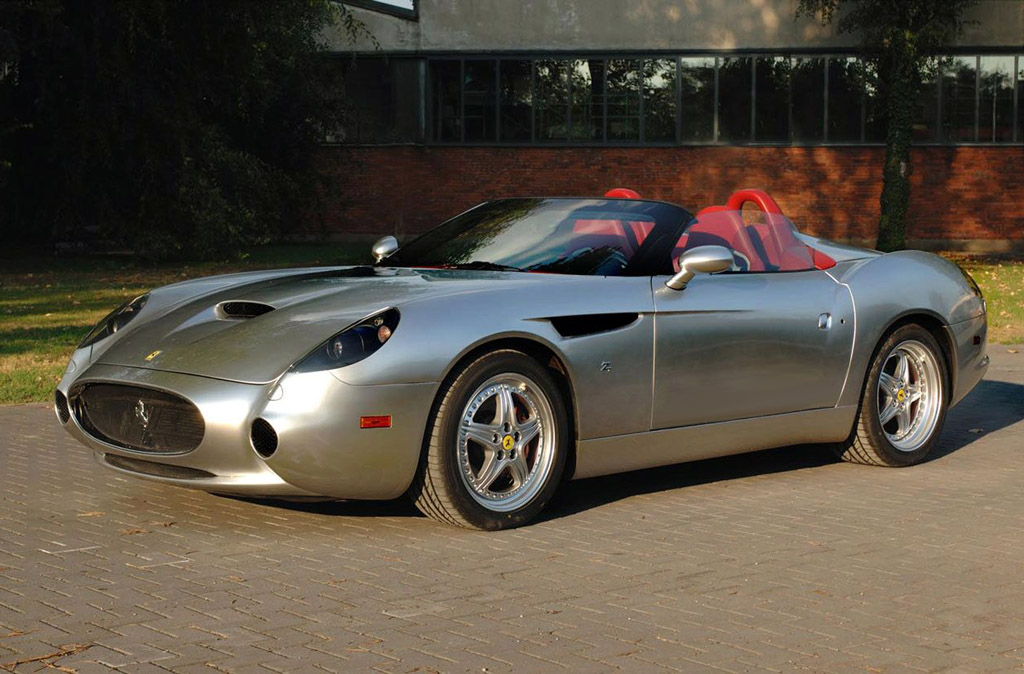 The recent completion of the three Ferrari 550 GTZ Barchetta Zagato sports cars bodied by Carrozzeria Zagato has successfully concluded the so-called 'Zero Project', which had commenced in 2005 with the re-bodying of six Ferrari 575 GTs. These nine very special 'Zero Project' cars have now been delivered to their selected private owners around the world and Bonhams is privileged to offer for sale here the last one completed.

One of the oldest and most respected of automotive design firms, Zagato was founded in Milan in 1919 by Ugo Zagato, who used techniques learned in the wartime aeronautics industry to create a series of lightweight competition cars. Abandoning the traditional timber-framed construction of his Italian contemporaries, Zagato used a steel framework for his bodies, which were panelled in aluminium. Alfa Romeo immediately realised the potential of Zagato's designs, and thus commenced a fruitful collaboration that lasts to this day. Legendary racing models such as Alfa's 1500, 1750 Gran Sport and 2300 8C were followed by luxurious coupés and roadsters on FIAT and Lancia chassis, many of which reflected Zagato's expertise in the field of vehicle aerodynamics.

Zagato's original factory was destroyed in an air raid on Milan in August 1943 and at the war's end new premises were found close to the Alfa Romeo factory in the Portello district of the city. Once production had recommenced, Zagato was quick to exploit the popularity of the new GT racing category, supplying factory teams and catering for the growing privateer scene with roadable cars that nevertheless could be driven competitively on the racetrack come the weekend. Zagato's own history records that, 'avante garde styling, together with light weight and wind-cheating lines were a trademark that distinguished Zagato's cars of that era - Maserati, Alfa Romeo, FIAT, Lancia, Abarth, Ferrari and Aston Martin. In addition to limited series produced officially, the company also built exclusive one-offs and prototypes for other illustrious marques such as Ford, Jaguar, MG, Rover, Volvo, Bristol and Rolls-Royce.'

The 'Zero Project' was instigated when Zagato received a request from Yoshiyuki Hayashi, the famous Japanese collector, who owns numerous cars of great historical value, including several Ferraris such as a 166MM, a 250 Spider California, two Daytonas - a coupé and a spider - and an Enzo. In the best tradition of the gentlemen connoisseurs whose commissions inspired Italian coachbuilders in the 1950s and 1960s, Yushiyuki Hayashi asked Zagato if it would be possible to create a special body for his Ferrari 575M, in the style of the famous 250GTZ Berlinetta of 1956. When Zagato received this request, it informed Ferrari of the project, which was considered an ideal opportunity to celebrate that model's 50th anniversary, and then created a car that harked back to the 250GTZ, built around the Ferrari 575.

The new 575 GTZ featured the Ferrari prancing horse on its bonnet and the 'Z' of Zagato on its side - a uniquely Italian expression of sporting style linking two of the world's most famous marques. Just as in 1956, when the 250GTZ was exhibited at the most important concours d'élégances, so the 575 GTZ was premiered 50 years later at the Villa D'Este Concours D'Élégance in April 2006. Later that same year the Ferrari 575 GTZ appeared on the Annuario Ferrari, confirming Maranello's wholehearted support for the project, and it was not long before other wealthy collectors began enquiring about the possibility of obtaining one of their own. Five more were completed, making six in total, each to its owner's individual requirements, making every one unique.

During the development of the 575 GTZ, Zagato also evaluated with Ferrari the possibility of designing an open version derived from it. In order to avoid having to cut up a 575 Coupé, Zagato instead chose to work with the 550 Barchetta, which had been designed as an open car from the start and thus possessed the appropriate structural stiffness and met the required safety standards.

The heart of any Ferrari is its engine, and the 550 Barchetta's 48-valve, 5.5-litre V12 is the same as that of the 550 Maranello, developing 485bhp at 7,000rpm. All main engine castings of this state-of-the-art power unit are in light alloy, the aluminium wet liners are Nikasil coated and the connecting rods are titanium alloy. The design of the inlet and exhaust systems is derived directly from that of Ferrari's Formula 1 engines, providing the optimum balance between volumetric and combustion efficiency. Variable intake geometry helps increase both torque and maximum power as its manufacturer explains: 'Ferrari's patented system incorporates a third plenum in the intake manifold which varies the fluid dynamic characteristics. Air is taken in via 12 electro-pneumatic throttle valves, which are governed by the engine's CPU. This control ensures optimum performance at all engine speeds, guaranteeing excellent torque delivery throughout the rev range.' One expects nothing less from Ferrari. The production run was limited to only 448 cars, each individually numbered and carrying a plaque inside with its own serial number.

Zagato's transformation of the 'ordinary' 550 to 550 Barchetta Zagato took all of five months to complete. The 550 boasts an electro-hydraulic top designed by Zagato, which automatically attaches itself to the windshield without the need for driver intervention. The entire system is accommodated immediately behind the roll bar and takes up only half the storage space required by most convertible tops, thus demonstrating Zagato's capability to develop innovative solutions not usually found on custom-made, limited edition models.

We have 7281 visitors online