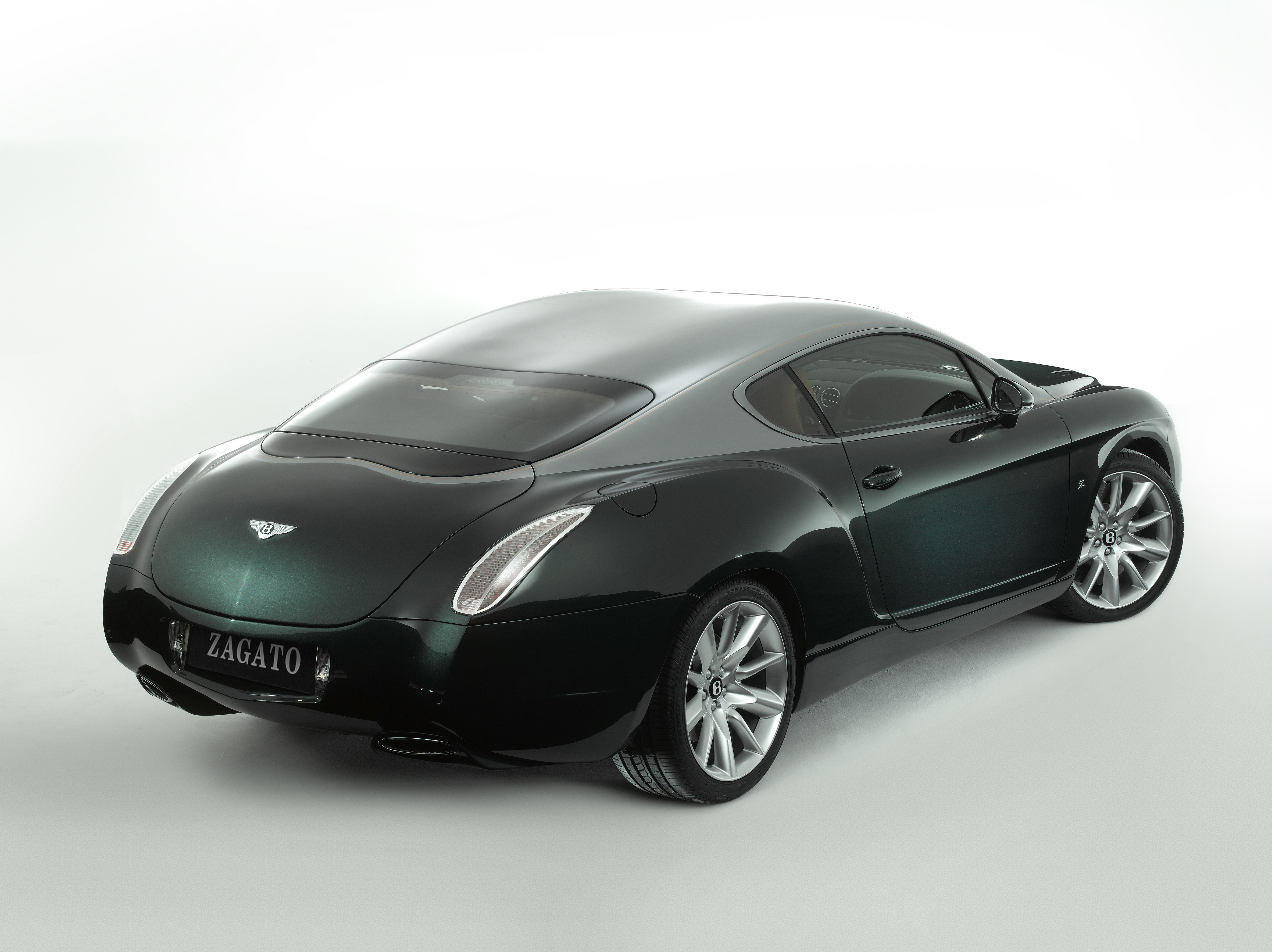 The Bentley project follows the long-standing tradition of Zagato Atelier co-operation with premium British automotive brands over several decades.
Ace, Bristol, Aston Martin, Jaguar, MG, Rolls Royce and Rover are among the UK-based brands that have worked with the Milan Atelier in the past to produce, what are now some of the most sought after collector's cars in the world.

Launched on an unsuspecting world at the 2008 Geneva show, the Conti GTZ is the love child of Dr Andrea Zagato and Bentley boss Dr Franz-Josef Paefgen, who met for the first time at the Pebble Beach Concours d’Elegance in 2006. In a tribute to its own rich and iconoclastic design history, Zagato showed a selection of models from the ’50s and ’60s alongside its most recent collaborations with Aston Martin, Maserati and Ferrari. Paefgen was so struck by the beauty of the older cars and the fact that the art of the carrozzeria (coachbuilder) was being carried forward by Zagato, he asked Mr Zagato if there had been any Zagato-bodied Bentleys. A Roller, yes, in 1926, came the reply, but no Bentleys. To which Paefgen reportedly said: ‘Let’s do one then.’

Two years later it’s ready to roll and, like every Zagato before it, its ‘beauty’ is very much in the eye of the beholder. Zagato likes it that way, of course. It’s not afraid to bin other Italian design houses’ work for its own unique and often controversy-courting interpretations. What some have considered the finest creations of Pininfarina and Bertone have ended up on the cutting-room floor. It’s all part of inhabiting that zone beyond exclusive that, increasingly, Zagato is making its own.

The method hasn’t changed much over the 89 years the Zagato family has been in business (the company was started by Andrea’s grandfather Ugo in 1919). For the GTZ, the starting point is Bentley’s best drivers’ car, the 600bhp, W12-engined Continental GT Speed. First, you have to buy one of these (£137,500) and get it to Zagato’s factory just outside Milan. Zagato then removes the original body – in this case Dirk van Braeckel’s modest masterpiece of understated aggression – and painstakingly applies the new one, made partly from aluminium and sharing not even the tiniest detail with the original. Only the headlights are carried over. The transformation takes four months and costs ‘from’ a further £400,000.

The Conti GTZ is still obviously a Bentley, but it’s one where British reserve has been artfully spliced with uninhibited Italian flamboyance, most notably manifest in the accentuated haunches and longer, flowing tail. Zagato’s trademark double-bubble roof and two-tone paintwork just add to the sense of parallel-universe unreality.

Fascinatingly, the GTZ doesn’t look all that good in profile, the elongated tail unsettling the front-to-rear balance. But when you start to circle the car it becomes clear that, with the foreshortening effect, the lengthy flanks enhance the three-quarter front and rear views spectacularly – a deliberate optical illusion Zagato readily acknowledges.

Sensibly, the cabin is largely left alone save for the Z motifs stitched into the seatbacks and the full leather headlining for the roof. Rear visibility is reduced to little more than a slit by the new roofline but is supplemented by a rear-firing camera that supplies the main facia display with images of blurred hedgerows and rapidly receding traffic.

Naturally, the GTZ goes and handles as well as the regular GT Speed – possibly a little better, since it weighs around 100kg less and the longer tail probably adds a few mph to the 200mph-plus top speed. There’s the same whispering refinement from the 6-litre, twin-turbo, quad-cam, 48-valve W12 engine, the same sublime smoothness. Floor it from a standstill and the astonishing motor/transmission combo seems to move the two-and-a-bit tons of German-engineered Bentley supercoupe with no effort at all; only your neck muscles register the violence of the act.

And, as with the GT Speed, it isn’t just the quantity but the quality of the acceleration that seems unreal. The low, almost infra-bass rumble from under the bonnet is all that signals the onset of a massive energy rush that flings the scenery into reverse and, if you keep your toe down, eventually blanches the blood from your cheeks. On a narrow road it can be a little scary at first, but once you’ve acclimatised it’s simply a superior way of travelling.

The GTZ corners beautifully, too. Braking and grip are supercar-strong and the combination of four-wheel drive and serious rubber equals phenomenal dynamic resolve. The result is a sense of agility and fluidity that completely (and stunningly) belies the car’s enormous weight. All that and a fabulously supple ride to boot.

Only nine GTZs were made.

We have 9079 visitors online