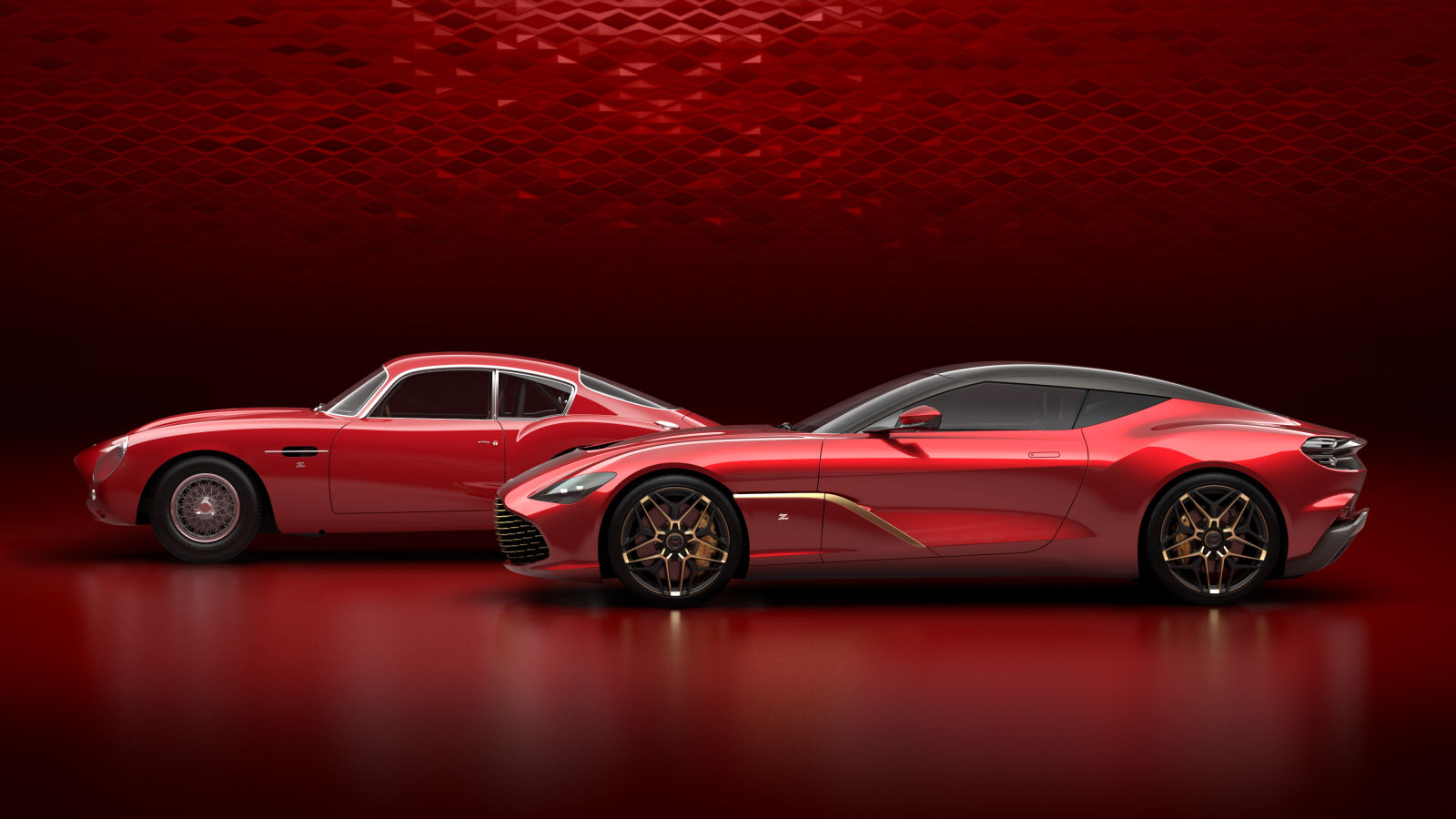 The 'DBZ Centenary Collection' is Aston Martin’s own way of celebrating nearly 60 years of collaboration of the famed Italian design house. The collection is made up of extremely limited edition cars that consist of this DBS GT Zagato (street legal) and the DB4 GT Zagato (track only).

Only 19 examples of the DBS GT Zagato will be built at Aston Martin’s Gaydon headquarters.

The other half of the project is the DB4 GT Zagato Continuation — a revival of the classic car on a tube-frame chassis with handbuilt aluminum body work, a 380 horsepower inline-six and a four-speed manual.

The DBS GT Zagato comes with an active grille, like you find on many new cars, which adjusts the aerodynamic profile of the front of the car to either make it more fuel efficient or to open up for better performance. Except on the DBS GT, there are 108 diamond-shaped carbon fiber pieces that lie flat when the car is off, but “flutter” open on startup to fuel the 5.2-liter twin-turbo V12 with air.

The most unbelievable part of this latest Zagato design is that there is literally zero rear visibility. Instead of a rear window made of glass, plexiglass or plastic there’s a single, solid carbon fiber roof piece which extends from the windshield all the way down the back of the car. If you need to see behind you, Zagato has fitted a rear-facing camera linked to a digital rear-view mirror.

25 March 2019, Gaydon: With the upcoming Centenary celebrations for world-renowned Italian design house Zagato soon upon us, it is the perfect moment to release the first detailed renderings of the new DBS GT Zagato; the second half of the remarkable DBZ Centenary Collection.

Created to celebrate the centenary of the legendary Zagato signature, the DBZ Centenary Collection is a unique project that pays tribute to an icon of the past and creates a classic of the future. This unique collaboration extends a remarkable creative partnership spanning almost 60 years. One that has consistently generated bold and breathtakingly exciting designs, the latest of which being the DBS GT Zagato.

A key design feature remains the iconic double-bubble roof. Stretching the full length of the canopy, this fresh interpretation delivers a clean and sculptural form that flows from the top of the front windscreen to the car’s rearmost tip, discarding the traditional rear windscreen in favour of a purer roofline. The double-bubble theme continues frontwards across the car’s bonnet, reminiscent of the shape and form seen on original Aston Martin Zagato designs. These flowing curves are complemented by the model’s wide wrap-around windscreen, removing any hard lines above the car’s shoulder line.

Muscular rear haunches deliver powerful and purposeful definition to the car’s side profile, while a unique wheel design, headlamps and a striking front grille – a key feature for all Aston Martin Zagato designs - continue to deliver a modern twist on the DB4 GT Zagato’s classic form.

Speaking of the DBZ Zagato Collection, Marek Reichman, Aston Martin Lagonda’s Executive Vice President and Chief Creative Officer, added: “In the DB4 GT Zagato Continuation we have one of the world’s most beautiful and instantly recognisable pieces of car design. Creating a car fit to stand alongside it was always going to be a formidable challenge, but also a great motivation. Both design teams at Aston Martin and Zagato have together risen to the task magnificently; taking the already fabulous DBS Superleggera and shaping something which retains its identity as an Aston Martin, but expresses itself as only a Zagato can. Sensational-looking and extremely rare, it is the modern incarnation of a timeless icon.”

Paired to the build run of 19 DB4 GT Zagato Continuations, the DBS GT Zagato will only be available as part of the £6m (plus taxes) DBZ Centenary Collection, thereby becoming one of the rarest and most coveted of all the modern-era Aston Martin Zagatos.

First deliveries to customers will commence QTR 4 2019 for the DB4 GT Zagato Continuation and QTR 4 2020 for the DBS GT Zagato.

We have 8052 visitors online