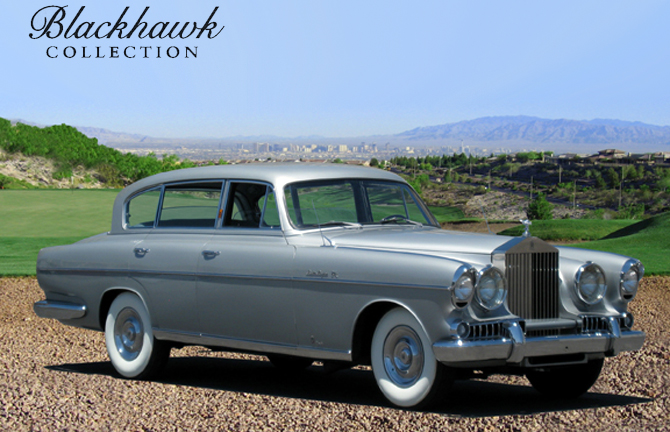 This 1954 Rolls-Royce Silver Wraith Vignale (Chassis #LCLW14) is a one-off bodied by Vignale. Built on a long wheelbase chassis custom ordered by Joseph Maschuch of New York, this chassis went to Alfredo Vignale Coachworks in Italy and was finished in spring 1955.

There were many unique special features ordered by Maschuch on this car like; the engine block, head, dynamo, starter, air cleaner, carburetor, and inlet manifold were to be painted green. The rocker cover was to be highly polished. All visible pipes under the hood were to be chrome plated. The front seats were electrically operated and the radio was a Becker Mexico. Under the back seat was a toilet that was mostly used to keep the champagne chilled. It was also equipped with a full bar, telephone and a television.

Rolls-Royce's first post-war model, the Silver Wraith debuted in late 1946 and employed a chassis similar to that of the Silver Dawn and MkVI Bentley, though with a 7" longer wheelbase at 10' 7". The Wraith, however, was only intended for traditional coachbuilt bodies rather than the MkVI's pioneering 'standard steel' bodywork. Only the bore and stroke dimensions were shared with the pre-war overhead-valve Wraith engine, the major advantage of this 'F-head' layout being its large valves and generous water jacketing around the valve seats. Manufacture of the short-wheelbase Wraith ceased in 1952, with a total production of 1,144; the long-wheelbase version continued until the introduction of the Phantom V in 1959, by which time 639 chassis had been completed.

Rolls-Royce typically attracted a clientele seeking understated elegance and privacy. Occasionally, however, the brand would strike a chord with more eccentric individuals for whom the art of arriving in style begins with a visible statement in the form of a unique and special vehicle. When Joseph J. Maschuch, Esq. of Maplewood, New Jersey (incorrectly noted as New York on the build sheets) placed his order for a Rolls-Royce Silver Wraith he was definitely not looking to glide quietly through life unnoticed.

Starting with a long wheelbase Silver Wraith, Maschuch enlisted the Italian futurists at Vignale to craft a one-off body like nothing else to clothe his special limousine. The classic Rolls grill is hugged by a pair of sealed beam P100s while a smaller set of hooded foglights capped the front fenders. The rear window and C-pillar were swept back and — much like a 1959 Lincoln Continental Sedan that seemingly cherry-picked from this car's design—the rear window was retractable. Even with the long wheelbase, the finely appointed cabin necessitated a long rear overhang to accommodate a full sized trunk. It was no doubt as matchless in mid-1955 when it was delivered as it is today.

If the look of the car wasn't enough to draw one's attention, the list of special features certainly would. Under the bonnet, the block, head, dynamo, starter, air cleaner, carburetor, and inlet manifold were all painted green. In addition to that the build sheets indicate that the "customer requires all visible pipes under the bonnet [to be] chrome plated." Inside, air conditioning kept the cabin cool while fine cabinetry in the rear compartment hid a full bar and a center mounted television. A Becker Mexico radio in the dash provided music to fit the occasion. All of the windows were of course power operated, as was the front seat. The chauffeur's compartment was trimmed in black leather, while Mr. Maschuch enjoyed grey broadcloth. Most distinctively, under the right rear passenger seat is a toilet with a gold painted toilet seat — although it is understood this was only used as a champagne cooler (at least one hopes it was not used interchangeably).

Today this special Rolls-Royce continues to exude the distinctive elegance it always has. Owned by the current vendor for over a decade, it has retained its original interior but has been cosmetically refreshed over the years. Its extensive factory build sheets, copies of which are included with the car, document the laundry list of special features that were installed from new while its original Silver Wraith handbook, jack, and tools are all still present. The car is featured on page 264 of Lawrence Dalton's Rolls-Royce: The Elegance Continues and was even made into a 1/43 scale model by ABC-Brianza.

While Vignale would famously body numerous Ferraris and other Italian sports cars, this Rolls-Royce is the only one for which the famous Italian carrozzeria ever penned the coachwork. A one-off, special coachbuilt Rolls such as this is a rare gem indeed and a reminder that "nothing succeeds like excess". What better way to arrive in style than in the back of your Vignale-bodied Rolls? You need a designated driver for this car, for this isn't a car to drive – it's to be driven in. After all, there's bound to be some fine French champagne chilling in that toilet – and life is too short not to indulge!

We have 7409 visitors online