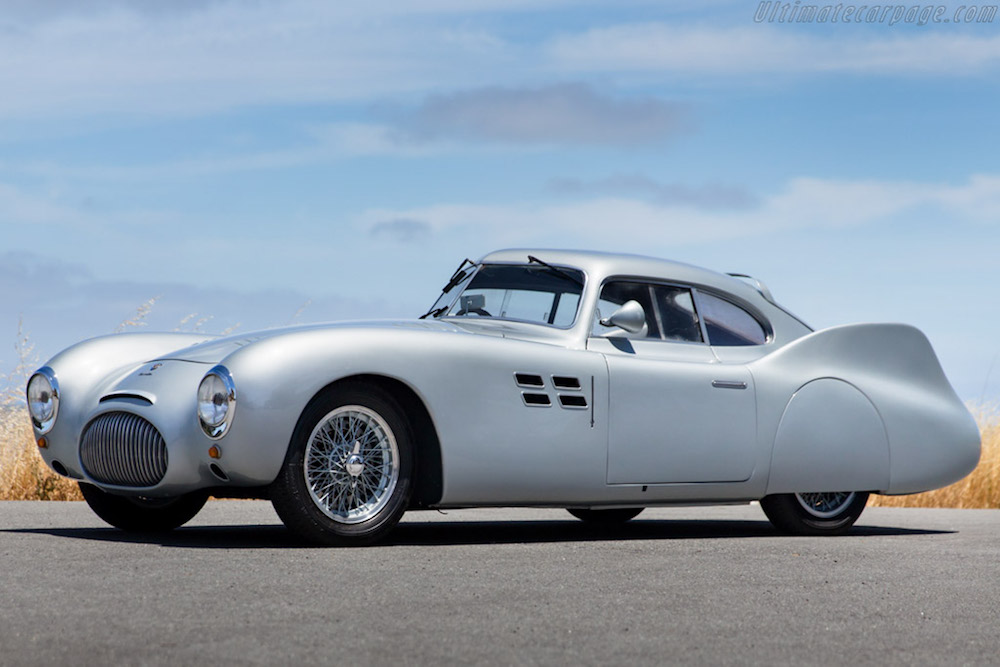 In the summer of 1946, this car was designed by Dante Giacosa and Giovanni Savonuzzi.
The first coupe was built by Alfredo Vignale, at the time the departmental head of Stabilimenti Farina.
When it arrived at the Cisitalia factory at the first time, in late 1946, Dusio congratulated him.
He hastily added a cheque for one hundred thousand Lire.
"Take this and don't mention it to anyone," Dusio added.
With this bonus, Vignale was able to set up his own carrozzeria.

Piero Dusio was a wealthy Italian industrialist, who had also proven remarkably quick behind the wheel of a racing car. Among his most notable results was a third place finish in the 1938 Mille Miglia, driving an Alfa Romeo 8C 2900B. Long before the end of the War, he devised a plan to add (racing) car manufacturing to his already long list of activities. Operating under the acronym Cisitalia (Compagnia Industriale Sportiva Italia), he asked leading Fiat engineer Dante Giacosa in 1944 to design a brand new, single seater racing car in the evening hours.

The father of the Fiat Topolino and still employed by the Turin-based manufacturer, Giacosa not surprisingly based the new Cisitalia on Fiat components. The tubular chassis, however, was bespoke and was among the very first to use spaceframe principles. The car’s suspension followed Fiat lines with lower wishbones and a transverse leaf spring at the front and a live rear axle. The finned hydraulic drum brakes and gearbox were also retrieved from the Fiat-parts bin.

The four cylinder engine used was also of Fiat origins but it was so extensively modified that it produced almost twice as much horsepower as the standard version. Displacing just under 1,100 cc, it was fitted with a dry-sump lubrication system, so it could be mounted lower in the chassis. The valvetrain was beefed up with dual valve springs and all the belts were replaced by gears for reliability reasons. An Abarth derived twin-carburettor intake and exhaust system was also fitted. The end result was 60 bhp at 5,800 rpm.

Fitted with a sleek single-seater bodywork by another Fiat engineer, Giovanni Savonuzzi, the new Cisitalia burst onto the scene in Turin, in August of 1946. Known internally as the type 201, it was referred to as the D46 for Dusio 1946. No fewer than seven examples were entered for what was the first Italian post-War motor race. Dusio had enlisted the services of some of the greatest drivers of the period, including Tazio Nuvolari, Raymond Sommer and Louis Chiron, but it was the patron himself who won the race.

For the following year, Dusio had commissioned the development of a two-seater version of the D46, which would be referred to as the 202. By that time Giacosa had stopped moonlighting for Cisitalia but he had left enough drawings for the 202 to be constructed in time for the 1947 Mille Miglia. Savonuzzi did stay and he penned an attractive, all-enveloping body both in Coupe and Spyder form. Depending on the body fitted, the new racers were referred to as 202 CMM and 202 SMM respectively.

Cisitalia fielded no fewer than three Spyders and two Coupes for the 1947 Mille Miglia. Nuvolari was in one of the open cars and despite being 55 years old at the time and suffering from respiratory problems, the ‘Flying Mantuan’ not only lead the Cisitalia charge, he was also leading the race outright at the halfway mark. He nearest rival was Clemente Biondetti in a 2.9 litre Alfa Romeo. Unfortunately, Nuvolari lost valuable time on the leg back to Brescia after heavy rain drowned his engine. He eventually finished second behind Biondetti and the oft repeated but impossible to verify story is that Nuvolari lost more than the 16-minute deficit stranded on the road side.

Although Cisitalias also placed third and fourth, it was Nuvolari’s epic effort that stood and henceforth the 202 SMM was simply known as the Nuvolari Spyder. It is believed that a total of 21 such competition Spyders were built with a further six based on slightly more docile underpinnings. The 202 chassis later received further accolades when a Pinin Farina designed and bodied Coupe became one of just six cars added to the permanent collection of the Metropolitan Museum of Modern Art (MOMA) in New York. This classic design greatly influenced Italian stylists for decades to come.

Dusio’s ambitions had helped establish Cisitalia as one of Italy’s leading racing car manufacturers within a matter of months. Sadly they also proved the company’s downful as Dusio commissioned Ferdinand Porsche to construct a mid-engined, four-wheel drive Grand Prix car. This drained all of the company’s resources, a fraction of which could have been used to continue developing the existing models further. As a result Cisitalia’s first sports racer, sadly also remained its greatest.

When Giovanni Savonuzzi designed the Cisitalia 202 CMM (Coupe Mille Miglia), he had in mind the fighters of the '40s. In 1946 he built a model two feet long, and sprinkled it with burned oil to mark the aerodynamic flow and takes it to the wind tunnel of Politecnico di Torino.
Vignale, then, simply followed the instructions to the letter of Savonuzzi, which also decides the color of the prototype: red, in honor of the red arrow of the Mille Miglia. But the participation wasn't lucky, Piero Taruffi withdraws before Cattolica, when fourth overall. The second attempt is a year later with a silver 202, which has no air vents on the roof (changed to improve the aerodynamics), side vent grilles are no longer oval but rectangular and an improved 1200cc engine is fitted. The Cisitalia 202 CMM red switched to a Roman driver who drove the car in some minor races after which the car was sold to an american collector.
This car came back to Italy in the late seventies, was restored in Turin and sold to a passionate in Venezuela.
Forty years later, in the wind tunnel, the 202 CMM shows a Cx of 0.29, a specific exception for a car at the time.
The car is presently owned by a japanese collector, who uses it in recalling events.

Traveling with this car is an adventure. Savonuzzi didn't worry for comfort: inside is a terrible heat, tempered only by two holes with a flip open roof and sliding windows. The noise is very strong because, obviously, in 1946 no precautions were taken for noise. Then there are the vibrations, because to save on weight there isn't mounted any seal that is not absolutely necessary. In return, the car has a weight of 680 Kg only, 50 Kg less than the Cisitalia Nuvolari spyder, a result achieved thanks mainly to the bodywork and the frame of aluminum tubes from the aeronautics industry.
Discomfort, heat, pain, but an unquestionable charm. "I remember the thrill of Savonuzzi in Turin in front of this car, before the restoration," said Nino Balestra, that day is there in the company of Carlo Dusio, son of Pietro, founder of the Cisitalia: "The car was complete, the original engine was on the floor, to be reviewed. The damage had been done to the fins, the most distinctive part of the car, cut and who knows why for some reason. Savonuzzi watched the stumps in silence, then took a piece of cardboard and redesigned the fins free hand, so a craftsman could rebuild them faithfully."

We have 8740 visitors online