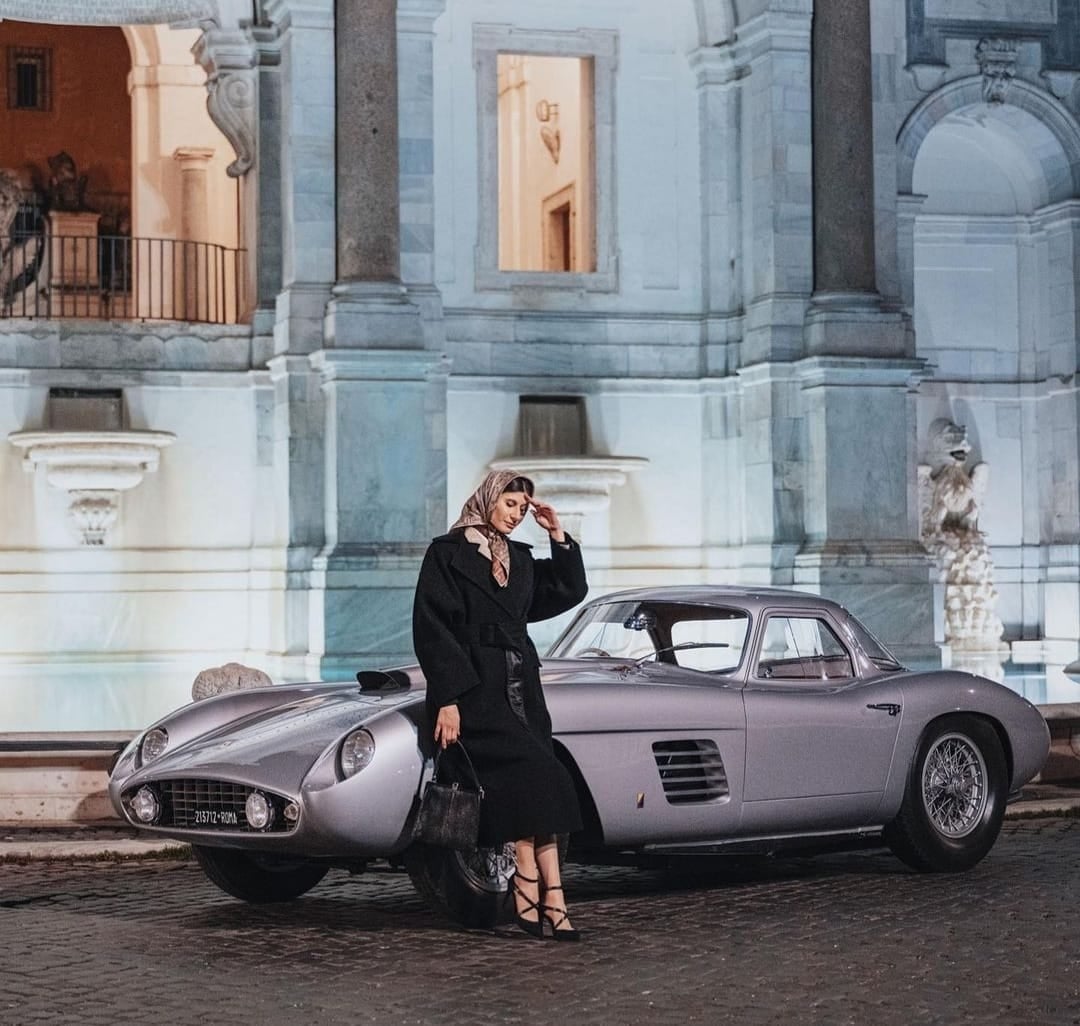 Chassis 0402 AM was one of 22 Ferrari 375 Mille Miglias built, most of which were destined for use as top flight racing cars.

0402 AM was originally completed as a Pinin Farina Spyder. Painted red with tan leather upholstery, it was purchased by Italian film director, screenwriter and producer, Roberto Rossellini.

Considered the father of European new wave cinema, Rossellini was responsible for some of the most successful Italian films of the 20th century. This enabled him to indulge in a fleet of exotic motor cars, some of which he occasionally liked to race.

Rossellini’s most famous outing came on the 1953 Mille Miglia. Driving his 250 Mille Miglia, Rossellini was at the southernmost checkpoint in Rome when Ingrid Bergman flung herself across his bonnet and refused to move until he agreed to withdraw from the event. The pair had recently married and Rossellini was racing against his wife’s wishes.

Rossellini purchased two 375 Mille Miglias in 1954: the Pinin Farina Spyder for himself (0402 AM) and a unique Pinin Farina Berlinetta Speciale for Bergman (0456 AM).

The red Spyder was one of 13 such cars assembled by Pinin Farina. Completed on March 20th, it was sold to Rossellini on 21st August.

Ferrari 375 MM Coupe Scaglietti was equipped with a V-shaped 12-cylinder atmospheric engine with a volume of 4.5 liters and an output of 330 hp. The engine was synchronized with a 4-speed manual transmission.

Ostensibly purchased as the ultimate road car of its day, Rossellini raced the car just once; at the Karlskoga Kanonloppet on October 3rd. Rossellini failed to finish the 20 lap event which was won by Erik Lundgren in his Ardun special.

Beforehand, the chairman of the Karlskoga Motor Club had to reassure Ingrid Bergman via telephone that the newly extended circuit was safe.

Afterwards, Rossellini gave in to his wife’s wishes and agreed to quit motor racing altogether.

Shortly afterwards, Rossellini crashed the car into a tree and it was sent back to the factory for the chassis to be repaired. Once this work was complete, 0402 AM was dispatched to the Scaglietti coachworks in Modena where it was rebodied as a Berlinetta.

The finished car emerged in 1955 and was delivered personally to Rossellini by Sergio Scaglietti.

Painted silver with a red leather interior, it was the first road car Scaglietti had built and one of the most beautiful automotive creations of its era.

Bergman was not so enamoured: ”Earlier I went to see his new Ferrari. It is a monster that does over three hundred kilometres an hour. I told him it looked like a flying saucer and it does. I sat in it for a moment and I put my fingers on the wheel in the sign of the cross like we do on the forehead of the children when they go to bed. I am sure Roberto does not know the effect it has on me when he roars off in one of these monsters.”

0402 AM was retained by Rossellini until July 1964 when he sold it to Mario Savona from Palermo, Sicily.

Soon after taking delivery, the Ferrari was stolen. A few months later, Savona managed to recover it from Naples, by which time it had been crudely repainted green.

Savona kept 0402 AM until 1970 when he sold it to his Parisian friend, Charles Robert.

Over the course of the next 25 years, Robert had the colour returned to its original shade and began a restoration. For most of this time, the Ferrari sat unused in an underground garage.

California dealer, Mark Ketcham, managed to track Robert down in 1995. In November of that year, 0402 AM was sold into the collection of former Microsoft president and chief operating officer, Jon Shirley.

We have 7111 visitors online