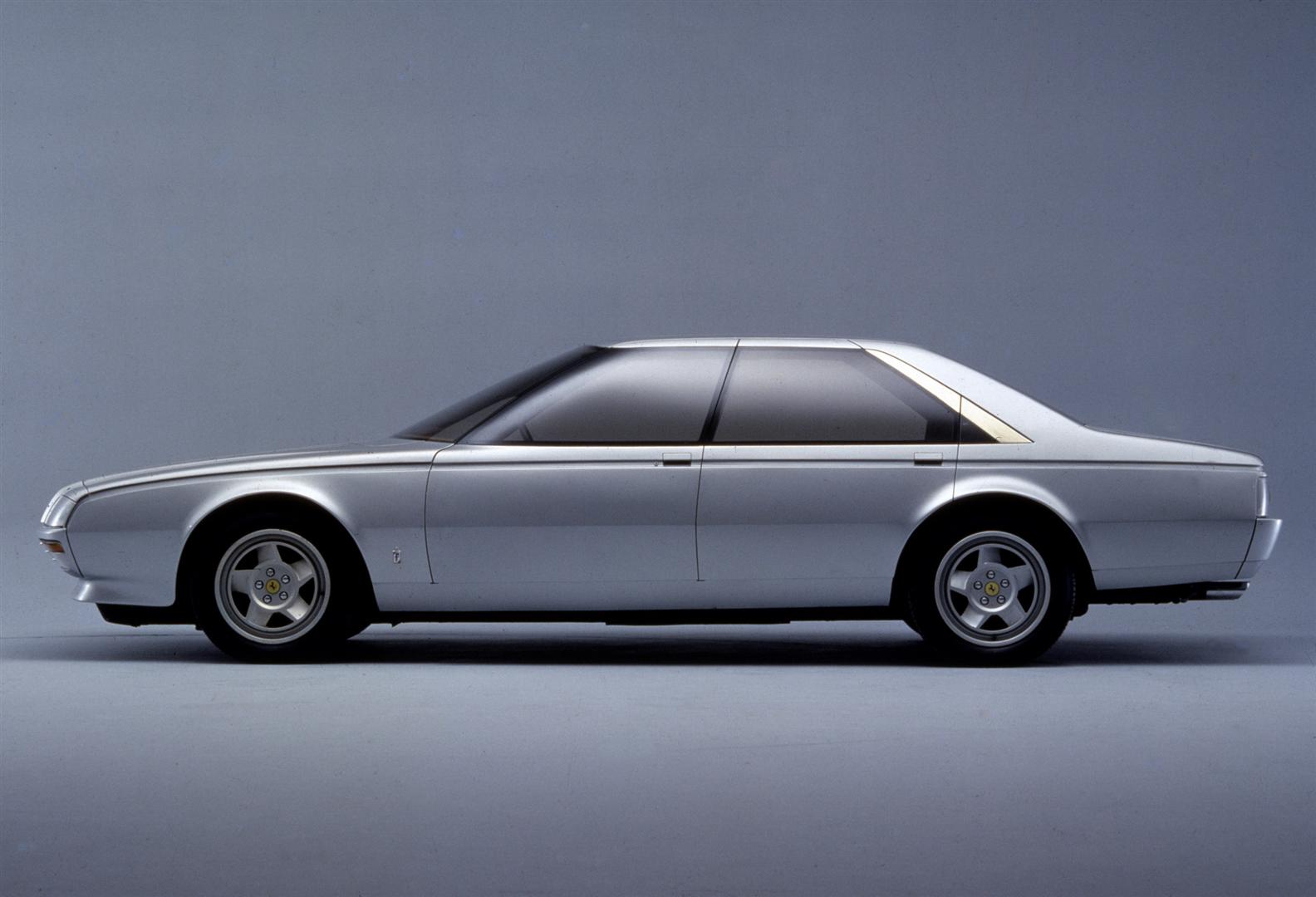 The Ferrari Pinin was a one-off concept car created by Italian-design studio Pininfarina (designed by Leonardo Fioravanti), to celebrate the design studios 50th anniversary. Discussed by Enzo Ferrari as being turned into a production model, the proposal was dropped and the car remains a singular concept model, the first four-door Ferrari ever built.

Background
Battista "Pinin" Farina had founded his design house in 1930, and after World War II began working with Enzo Ferrari on designing bodies for his road cars, to allow Ferrari to create funds to continue his motor car racing.

Design
The drive for the project came from Sergio Pininfarina, who had dreamed of designing an Italian competitor for luxury 4 door saloons like the Jaguar XJ, the Maserati Quattroporte (designed by rival Giugiaro), and the Mercedes-Benz 450SEL 6.9.

Leonardo Fioravanti led the design team, who had been responsible for most Pininfarina Ferrari designs since the 1960s, while detailed work was completed Diego Ottina. Fioravanti proposed a sporting sedan design, powered by a forward-located Flat-12 engine. New headlights from Lucas Industries allowed the front to be lowered, creating a thin egg-crate style grill. The design also included body-coloured rear lights by Carello, a concept which is now common on production vehicles. From the side, the A and B pillars were disguised by using smoked glass, and exaggerating the C pillar, creating a coupe-style side view.

The modern design interior used tobacco-coloured Connolly Leather, and a dashboard designed by Borletti akin to that in the Aston Martin Lagonda. The centre flat-screen display and all the dials were produced by Veglia, but are only visible when the ignition key is inserted.

Production
The prototype was created at Pininfarina's studio, on a donor Ferrari 400GT chassis. The car included a mock-up flat 12, mated to the shell of a five-speed manual gearbox. The car was unveiled by Sergio Pininfarina at the 1980 Turin Auto Show.

Enzo Ferrari was so impressed, that he discussed turning the design into a production vehicle. But after the car had undertaken a tour of that years motorshows, and after feedback from a customer tour in the United States, in the mid-1980s it was sold to Jacques Swaters, a Belgian racing driver turned businessman and car collector who ran a prominent privateer Ferrari endurance and sportscar racing team. Fioravanti later speculated that Ferrari's resistance to producing the car was due to the production quality of any resultant vehicle, where by "faults" were accepted on sporting cars, but that with the Pinin Ferrari would have been competing against the quality of experienced production manufacturers including BMW, Mercedes-Benz and even Rolls-Royce.

Mauro Forghieri, Technical Director of Ferrari’s racing department until 1987: “As you know, the final word on everything, especially on a possible brand new car [or] a concept, must obtain the placet of Enzo Ferrari in person. So after Turin, without any special preparation, [the Pinin] was brought to Fiorano Circuit and showed to him, to Ghidella and Sguazzini, Ferrari’s  general manager. I was there because my second office was near, so when I saw the car coming, I was curious. Then Ferrari said me to come and see it, in our local dialect, so I did. I would never [have said] the car wasn’t beautiful, but [it] really was nice. It was easy for me to congratulate, that it was brilliant in my opinion.”

Forghieri ended up being a main player in its transformation from a static show model into a running, driving luxury sedan.
“Then they decided the car [should] remain a one-off model… until my friend Roxy (Mr. Candrini, ex-Bugatti dealer and owner of Autospeak concessionaire in Modena) purchased it. Candrini senior and Candrini junior had an idea: why don’t we make it a road going car? A one-off as many other unique cars are, prototypes which actually work.”

Forghieri did the job: “First of all, we had to find a Testarossa engine and deeply modify it to match Pininfarina’s dimensions for the body. After that, the transmission and its linkage, rear axle, and also the car’s promised self-levelling shock absorbers, which was the most difficult part of our work.”

The result, a car few will experience, is said to be the real deal. “I drove the car often, many times to see if it was really usable on normal roads”.

After being displayed at the 2005 Essen Motor Show to celebrate Pininfarina's 75th anniversary, the car was sold in 2008 by RM Auctions on behalf of Swaters for €176,000. Given to Oral Engineering by its new owner with the brief to make it a running vehicle, the engineering team was led by Mauro Forghieri, who had been Ferrari's chief engineer during the 1960s and 1970s. In order to fit and cool a working flat 12 engine, the chassis was modified and strengthened, mated to an original 400GT gearbox, and commissioned a bespoke wiring loom.

The car is currently on display at the Ferrari museum, as part of a show of Pininfarina's ten greatest designs.

We have 6455 visitors online