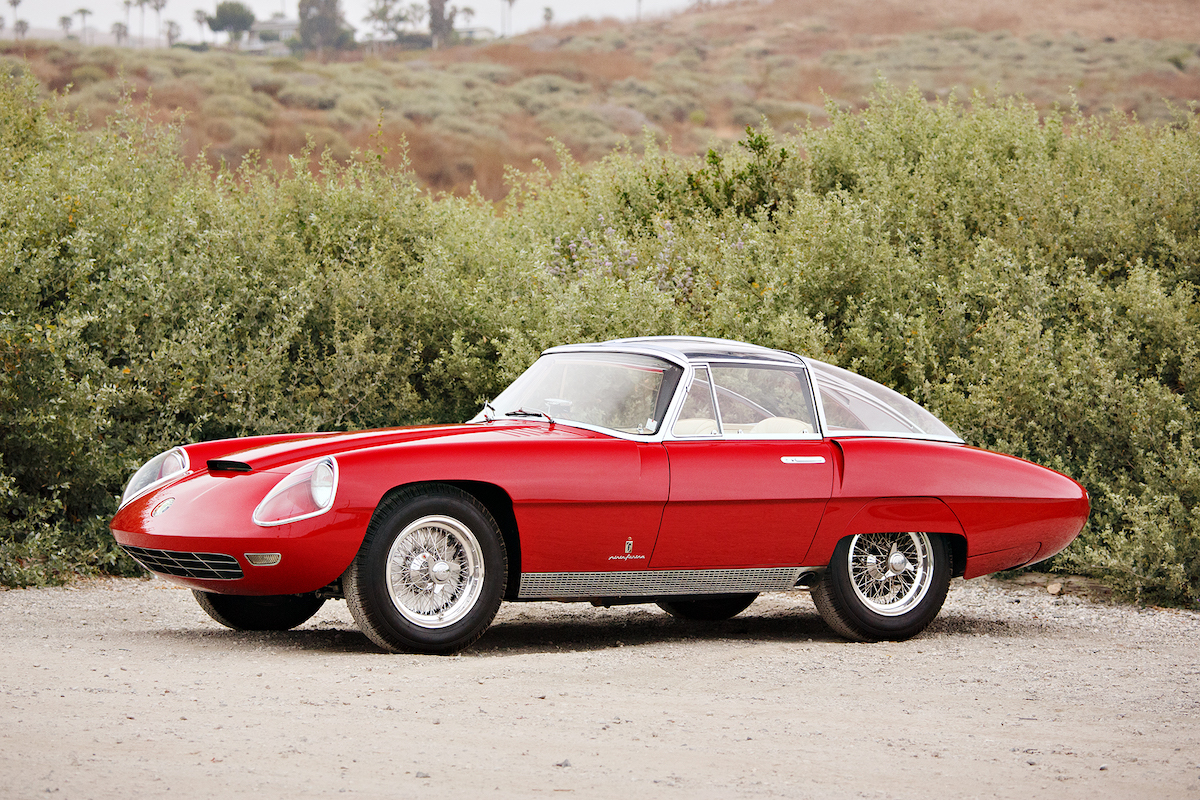 When Alfa Romeo suspended its racing activities in the early 1950s, several of the existing competition cars were discarded. Some were sold to privateers while two others were handed to specialist coach-builders Pinin Farina and Boano for future projects. Certainly the most famous of this pair is the 6C 3000 CM (chassis 00128) that went to Pinin Farina. It was first shown by the Turin-based carrozzeria in 1956 and would appear three more times with distinctly different body styles.

Chassis 00128 originally started life as one of six works cars built for the 1953 season. The 6C 3000 CM was a highly sophisticated machine with a steel tubular spaceframe chassis, independent front suspension and a DeDion rear axle. The engine was the latest development of Alfa Romeo's fabled twin-cam straight six. Displacing just under 3.5 litres and breathing through six Weber carburettors, it produced around 275 hp. Fitted with a Coupe body created by Colli, chassis 00128 is understood to have been used by Juan Manuel Fangio to finish second at the 1953 Mille Miglia.

With the Colli bodied removed, the low and compact chassis provided the Pinin Farina designers with plenty of room to be very creative. Known as the Superflow, the first show car based on the 6C 3000 CM was launched at the 1956 Turin Motor Show. It boasted a futuristic design with open front wheels covered by plexiglass panels. These also doubled as headlight covers. To relay the car's origins, a prominent Alfa Romeo grille adorned the low nose. Plexiglass was also used for the roof, which featured hinged, 'gullwing' sections. In keeping with the times, the tail sported prominent fins.

Later that year it appeared as the Superflow II in Paris repainted from its original white with a black stripe to red with a white stripe. The restyled and much sharper nose featured more conventional steel fenders. Plexiglass was only used for the headlight covers. The car was redone once more for the 1959 Geneva Motor Show, dubbed the Spyder Super Sport or Superflow III. As the name suggests, it boasted an open roof and the finned tail was replaced by a more elegant round rear end. The nose of the now all white show car was unchanged with the exception of the deleted headlight covers.

A few months later, Pinin Farina showed the ex-Fangio Alfa Romeo for one final time, at the 1960 Geneva Motor Show. Incorporating the best features of the previous versions, the car was now dubbed the Coupe Super Sport Speciale or Superflow IV. The plexiglass headlight covers returned as did the domed roof. This time the panels were not hinged but could could actually slide down and back underneath the rear window. As a result, the Superflow IV could be used as both a Coupe and Spyder. The elegant tail design of the Superflow III was retained.

The evolution of the Superflow illustrates the changing trends and influences during the 1950s and into the 1960s. The show car started out with a rather extreme, jet-age inspired design and finally ended with a strikingly elegant design, typical of the 1960s. It also influenced the design of future Alfa Romeo models, most notably the Duetto Spyder, which was launched in 1966. Following its many years of show duty, the Superflow IV was shipped to the United States where it was driven across the country and displayed in Alfa Romeo showrooms to gauge customer reaction.

The Turinese coachbuilder fitted four different bodies on the Alfa Romeo chassis between 1956 and 1960:

We have 8025 visitors online