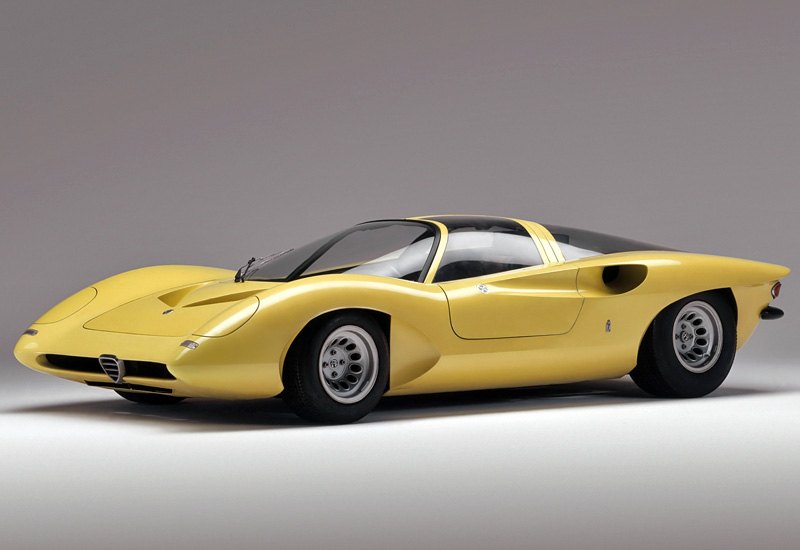 The Alfa Romeo 33/2 Coupé Speciale of 1969, also known as Alfa Romeo 33.2, is a Pininfarina designed concept car, first presented at the Paris Motor Show in 1969. This 2-door coupé was designed by Leonardo Fioravanti, then working at Pininfarina; the design was influenced by the Ferrari 250 P5 concept shown a year earlier at Geneva. The 33.2 featured hydraulically working butterfly doors and pop-up headlights. It is based on the 33 Stradale chassis No. 750.33.115. It bore a striking yellow paint.

There is no shortage of spectacular machinery that sport the Alfa Romeo badge but few can rival the Tipo 33 ‘Stradale’. First shown at the Sport Car Show at Monza in September of 1967 and officially introduced at the Turin Motor Show later in the year, the Stradale was the road-going version of Alfa Romeo’s Tipo 33 mid-engined sports racer.

Despite its obvious racing roots, it was a luxuriously appointed supercar, clothed with a Franco Scaglione designed body that will never cease to impress. The car’s underpinnigs would later also be used for several eye-catching design studies by Italy’s major design houses.

What was carried over from the racing car was the somewhat unusual tubular chassis. It consisted of three large diameter tubes, bolted together in what resembled the shape of an ‘H’. The transversely mounted tube was placed between the cockpit and the engine compartment. At the rear the longitudinal sections were angled inward to cradle the engine and gearbox. On both ends of the chassis more conventional cross-members connected the two arms of the ‘H’. The tubular side-members also contained the rubber fuel tanks. Subtle modifications to the original design included a 100 mm longer wheelbase to create additional interior space and some of the main chassis components were finished in steel instead of aluminium to increase rigidity.

Mounted amidships of the 33 Stradale was a mildly detuned version of the competition car’s 2-litre V8 engine. This was Alfa Romeo’s first V8 engine and was constructed entirely from aluminium. The dry-sump unit sported twin overhead camshafts that actuated two valves per cylinder and a Spica fuel injection system. It was capable of producing as much as 270 bhp but for reliability reasons it was restricted to ‘just’ 230 bhp in road trim. It was mated to a Colotti gearbox with six, all syncromesh forward gears. Suspension was by double wishbones on all four corners. Girling disc brakes provided the stopping power. The finishing touch of the rolling chassis was provided by the beautiful cast-aluminium Campagnolo wheels.

Upon completion, the chassis were fitted with a Franco Scaglione designed body. One of Italy’s most talented designers, Scaglione had previously worked for Bertone and now worked as a freelancer. Unfortunately he was not as productive as his contemporaries but most of the designs he did produce received universal acclaim. None more so than the aluminium body he created to fit the Tipo 33 Stradale. Its classically elegant and perfectly balanced design features a novel, door design with additional hinges in the roof. The doors are cut deep into the roof for easier acces. Even though fitted with a fully appointed interior and a slightly heavier variant of the 33 chassis, the Stradale only tipped the scales at 700 kg. The powerful engine and Scaglione’s very efficient shape helped the car achieve a top speed of 260 km/h.

Production of Alfa Romeo’s most potent road car yet commenced late in 1967. Unfortunately there were only very few takers for 33 Stradale, mainly due to its very steep price tag. Built alongside the racing cars, the project was also not on the top of the list of priorities. All examples were built by hand and no two are alike. The earliest examples had twin headlights fitted under the cover, which were later replaced by single lights. Vents were also added behind both the front and rear wheels to allow hot air from the brakes to escape. At least two were known to have been raced in period and one of these may have been fitted with experimental magnesium bits. In March of 1969 the model was discontinued by which time only 18 examples had been produced.

Several of the 33 Stradales failed to find an owner and five of these were handed to the likes of Bertone and Pininfarina. Bertone were the first to launch a Tipo 33 based show car; the ‘Carabo’ at the 1968 Turin Motor Show. This was one of the very first ‘wedge’ shape designs that would go on to dominate the 1970s. A year later Giorgietto Giugiaro / Italdesign showed the ‘Iguana’ at the same venue. Pininfarina also produced two show cars using the 33 Stradale underpinnings and the fifth machine was another Bertone creation, known as the Navajo. All five unique machines still exist today and are part of Alfa Romeo’s ‘Museo Storico’ collection along with at least two Tipo 33 Stradales.

While the Alfa Romeo 33 Stradale was not a big success in period, it is today considered as one of the most beautiful cars ever constructed. Its looks are backed up by a competition proven chassis and engine, which give the Stradale the performance to rival most of its exotic contemporaries. Only a handful of these fabulous machines remain today and most of these are cherished by major collectors. Fortunately they do come out of hiding once in a while for all to admire the machine’s exquisite lines.

Pininfarina received two 33 Stradale chassis and constructed a coupe and roadster body. The featured Pininfarina Coupe shares its overall design with the Ferrari 250 P5 show car launched the previous year, and it was long believed that it was the same fibreglass body. After a recent restoration by Pininfarina, it was concluded that it in fact is a new body. This, the most beautiful of the four design studies, is seen here at the 2005 Retromobile show in Paris, France, where it was one of the highlights.