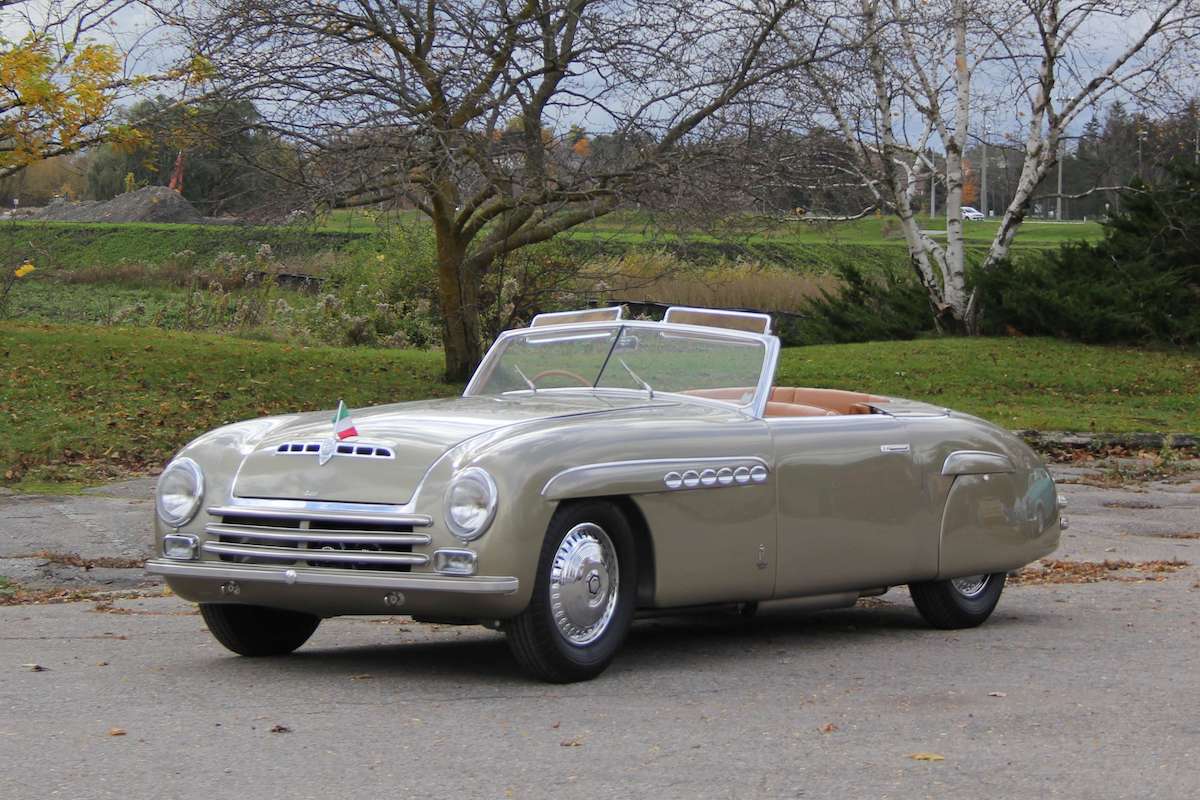 Ordered new by a wealthy lady from Milan, Giuliana Tortolli-Cuccioli, this car was bodied by Pinin Farina in 1946, on the base of one of the 14 Alfa Romeo chassis delivered to the coachbuilder in 1942, of which just six survive today. The owner lent her new car to Pinin Farina for a series of exhibitions, starting with the Geneva Motor Show in September 1946. It was then displayed on the Esplanade de Montebenon, in Lausanne, at the start of October, after which it headed off towards Paris for the Motor Show. However, because of the political situation in 1946, in the aftermath of the war, Italian manufacturers were forbidden from taking part in the Paris Salon. To get round this problem, Pinin Farina and his son Sergio drove the Alfa Romeo and a Lancia Aprilla to the capital and, having carefully cleaned them, they parked both cars right outside the Grand Palais. This adventure caused much amusement amongst the press: "That old devil Farina has opened his own anti-Salon! " Less than a week later, the Alfa Romeo was on show at the Concours d'Élégance in Turin where it won the ACI trophy for " the most beautiful open-top car. " The following year, it was awarded the Grand Prix d'Honneur at the 29th Concours d'Élégance in Monte Carlo. During these public appearances in 1946 and 1947, the cabriolet was the subject of numerous articles in the press. Pinin Farina then bought the car from Guiliana Tortolli and used it himself for about six months.

It was sold during 1948 to Leonard Lord, the Chairman of Austin, and became an inspiration for the Austin A90 Atlantic, before being used personally by the Managing Director, George Harriman. And it was then that an exciting new chapter in the car's life began. Holden Koto was a young designer collaborating with Raymond Loewy, who had offices in Paris, New York and London. In the early 1950s, Loewy signed a contract with British Leyland to design the new Austin Seven, and Holden Koto was sent to work at Austin for four months. While there, he expressed his huge admiration for the Alfa Romeo, and George Harriman ended by selling it to him, well below its value, as a bonus. Koto used the car for the next 12 months before taking it back to America with him. Unfortunately, while the car was being unloaded from the voyage, the front bodywork and the bumpers were damaged. He took it to be repaired at Raymond Loewy's workshop, and at this point the decision was taken to change the existing metallic champagne livery to a light metallic green. Signs of this work were found when the car was later restored.

Some time later, Koto decided to sell his car and his son David drew a cartoon showing the owner offering his car for 5000 $. It was bought in 1952 by James Kent from St Louis, who " americanised " it slightly. He removed part of the rear wings and the hubcaps, and fitted whitewall tyres. This was the start of a period of decline, in which the car suffered years of neglect. Owners followed one after the other : George Monning, from Collinsville (Illinois), Clark Moore, from Huntsville (Alabama), Jerry McAlevey, from Inglewood (California). The Alfa Romeo was later found in the restoration workshop of Hill & Vaughn having been taken to bits and abandoned. The parts were subsequently bought by a Japanese businessman who, several years later, sold them to the current owner, from The Plains (Virginia).

The Alfa Romeo was then entrusted to the Guild of Automotive Restorers, in Bradford (Ontario, Canada), for a restoration that began in 2008. This began with a detailed evaluation of the work required and an inventory of the missing parts, identified through the Alfa 6C 2500 spares catalogue. When the car was dismantled, signs of the repair work carried out by Loewy were clearly visible. The first component to be restored was the chassis, following which the work stopped for a while, before starting again in 2013. The car was re-assembled " bare " and then extensive work was carried out on the aluminium panels, that had become very fragile. The restorers worked to retain as many of the original panels that had been shaped by Pinin Farina's team as possible. The frame of the hood was also re-done, and a great deal of care was taken to ensure its shape and the materials conformed to the original. The interior was relatively well preserved, and despite being in poor condition, the leather seats were complete, providing a template for new upholstery. The original steering wheel had disappeared but research revealed that it had been an " Anti-Seismic " model designed by Mario Revelli Beaumont. As this was impossible to find, a new copy was made, working entirely from photos of similar models. In the same way, the chrome strip along the dashboard had to be re-created, working from detailed photos, and Koto's recollections. Another problem to be resolved was the missing hubcap. A special metal-stamping tool had to be made to make a piece that resembled the others, complete with the same imperfections.

A total of two and a half years were required to carry out this considerable task and today, the car is flawlessly faithful to its original appearance. This includes the paintwork which has been returned to the original metallic champagne colour. We urge interested parties to consult the restoration file that comes with the car, in order to appreciate the level of care that has been taken throughout this project.
This unique masterpiece has a form that was completely avant-garde for the 1940s. There are a few nods to the United States (with, for example, the 'porthole' inlets on the front wings), and with enclosed " ponton " styling that was well ahead of its time. A truly extraordinary automobile, this is an important milestone in the history of automobile design, fitted to a noble mechanical base. This car will attract attention wherever it goes, and give its owner the satisfaction of being part of a unique story, while sitting behind the wheel of an automobile like no other.

We have 7055 visitors online