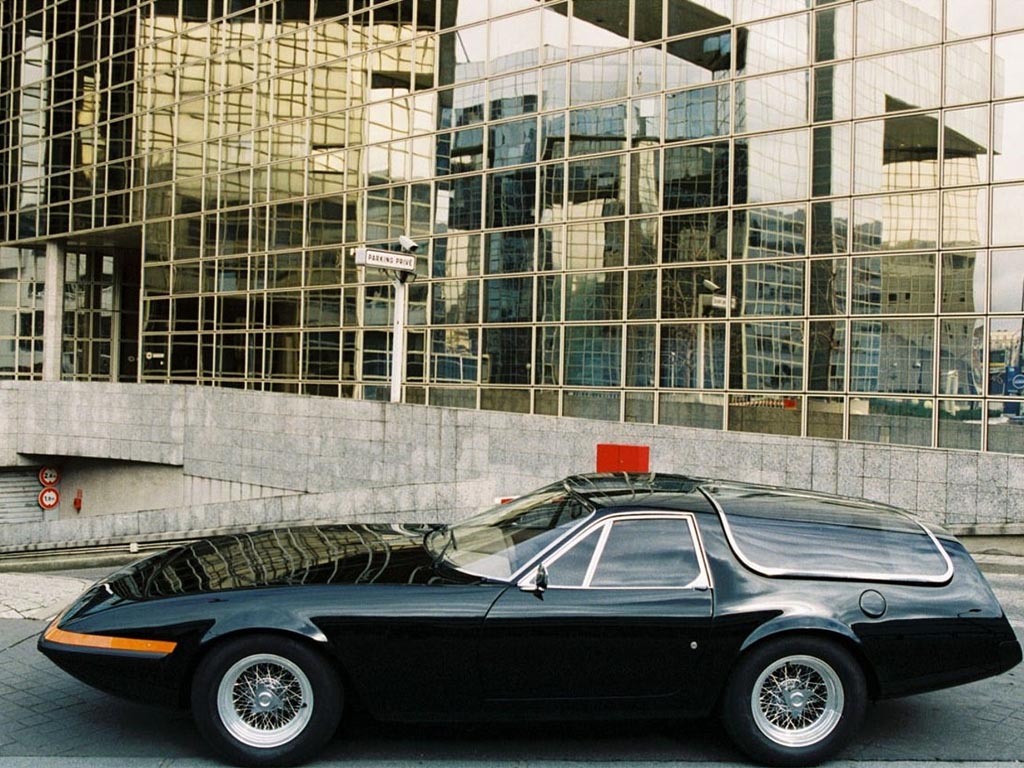 The Ferrari 365 GTB/4 Daytona pictured here was rebodied in 1974, receiving a very special Shooting Break body, designed by Luigi Chinetti Jr. and Gene Garfinkle as the spiritual successor to the Vignale-bodied 330GT and famous 250 ‘Breadvan’.

Luigi Chinetti Junior, son of the three-time Le Mans winner and U.S. Ferrari importer Luigi Chinetti Senior, chose to experiment with the Daytona's design and penned an idea for a more functional and practical Ferrari with detail layout by Gene Garfinkle.
He convinced Bob Gittleman, an architect in Florida, that a Daytona wagon would be the ultimate answer to everyday shopping.

Recently, this unique piece of coachwork has had a complete restoration by the original builders Panther Westwinds.

The car is scheduled to be auctioned by Gooding & Company in Pebble Beach in August 2016.

THIS CAR
While the celebrated era of custom-coachbuilt automobiles on powerful, elite-level chassis had all but evaporated by the early 1970s in favor of more production-friendly designs, a few well-heeled Ferrari buyers still craved a truly unique automotive statement. Exemplifying that mandate, this 1972 Ferrari 365 GTB/4 is the sole Daytona converted into a bespoke “Shooting Brake.” Numbered 15275, it was the 805th 365 GTB/4 produced.

Following completion, it was delivered new to Chinetti-Garthwaite Motors, the Philadelphia-area Ferrari dealer, where its transformation originated when architect and builder Bob Gittleman visited Chinetti Motors to ask for “something a bit different.” Luigi Chinetti Jr., who had already designed a distinctive Vignale-modified Ferrari 330 GT 2+2, was perfectly suited to fulfill such a request.

Accordingly, Mr. Chinetti designed a sleek Shooting Brake roofline for the Daytona, extending straight back from the B-pillar to the rear Kamm tail, including a large non-opening rear window. The rear cargo area was now accessible with twin upward-opening glass panels, and the nose of the car acquired a lower fascia and revised grille. Once the design drawings were completed, Robert Jankel’s Panther Westwinds, located in Surrey, England, and renowned for quality, was selected for the build. As Mr. Chinetti related in a December 2001 Classic & Sports Car article, “We were distributors for Panther Cars in those days. … We’d been over there, and it was a nice, high-quality shop,” prompting him to explore the fascinating opportunity.

Mr. Jankel, reflecting on the job in the same article, stated, “It was pretty straightforward. We got some rough sketches and had to interpret them and basically design the car. He (Chinetti) didn’t specify how it should be finished, but it has a very exotic interior.” In particular, the Daytona’s instruments were all repositioned to a central stack within a richly trimmed, wood-faced dashboard. Also in keeping with the vehicle’s classically inspired sporting opulence, the rear cargo deck was fitted with rich wood panels.

Following completion, the sleek, alloy-bodied Ferrari two-seater was delivered during the winter months of 1975-76 to Bob Gittleman in Florida. Uniquely combining the outstanding technical specifications and prodigious performance capabilities of the original Daytona, the finished vehicle evoked vivid images of the prewar era’s upscale custom-built and luxurious hunting vehicles and the sporting life.

Immediately capturing attention and international press, 15275 was soon featured on the cover of the Ferrari Club of America’s Prancing Horse magazine and in Road & Track. Mr. Gittleman retained the car for several years, and in the 1980s it passed to noted owners including Joe Marchetti of Chicago, John Mecom of Houston, and Bill Kontes, then in New Jersey. About 1999, the Ferrari was exported to Belgium, and it was displayed at the Concours d’Elegance at Paleis Het Loo in the Netherlands in 2000 and exhibited at the Cartier Style et Luxe Lawn at the Goodwood Festival of Speed in 2001.

The current owner acquired 15275 in late 2013 and commissioned its total refurbishment, including a bare-metal repaint and a mechanical restoration performed by an official Ferrari service agent. Importantly, Andrew McKenzie, a former Panther artisan who participated in the car’s original construction during the 1970s, was involved in the restoration and ensured its exceptional authenticity. Post-restoration, 15275 once again graced the show field, this time at the 2015 Salon Privé Concours d’Elégance.

With less than 4,500 miles indicated and offered in concours quality throughout, this spectacular, one-of-a-kind coachbuilt Ferrari is eligible for the best concours events and shows worldwide and is ready to enchant all who are lucky enough to experience it firsthand.

We have 9156 visitors online