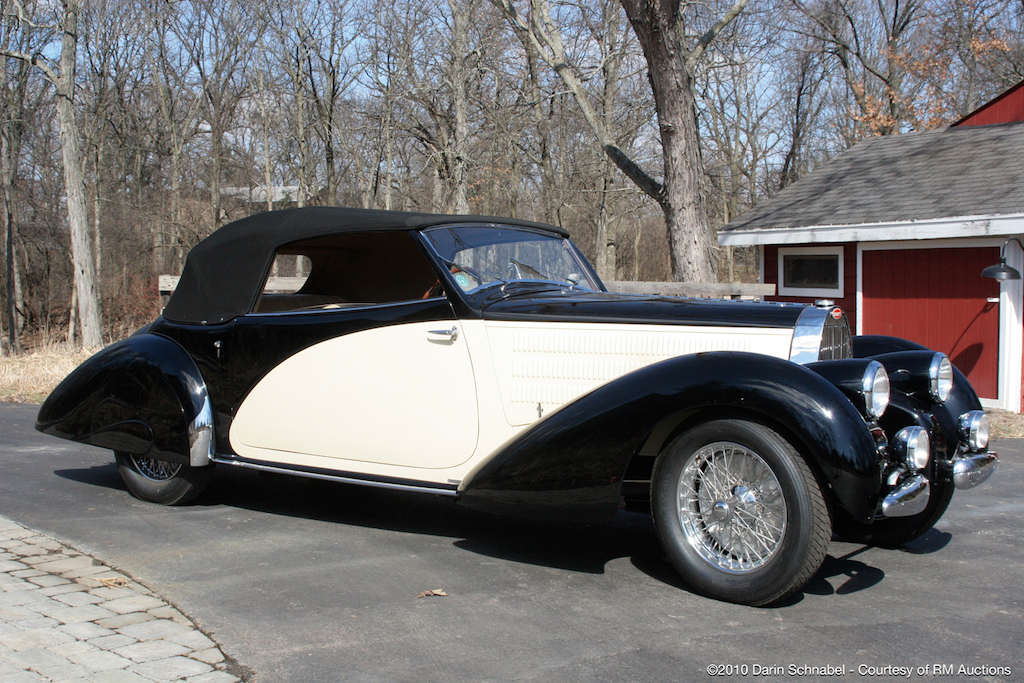 Letourneur & Marchand constructed bodies on no less than 19 Bugatti T57 chassis. Some were called '4 places cabriolet' and a few were in 'Aravis' style. There's also one listed as 'Galibier', which would be a four door Berline.

Bugatti T57 #57809 is a 4 places Cabriolet. As researched by French Bugatti historian Pierre-Yves Laugier, chassis 57809 was ordered on December 22, 1938 by M. Gerand Ankerman from Paris. The chassis was dispatched to Letourneur & Marchand in February 1939. It had been registered in Paris before being sent to the coachbuilder. The completed car was delivered on April 6th, bearing the handsome three-position drophead coupe body, coachbuilder's number 2957. The last drophead four-seater completed by the coachbuilder in 1939, it had special chromed Cibie headlamps, a large STOP lamp at the rear and a central lamp in front. Painted black, it had black leather upholstery and a cream top. All four wheels had plain discs, the rears behind fender skirts. Delivered price was 133,455 FF (then equivalent to $3,350). The original engine number was 952C.

By May 1940, Capt. Ankerman was in London, but his Bugatti remained in Paris, used by Yvonne McDonald, Commandant of the Mechanised Transport Corps. McDonald was recorded by the new Bugatti factory at Bordeaux to be the keeper of the car on February 18, 1941, having left it there the previous June. It has been suggested that it was hidden there to keep it out of German hands. In any case, it dropped from sight, and in June 1945, the factory compensated Capt. Ankerman 120,000 FF (barely $1,000 at the postwar exchange rate) for its loss.

It turned up with a different registration, reflecting its discovery near Paris in 1945. The doors were marked ?Mission Interalliée? (inter-allied mission), implying that it had been inducted into wartime service for the Allied forces.

On June 28, 1947, it was sold by the French government and registered in the name of Louis Dazin at Maisons Laffitte with number 9738 YC8. It was quickly re-registered in Paris, the same day, as 4840 RP8. There are photographs of it, bearing that number, at a concours d'elegance at Enghein, an upscale spa resort on the northern periphery of Paris, in 1950. Not long afterwards, it was sold to Pierre Ferrif of Cantal in southern France. It was soon sold again, and around this time the engine was changed for the current one, which was originally in chassis 57597, a Gangloff-bodied drophead four-seater. In May of 1961, it was purchased by Dwight Johnson and exported to the United States.

Soon thereafter, it was acquired by the Adams family, joining a stable of several other Bugattis. American Bugatti specialist O.A. 'Bunny' Phillips did some restoration work on it in the 1970s.

The history of the car picks up again in London in 2002. That year, the Bugatti was purchased by the current owner from Paradise Garage. He sent it to Jim Stranberg's High Mountain Classics in Berthoud, Colorado for a complete restoration. It appeared at Pebble Beach in 2003, ran in the Tour d'Elegance and participated in two rallies with the American Bugatti Club. There followed an endless string of accolades, class wins at Amelia Island in 2004 and at Greenwich, Connecticut in June of that same year. In 2005, it participated in the Australian International Bugatti Rally, driving from Sydney to Ballarat. Alas, engine damage atop Mount Buffalo required replacement with a spare. That July, it took a class win at Cranbrook, Michigan and ran in the Bugatti rally at Elkhart Lake, Wisconsin in September.

The year 2007 saw Most Elegant honors at Quail Lodge, at Rocky Mountain Classic in Colorado Springs, and at Barrington Hills in Illinois. It was People's Choice at the Geneva (Illinois) Concours in 2008 and made a guest appearance at the 'Year of Bugatti' exhibit in 2009 at Pebble Beach, where it also completed the Tour d'Elegance. Its most recent events were an entry at Quail Lodge in August 2010 and a thousand miles of International Bugatti Rallye in California immediately afterwards.

We have 8126 visitors online