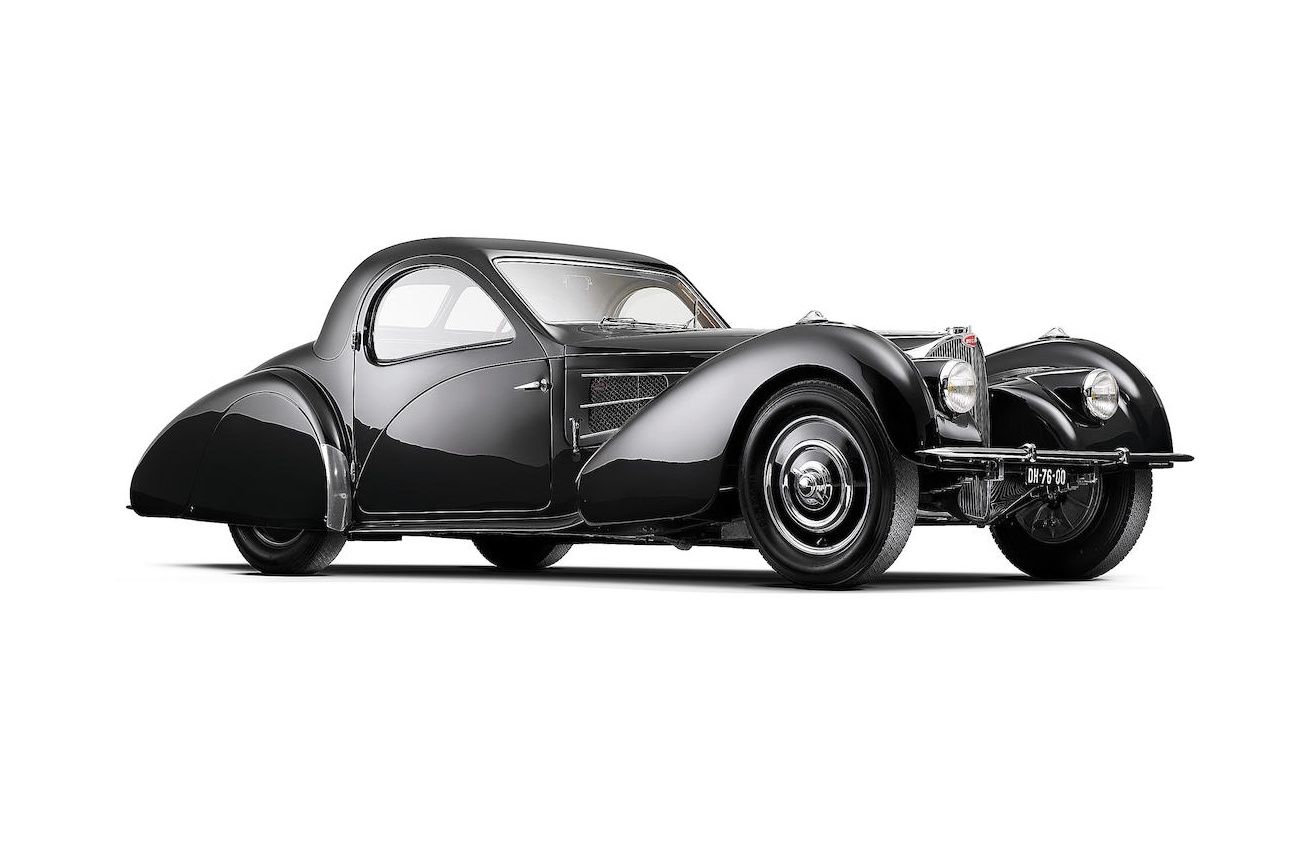 In the Spring of 1937 Europe was enjoying a fragile peace and in France prosperity was finally returning some 19 years after the horrors and devastation of The Great War. Nevertheless, the sight of a sensational Bugatti Type 57S Coupé in the staff car park outside the provincial hospital at Thouars was extraordinary indeed. The excruciatingly expensive Type 57S Bugatti had been introduced in 1936 and even the most ardent motor car observer would only have seen this model in the motoring press.

Dr. André (‘Charles’) Chauvenet was born in January 1900, the son of a doctor, and it was that career path that young André followed after his marriage in 1919. His brother Marcel was a sculptor of some repute. Young André completed his medical degree at Bordeaux and by 1936 had been promoted to Senior Surgeon at the Thouars hospital, some thirty miles North-West of Poitiers. It may be considered remarkable that one so young had achieved such seniority and his credentials as a Bugattiste had already been well established through the ownership of a Type 49 and two Type 57s before he placed his order in 1936 for one of the exclusive Type 57S models.

Chauvenet selected his new car in a careful quest for the highest standards in road holding and engineering refinement, maximum performance combined with comforts that one of his social standing would expect and an elegance reflecting the very pinnacle of styling finesse in the mid-1930s.

Bugatti’s Type 57S ticked every one of those boxes – perhaps the ultimate pre-war sports car. Its production run was but brief as manufacturing costs were excessively high, however Chauvenet recognized the outstanding nature of the beast. Bugatti’s Type 57 had already established its credentials but although the 57S shared many of its features, its differences set it in a league apart. Mechanical excellence was achieved by fitting a modified crank case with dual oil pumps and dry sump lubrication. High compression pistons gave the new engine a significant performance edge and the clutch was reinforced to cope with the extra output. Ignition was by a Scintilla Vertex magneto driven from the left-hand camshaft. The fundamental difference between the 57S and the standard 57 cars however lay in the frame design. The new low-slung frame featured a shorter wheelbase, the rear axle passing through the frame, while de Ram shock absorbers provided damping cleverly engineered to increase with speed. The new low-slung chassis and distinctive vee-shaped radiator design of the 57S, (with no less than 46 vertical slats!), was a gift to the stylist and the Jean Bugatti-influenced Coupés’ styling blended impeccably with the sculpted radiator design. It was not surprising that Bugatti should field a formidable team of specially designed 57S racing cars, winning in 1936 Le Grand Prix de l’A.C.F., le Grand Prix de la Marne and le Grand Prix du Comminges and setting new One Hour, Six Hour and 24 Hour records at Montlhéry. Notably Jean-Pierre Wimille and Robert Benoist drove one of these cars to victory at Le Mans in 1937 at an all time record average speed of 85.125mph and covering 2,043 miles in 24 hours. With these credentials, little wonder therefore that Chauvenet’s car of choice in December 1936 was the 57S.

Initially Chauvenet placed his order for a three-seater coupé but on firm instructions from his wife was later to elect for his wife’s two-seater preference, final confirmation of the order being placed with Gangloff in January 1937. Chauvenet’s car was to be one of just three Coupés built by Gangloff on the 57S chassis. The original supplying dealer was Monsieur B Arnaud, garagiste of Niort. Arnaud and Chauvenet must have been well known at Molsheim as Ettore Bugatti - Le Patron - is known to have been selective in his choice of customers for the ultra special 57S. Relations were undoubtedly strained between Arnaud, Chauvenet and the Bugatti factory in the long lead time prior to delivery of the car. Copies of contemporary correspondence on file indicate that Chauvenet was a demanding and tenacious customer, characteristics which no doubt later served him well in his leading role in the French Resistance.

Chassis no. 57532 was finally tested at the factory in April 1937, registered on 28th April that year and duly sent to Gangloff for the coachwork to be fitted. Chauvenet specified black livery with tan pigskin upholstery, requesting that his AC monogram be discreetly placed on each door. Correspondence suggests that Chauvenet was never fully happy with his new car, initial engine vibrations being sorted out at the factory, however Chauvenet throughout his ownership complained about the car’s handling, perhaps caused by the over-sophisticated de Ram shock absorbers. In the Autumn of 1938 Chauvenet suffered an illness and the car was laid-up, emerging from storage in April 1939 with just 15,000 or so kilometers recorded. The car then passed to a Dr. Dinoire whose intention was to rebuild 57532 as a racing car. He planned to shorten the chassis, fit a supercharger and update the braking system to Lockheed hydraulics. Although this work commenced with the removal of the coachwork, which was carefully stored with the car during the war years, the racing car project was never proceeded with and the coachwork was subsequently refitted to the chassis in the garage of M. Arnaud at Niort.

In February 1943, 57532 passed to the ownership of E. Mouche of Paris and it is not known for how long he kept the car. In January 1948, 57532 was in the celebrity ownership of Danish/French singer, songwriter and composer, Georges Ulmer, then at the peak of his fame singing to packed houses in Paris, London, Las Vegas, New York and Tokyo. His 1946 hit song ‘Pigalle’ was performed by Bing Crosby, Danny Kaye and others, placing Ulmer in 1948 at the peak of his career. Little wonder that he chose and could afford the sensational Type 57S. During one of his U.S. tours, his heavily pregnant wife sold 57532, her doctor advising that it was not a good car for her back.

In December 1951, the car was owned by Raymond Dupont, a Parisian painter, and in March 1952 was acquired by St. Quentin brewer, Henri Berlaimont, whose itinerary of previous Bugattis had included a Brescia, Type 30, Type 43 Gran Sport, a Type 40, a Type 57 Atalante (stolen by the Germans in the War), a Type 50, a Type 50T and a Type 57C. Here was a discerning owner who appreciated the finesse and blistering performance of the 57S. During Berlaimont’s ownership 57532 was overhauled by Bugatti specialist Hermanns in Asnieres at the Garage du Pur Sang.

Hermanns sold 57532 on behalf of Berlaimont in the Summer of 1953 to fellow Bugattiste Robert Ford who toured Europe extensively in the car which he kept until his death in 1982. 57532 was subsequently to pass through the hands of Michel Seydoux who commissioned a restoration by France’s premier restoration house, Lecoq, the car later joining the collection of Swede Hans Tulin before acquisition by the present long term owner in the early 1990s.

Its new owner had been brought up in a home environment where there was generally at least one Bugatti in the motor house and his interest in the marque was further fostered by the acquisition at auction of a Type 35 in 1976. 57532, now in supercharged form but otherwise a car of outstanding originality, entered a period of meticulous ownership, its new owner demanding a car that would not only sit comfortably on the most exclusive concours d’élégance lawns world-wide but would also perform impeccably at high speed on the most testing Continental and international driving events. Major cosmetic work undertaken included reupholstery as closely as possible to the original pattern and using only finest materials. An engine vibration – which had haunted original owner Dr. Chauvenet and probably subsequent owners too – was finally solved, the original racing crankshaft fitted to the car being carefully balanced, transforming both performance and smooth running. The de Ram shock absorbers were rebuilt, gearbox dismantled and rebuilt as necessary and the hydraulic brakes overhauled. The Scintilla Vertex magneto was reconditioned in 2004. The vendor enthuses about the outstanding performance of this car on more demanding events and has campaigned it on the Mille Miglia and the equally testing Budapest-Vienna-Prague Rally. Although well able to hold station with the likes of 8C Alfas on these events, 57532 has proved also a most flexible and comfortable car for more gentle Continental touring.

On Concours lawns there are few more spectacular and exotic pre-war coupés than 57532, its Jean Bugatti-influenced coachwork now gently understated in its black livery with fine gold coachlining and the snug interior superbly appointed with brown leather upholstery and black carpets. Of particular note are the fine wood surrounds and cappings in the interior – Gangloff attention to detail at its very best. Driving equipment includes Marchal Equilux headlamps with Marchal side lamps, a fine blade front bumper with over-riders, a Tenor Cicca trumpet horn mounted beneath the bonnet and the near-side front wing incorporates a 14-liter capacity oil tank. Dashboard instrumentation is all correct and working and features a Jaeger 0-200kph speedometer, Jaeger amperes meter, a Bugatti Telefix essence gauge, oil pressure and water temperature gauges and a Jaeger 0-8,000rpm rev counter. Interior furnishings include a tilting interior mirror, courtesy light and sun visors, while a scuttle-top ventilator provides cabin cooling and passenger comfort. The car sits on 18 inch Dunlop Racing tires.

Testament to its overall quality and appeal are the Concours awards that it has received, which have included Trofeo Girard-Perregaux – the special prize of the jury and special ‘Mention of honor’ in its class at the 2008 Concorso d’Eleganza Villa d’Este.

57532 currently shares the motor house with Type 55 and 43A Bugattis, an Alfa-Romeo 8C Corsa and a Ferrari 250 MM, each car being meticulously maintained to its owner’s demanding standards, ready for concours d’élégance presentation or the high speed blast on a challenging tour.

Currently Dutch registered, this true supercar comes with FIVA passport and a comprehensive history file, including copies of much correspondence between its original owner Chauvenet, dealer Arnaud and the Molsheim factory.