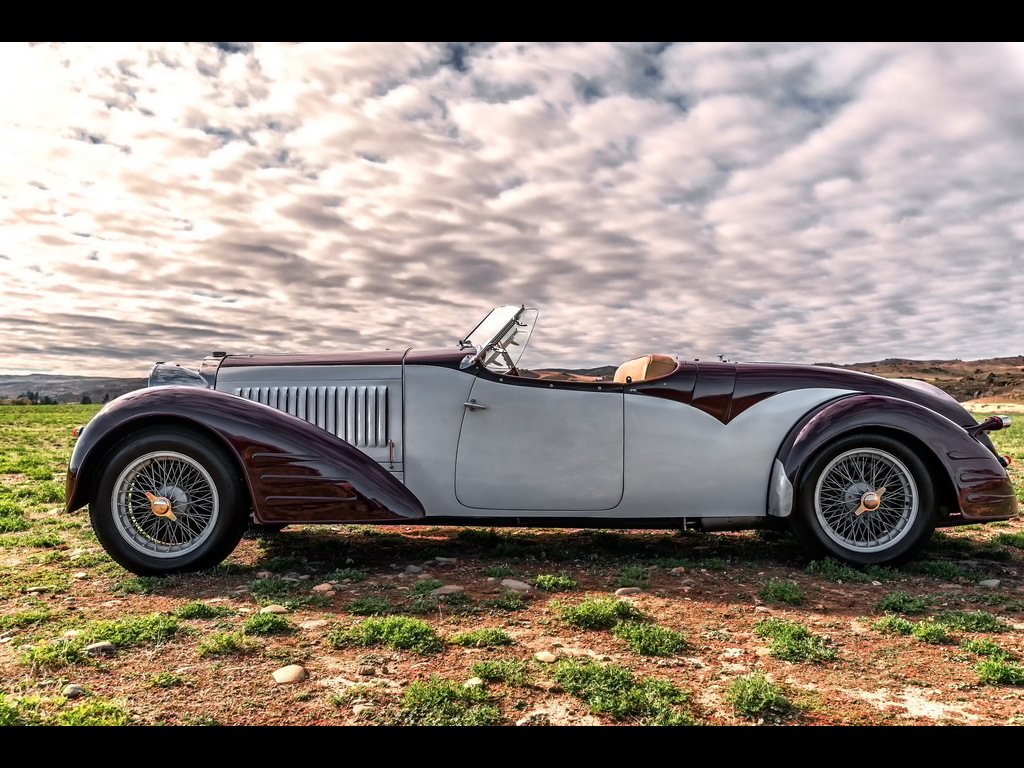 Ettore Arco Isidoro Bugatti was an Italian-born French automobile designer and manufacturer. He is remembered as the founder and proprietor of the automobile manufacturing company Automobiles E. Bugatti.

Gangloff is a Swiss/French coachbuilding company that was founded in 1903 by Georges Gangloff. Gangloff was one of the most important passenger vehicle coachbuilders after World War 1. They produced bodies for Martini, Rolls-Royce, Delage, Ansaldo, Hispano-Suiza, Isotta-Fraschini, Mercedes-Benz, Bugatti, Minerva and various other, also American, makes.

Type 57s were built from 1934 through 1940, with a total of 710 examples produced. Most Type 57s used a twin-cam 3,257 cc engine based on that of the type 49 but heavily modified by Jean Bugatti. Unlike the chain-drive twin-cam engines of the Type 50 and 51, the 57's engine used gears to transmit power from the crankshaft.

A rediscovered Type 57 sold for 3.4 million euros at auction on 7 February 2009 at a motor show in Paris

This very special Type 57 Roadster is the realisation of Gangloff. It was ordered for Agents Frederich, Nice, France.
This 1934 Gangloff Bugatti Roadster Type 57 is a very rare, one off Bugatti once owned by a member of the Louis Vuitton family.
It was subjected to a 50 odd year ground up restoration in consultation with French coach builders Gangloff, by late New Zealander Bob Turnbull.
This car was restored to Concours condition and has 96560 on the clock. It has a fully reconditioned engine and goes beautifully.
The car was restored to its original colours of pearl with burgundy trim and carpet and pale tan upholstery. Restoration was completed in February 2015.

The Bugatti Type 57 is, almost unequivocally one of the most revered models in the entire history of the automobile. The cutting edge engineering for the time in all aspects of its chassis, suspension, engine, and driveline allowed for unparalleled levels of performance and on road refinement – all matched perfectly to the car’s flowing lines.

Those lines were the handwork of Ettore Bugatti’s son Jean, whose skills were more than a match for the best coachbuilders Europe had to offer. However, amongst those coach builders, Gangloff is one whose name and reputation have weathered the test of time.

This example is a truly amazing piece of machinery and history – a Gangloff designed and built Type 57 that is believed to be its one and only Roadster, carrying the chassis number 57217 and Engine Number 122.

ENQUIRING ABOUT THIS CAR

In 2016 this car was offered for sale by Waimak Classic Cars, Australia.

We have 8481 visitors online