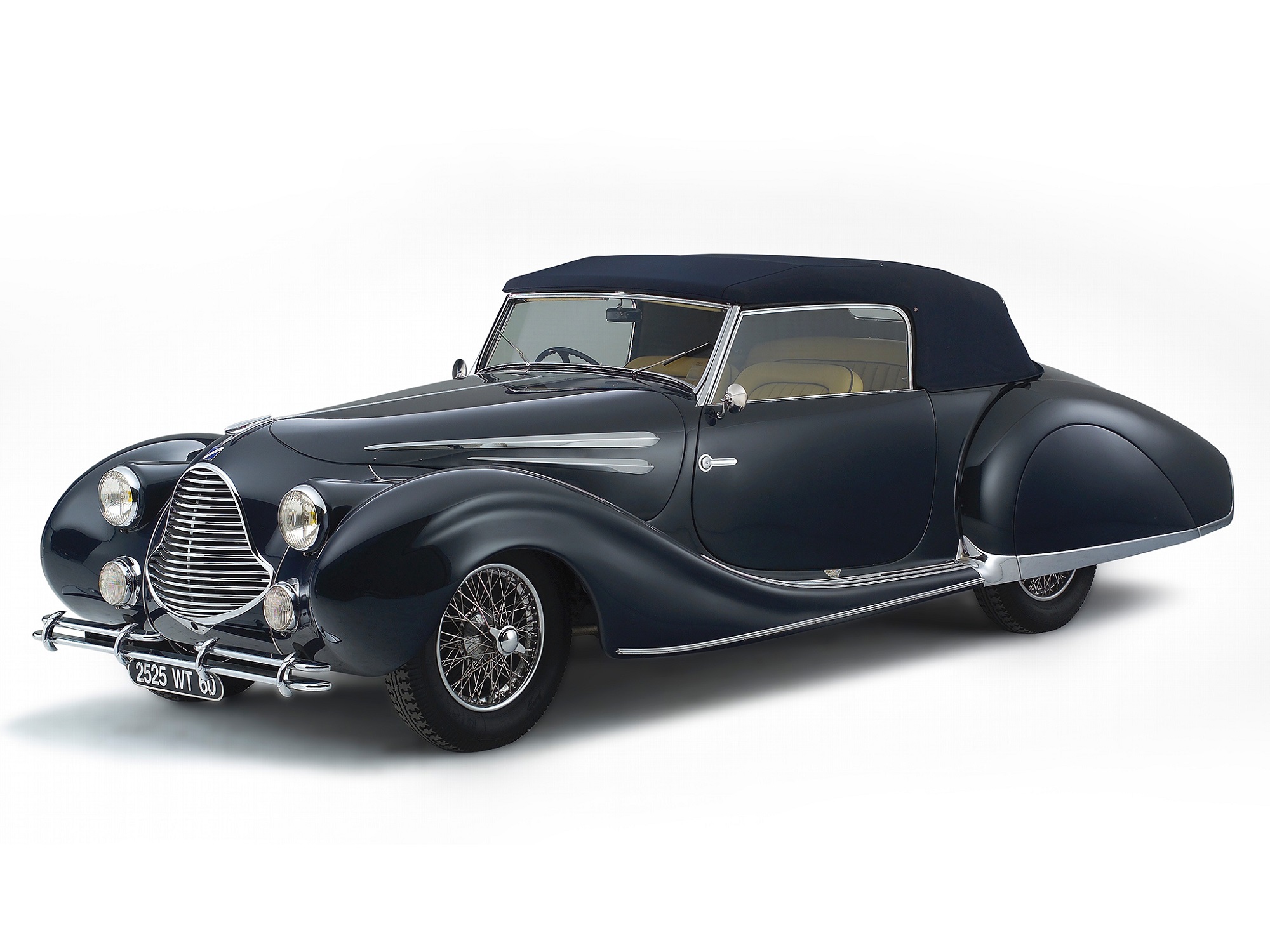 In 1949 the Talbot-Lago T26 Grand Sport had taken over from its sibling the Lago-Record the proud title of the world’s fastest production chassis, its triple carbureted 4482cc power unit developing 190 bhp, giving the car a top speed in the region of 125 mph. One problem with this trackbred engine was the sheer volume of heat it produced, and here – on one of just 36 Grand Sport chassis produced - Figoni and Falaschi have apparently attempted to solve this problem by providing a larger grille area than normal, neatly echoing its shape with the dashboard vent grille.

Amazingly, Figoni and Falaschi have created a long car on a short (104 inches) wheelbase without there being any perception of excessive overhang. The voluptuous curves that were Joseph Figoni’s stock-in-trade are perfectly suited to this competition-bred chassis, and the profile of the body is particularly happy, crystallizing the sheer artistry of the craftsman-coachbuilder. The brightwork accents on the wing skirts recall the swoopy bodies of the 1930s, and indeed the French custom coachbuilders of the immediate postwar period were accused of being ten years out of date. However, this was obviously what the customers wanted, and the fact that no fewer than 16 coachbuilders exhibited at the 1948 Paris Salon reveals that the demand was still there.

The work of these fashionable carrossiers brought color and glamour into the drab postwar European world just as Dior’s ‘New Look’ brought fresh interest to the world of fashion. Indeed, Ovidio Falaschi summed up the role of the custom coachbuilder to perfection when he recalled: ‘We really were true couturiers of automotive coachwork, dressing and undressing a chassis one, two, three times and even more before arriving at the definitive line that we wanted to give to a specific chassis-coachwork ensemble.’

This shapely car epitomizes that role as automotive couturier; its rear end treatment of this car is particularly successful, the long tail recalling the glory days of the 1930s. Indeed, at the 1948 Salon Figoni and Falaschi acted as though times hadn’t changed, exhibiting a gold-painted Delahaye with gold-plated brightwork on the manufacturer’s stand and ‘an elaborate and enormously long roadster’ on their own stand which had a ‘flush-fitting ivory-bound’ copy of the Michelin Guide on its dashboard: the binding alone had cost 40,000 francs… No wonder the better French coachbuilt bodies cost over two million francs.

It hasn’t stopped there with this particular car, which has been subtly equipped for modern touring, with an hydraulic power top and air-conditioning as well as a concealed remote control modern radio; an alternator has been fitted to cope with the extra demands of the electrical system.

Figoni had made a good recovery after the war; when the Germans occupied Paris, they had taken over Figoni's workshops to manufacture aircraft components. In a corner, Figoni & Falaschi kept going by making domestic electric stoves and heating radiators.

Once he had recovered his factory, Joseph Figoni lost no time in creating a new post-war style. The swoopy, spatted wings were there, as were the chrome accents; but Figoni could not resist the temptation to embellish, and added what he called the ‘Narwhal’ line, which featured a protuberance above the radiator grille. His first post-war body, on a French-built Lancia Belna, had foreshadowed the trend for fins on the rear wings, three years before GM launched the trend-setting 1948 Cadillac.

The late 1940s were, paradoxically, relatively successful for Figoni & Falaschi, for the demand for custom coachwork from the United States was such that the company, now under the direction of Joseph Figoni’s son Claude, actually made more money after the war than before - a unique situation for a French coachbuilder.

Perception of the company was no doubt enhanced by the inclusion of Figoni’s Talbot ‘Goutte d’Eau’ coupe in the New York Museum of Modern Art’s famed ‘8 Automobiles’ exhibition, but Figoni & Falaschi had not a sufficiently large export clientele to keep going on overseas sales alone.