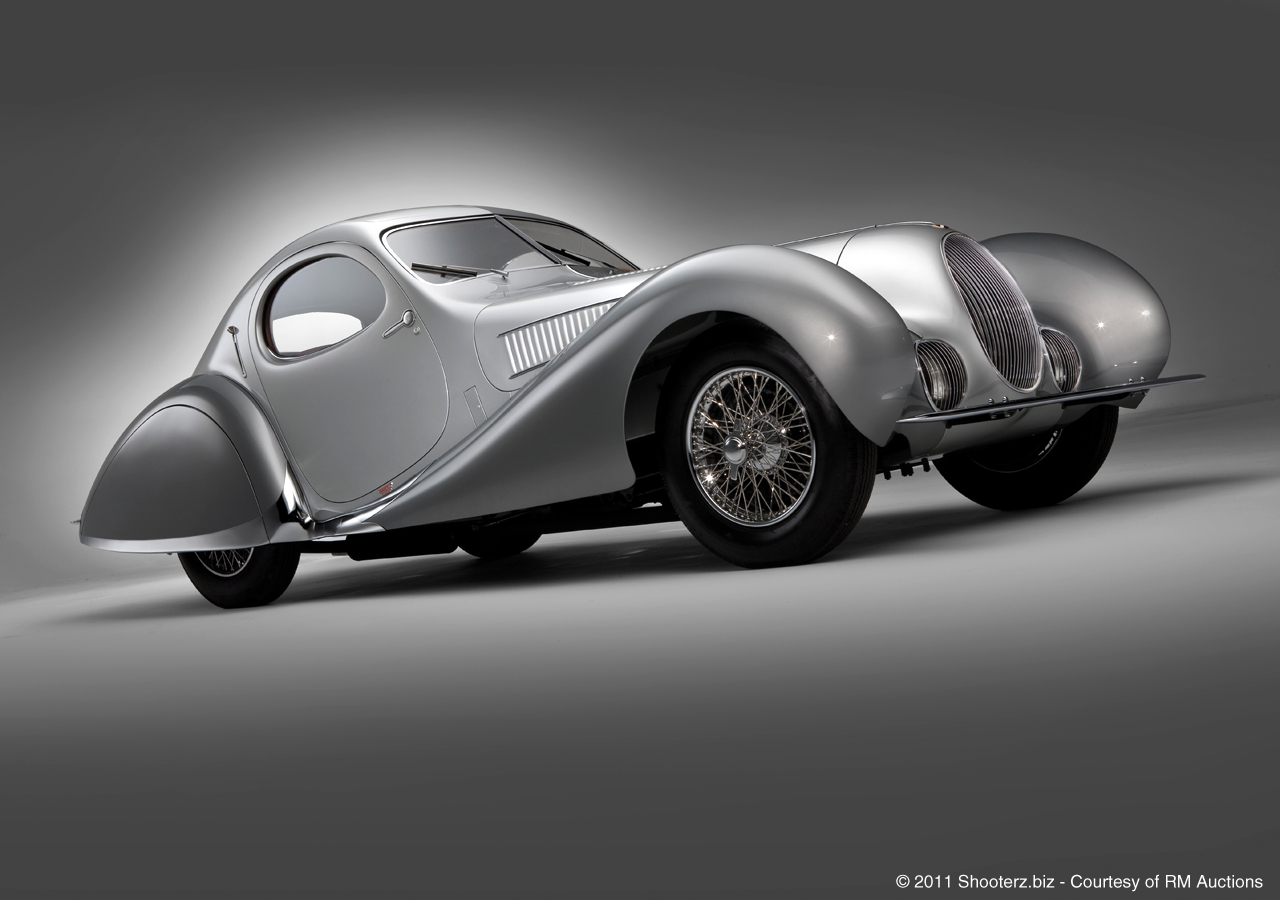 The Teardrop was Figoni et Falaschi's most coveted work. It was, in a sense, a revolt against the more functional cars from the twenties.

Figoni's Teardrop was first seen in 1935, and by the time the car had hit the 1936 Paris and 1937 New York auto shows, the Teardrop had made its seminal mark. It was built in one of two different designs and on varied chassis sizes.

In 1937, Figoni debuted the 'New York Style' which was a smaller, lighter and more powerful car. It is believed that only eleven cars were constructed in this body style, plus five notchback 'Jeancart' Gouttes d'Eau.

By 1937, Figoni et Falaschi had struck an exclusive deal with Talbot-Lago to create teardrop bodies for their finest chassis, the T150C. With its independent front suspension, lightweight construction, excellent braking and low ride height this chassis was focused on competition. It also benefited from Talbot's rich heritage in motor sport and included engineering similar to the Talbot which won the 1937 French Grand Prix.

The definitive version of the T150 was the shortened and lighter SS chassis which only a few Teardrops are built upon.

The car -dissembled– was stolen almost two decades ago from a Milwaukee garage. The deal was that the old man that owned it, a car collector, who had been restoring it since he bought in in 1967 for a mere $10,000, was building it as his own lifetime project.
But then his son died and he was so disheartened by that, it apparently sidetracked the project. The owner was Roy Leiske, and the theft from his shop took place on March 4, 2001.
Turns out the car, and nearly all the parts that go on it, was stolen by means of a crane where the thieves plucked the car up and put it in a truck, and maybe it was an industrial area and nobody noticed.
When Leiske died in 2005, his relatives inherited the car, except nobody knew where it was. The original owner’s survivor then found out the car dealer had it and sued.

By the time he discovered its whereabouts it had been restored in France and sold for $7.5 million in 2015. In the search for the car it was found that the thieves forged papers to ship the car to Europe. It was only when the car dealer that bought it attempted to title the car in Illinois that it popped up as stolen.

Leiske’s cousin, Richard A. Mueller, was the family member who had inherited ownership. When he asked the car dealer, a Mr. Workman, for the $7 million car back, and the businessman refused, Mueller sued. It looked at first like the family was going to lose because ordinarily Wisconsin law sets the clock for suing over unlawful possession at six years but fortunately for the family it turns out that the clock was started ticking by the date the car dealer refused to give back the car. An independent action that can “begin” the clock running at a different time than the initial theft.

The Court of Appeals reinstated Mueller’s lawsuit and ordered the lower court to finalize the case. A copy of the ruling is available in a 250k PDF file at the source link below.

This was simply too rare a car to steal, with the number of these models made very small. It seems to me, in buying a rare car, someone should pay a club historian for that particular marque to “vet” the vehicle’s history right back to the day it rolled out of the factory.

One amazing thing is that the car was once owned by Brooks Stevens a famous Wisconsin-based industrial designer who had apparently abandoned the car. But that explains how it got to Wisconsin.

The car, after it came back from Europe, was also housed at a famous East Coast exotic car restoration shop and that makes me wonder why those famous shops should keep their reputation unsullied when, with a little fact checking, they could find a car that is so rare had been reported stolen. It seems to me that anyone in the chain of ownership who knew it was stolen is taking a risk in selling the car on.

We have 9020 visitors online