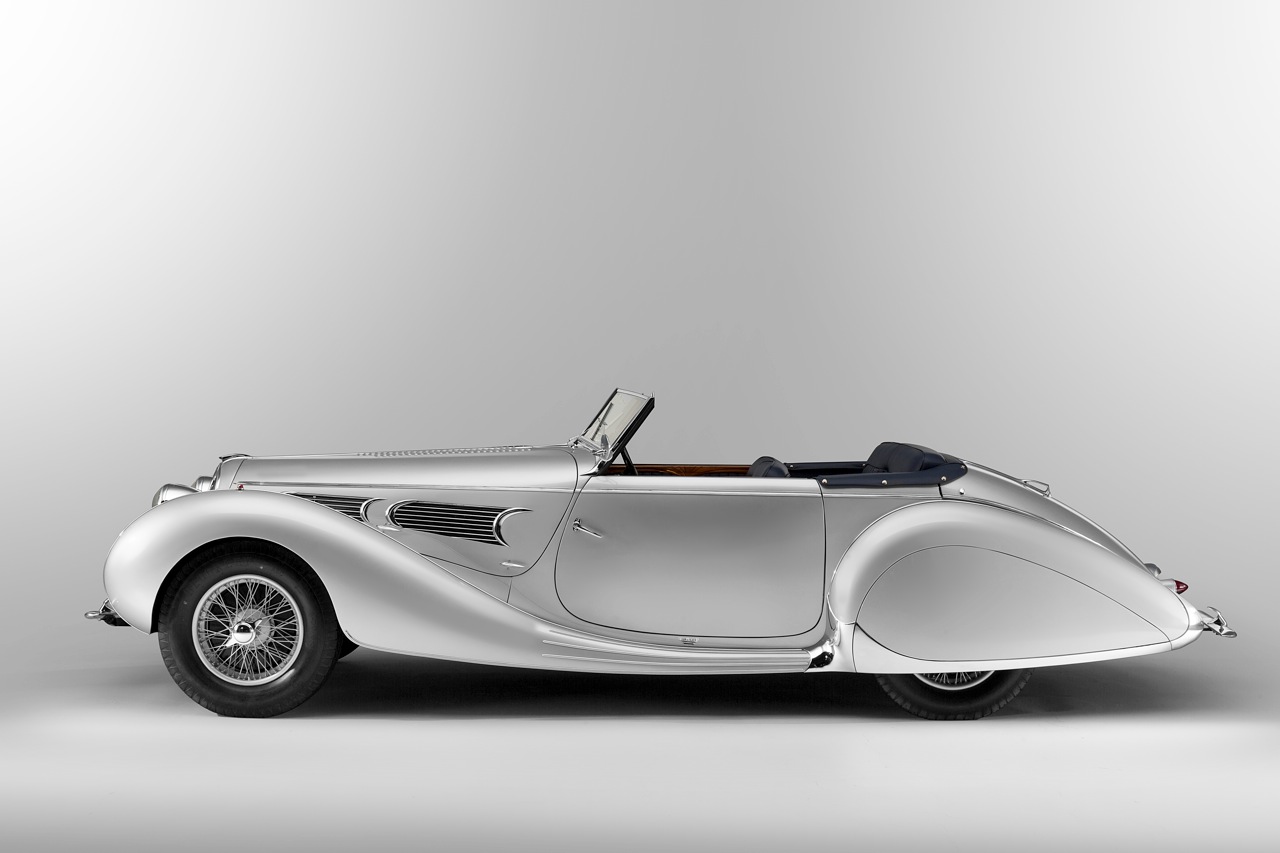 This cabriolet, chassis number 60173, still has its original 135MS engine, no. 60173. These numbers correspond to 1939 in production at Delahaye factories. At the time, the Type 135 MS was the most powerful touring model in the range, fitted with a 20 bhp 3,557-litre engine with three carburettors and an excellent electro-magnetic Cotal gearbox that offered a swift change through the four gears.
Chassis 60173 was a cabriolet bodied by Figoni & Falaschi, the workshop based at Boulogne-Billancourt. The body no. 727 was a special order, and the car was delivered new on 17 March 1939 to Madame Lucienne Benitez-Rexach. It was registered 4294 YC 2 in June 1939 in the Seine et Oise department, in her name and address at that time: 21, rue de Bellevue au Mesnil-le-Roi.
The car's first owner, Lucienne Benitez-Rexach, was born Lucienne Suzanne Dhotelle on 15 January 1908. In the same way Edith Piaf became known as Môme Piaf, Lucienne Benitez-Rexach would become better known by her stage name Môme Moineau. In 1929 she married the engineer and wealthy Puerto Rican businessman Felix Benitez-Rexach. She had made his acquaintance in New York as a star on Broadway, having become a successful singer after being spotted on the streets of Paris by the fashion designer Paul Poiret in 1925. Following her marriage, she became one of the richest women in the world, owning a long list of luxurious properties, cars, yachts and even a Douglas DC3 plane. She led a very worldly life rubbing shoulders with all the celebrities of the day.
Môme Moineau took part in her newly delivered car in the concours d'élégance de L'Auto in the Bois de Boulogne on 9 June 1939, winning 3rd prize in the class for " two-door convertible cars with a removable hood, 11bhp and over ".
On 26 May 1941 the car was registered 4453 RN 1 in Paris, still in her name. Then, on 28 July 1942, it was registered in the name of the couple's friend, Porfirio Rubirosa, the chargé d'affaires for the Dominican Republic who was married to Danièle Darieux. A racing driver and playboy, he had a string of romantic adventures with Marilyn Monroe, Rita Hayworth, Kim Nowak, Eva Peron and others. It was registered CD 143 NH, a special diplomatic registration set up by the Puy-de-Dôme prefecture in Clermont-Ferrand, represented by the letters NH. Between 16 August 1940 and 10 January 1945 the provisional Vichy government registered some 289 vehicles from CD 1 NH to CD 289 NH.
Once the troubles of the war were over, the car was re-registered 7709 YC 8 in Seine et Oise on 16 May 1947, in the name of Lucienne Benitez-Rexach, then living in her sumptuous new property Villa Carmen in Maisons-Laffitte. The following month, the car, still with the same number, was registered to Gilberto Benitez-Rexach, Felix's son from his first marriage. Registered again in Paris under registration 8993 RQ 1 on 19 March 1948, it was owned in all likelihood by another Parisian from 23 December 1948, as this date appears on the subsequent registration 2181 AB 33, on 18 January 1955, for Raoul Robert, an electrician from Bègles in the Gironde Department.
It is important to note that between 23 December 1948 and 17 January 1955, the Parisian owner must have been responsible for various modifications to the bodywork of our Delahaye. Chassis # 60173 was the principal car in the René Clément film Le Château de verre that was released on December 1950, starring Michèle Morgan and Jean Marais. The car appeared with a new front, featuring a more modern, slender-shaped grille, and the running boards had not been removed yet. The new front design corresponded to other Delahaye models bodied by Figoni & Falaschi between 1946-1948. This was simply a case of updating the styling. The car was known in this new modernised form between 1950 and 2012.
Having departed for the Gironde, our Delahaye stayed there until 19 May 1970, changing hands three times. Then, in 1970, we find the car in the department of Tarn, with the number 588 KP 81 and registered in the name of Joseph Brunet de la Biche. On 15 December 1971, the car was bought by Baron François d'Huart, an important Belgian collector. Registered ASH 518 in Belgium, d'Huart kept the car until 11 September 1986, using it regularly to drive to the Côte d'Azur. It was following such a trip, probably taken a little too enthusiastically, that he had to have the engine block rebuilt. After that, the car returned to France to join a large family of collectors who sold it to the current owner in September 2012.
Having been put on the market at the start of 2010 without any serious research undertaken, it was the publication of the reference book Delahaye et Figoni 1934-1954 by Jean-Paul Tissot that inspired the new owner. Detailed information and period photos on the history of # 60173 were reproduced in this book. Consequentially, the vendor, a demanding collector from the north of France, undertook a top level restoration in order to return the car to its original configuration, in respect of Môme Moineau's initial order. The original body, displaying the number Figoni 727 on various wooden elements, was preserved. Only the wings were altered slightly to accommodate the running boards. The joinery was completely restored, and as many of the original elements as possible were retained. The upholstery, dashboard and interior wood trim was redone in line with Figoni's creations of 1939.
This major restoration was carried out scrupulously and methodically by expert hands at the Ateliers de Touraine, led by Patrick Delage. The car was returned to its original colour scheme, as noted in the Figoni & Falaschi register, with light grey paintwork and dark blue hood and upholstery. Delighted with this perfect restoration, the new owner entered his car in the prestigious Pebble Beach Concours on 21 August 2016, featuring a special display of 26 Delahayes. It comes as no surprise that this cabriolet returned home with two awards: 3rd prize in the pre-war Figoni class and winner of the highly regarded French Cup.

We have 7299 visitors online