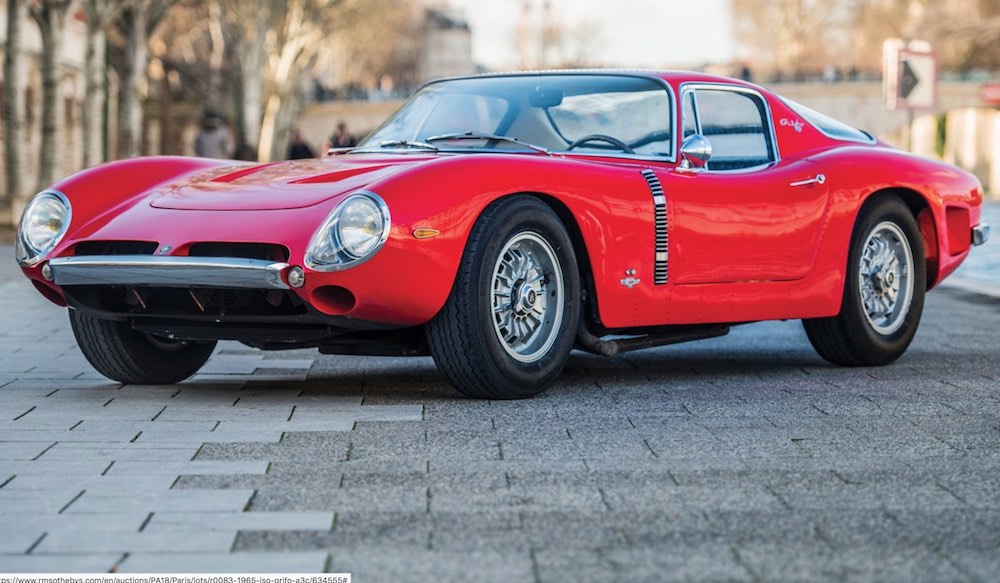 After working with Alfa Romeo and Ferrari on the development of their cars, Giotto Bizzarrini founded his own company, Autostar, in Livorno, Italy, in 1962. A year later he worked with Renzo Rivolta, producing the Iso Rivolta and Iso Grifo A3/C models, before producing cars under his own name beginning in 1964. The first Bizzarrini-built A3/C prototype was shown at the Turin Auto Salon in 1963 wearing a riveted aluminum body by Piero Drogo at Sports Car Modena. The model took part in many races, including the 12 Hours of Sebring, the 24 Hours of Le Mans and the Nurburgring 1000 km.
This A3/C competed at the highest level in Europe, coming in 14th overall and 4th in class at Le Mans, 3rd in class at the Paris 1000 km, and 2nd at the Monza 1000 km. Its current owner has raced the car since 1974 in various historic championships, often finishing in the top three.

Giotto Bizzarrini’s exceptional career started at Alfa Romeo, but Ferrari is where he made his name, developing the 250 SWB, 250 TR and the legendary 250 GTO. Departing Ferrari as part of the infamous ‘Palace Revolt’ in 1961, he was soon involved with upstart ATS and later designed Lamborghini’s V-12.

Bizzarrini worked closely with Renzo Rivolta’s ambitious Iso effort starting in 1962 and later became a constructor of note. At 1963’s Turin Auto Show, Iso debuted the Grifo in two forms: the A3/L as a luxurious GT, and the A3/C as a serious endurance racer. The latter was developed and built by Bizzarrini; as he told author Winston Goodfellow, ‘I started with the idea of Ferrari’s 250 GTO, and wanted to improve on it.’ Iso Grifo A3/Cs won their class at Le Mans in 1964 and 1965, while the road-going A3 Stradale had a quoted top speed of 171 mph in Autosport magazine’s 1964 road test.

This car (#B0209) is one of these rare and very desirable ‘riveted’ A3/Cs, made by Carrozzeria Sports Cars of Piero Drogo in via Emilia Ovest in Modena, in front of the Autodromo di Modena. The bodies were made in ‘avional’ (duralumin), a special alloy of aluminium, copper and magnesium that is very light and elastic but very difficult to weld. Therefore, it needed to be riveted in a similar fashion to an airplane. This style of construction allowed the car to be exceptionally light, tipping the scales at 969 kg. Once the chassis and body were completed, Bizzarrini completed the cars at his small Autostar facility in Livorno.

The eighth of the 10 produced in 1964, Bizzarrini’s period correspondence with coachbuilder Piero Drogo summarized in Goodfellow’s book Bizzarrini: A Technician Devoted to Motor-Racing shows B 0209 under construction in September, with delivery to its first owner in France in November. It was finished in dark red over black leather seats.

It was sold to Paris resident Jean-Philippe Smet, who was better known as Johnny Hallyday. Dubbed ‘the Elvis Presley of France’ by The New York Times, Hallyday had 100-plus million record sales and appeared in more than 30 films, and was nothing short of a hero to many. Hallyday is pictured in and around the car, with Parisian temporary registration 7381 WW 75, in Paris, France, in late 1964/early 1965. On 27 October 1965, the car was registered as 4958 RZ 75, under ‘Mr Smet dit Johnny Hallyday, Jean Philippe, née le 15 juin 1943 à Paris 9è, et résident au 6 Place Winston Churchill, Neuilly sur Seine.’

After Hallyday’s ownership, B 0209 went to Jean Claude Guillaume in February 1966, and then the Grand Garage Moliere in November 1966 before settling into over two decades of ownership by Pierre Sangusko starting on 19 August 1968. According to the car’s current owner, Prince Pierre Sangusko stored the Iso in his castle for 24 years. During this period the car was refinished in white, with a central blue stripe. When he died, Daniel Marin, President of Ferrari France Pozzi, who was a very close friend of Pierre Sangusko, sold the Iso to Michel Hommell on 13 April 1992. He got the car re-sprayed in ‘Ferrari Red’ and displayed the car in his museum, Manoire de l’Automobile in Loéhac, Brittany, France. At that time the car was displayed with the number plate 728 GFS 75, even though it has never been registered with this number.

In 2009, Hommell sold B 0209 to Yvan Mahe, the owner of Equipe Europe. Before the sale, as per French regulation, a Contrôle Technique (equivalent to the UK MoT, and German TÜV) was performed on 21 February 2009, and at that time the car displayed only 25,484 km, believed to be original. It was then registered 214 EYC 77. Still retaining its original interior, it was bought by Pascal Perrier in 2012 before its acquisition by the current owner in 2014. At the 2017 Chantilly Concours, it was exhibited in the Great Musicians’ Cars class, where it garnered the ‘Special Award.’

Today, these early ‘riveted’ Iso Grifo A3/Cs are highly coveted as only a handful did actually survive and seldom come to market. Chassis number B 0209 is especially appealing as it has always been in France, with unbroken provenance back to the first owner, one of France’s most beloved figures.