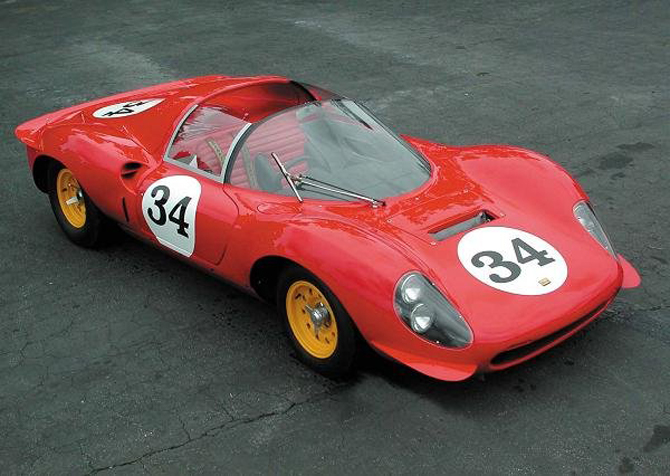 The V6 Dinos were initially introduced in 1957 for the 1.5-liter Formula 2 series. Enzo Ferrari's son Alfredo - known as "Dino" - had designed the engines' layout, and Enzo gave the cars Dino's name after his son's untimely death in 1956. The detailed design was done by the old master, Vittorio Jano. The first Dino sports racing cars were front-engined. Mid-engined cars appeared in 1962.

Ferrari was challenged by Ford in the mid 60s and responded with a series of Sports Prototypes; the 330P-series. Early in February of 1966 Ferrari introduced the 4 liter 330P3 to the press in Maranello. Alongside the 330P3 was its smaller sister, the all new Dino 206SP. It was Ferrari's intention to build 50 of these smaller V6 cars to qualify them for homologation as two-liter Group 4 sports cars. Unfortunately, during the summer of that year, there were a number of labor troubles at both Ferrari and Fiat. Since Fiat with its labor troubles was the builder of the engines for these cars, this effectively ruined any chance of the Dino achieving its production target. In the long run only 17 examples of this car were completed. What started out as a Dino 206 S (Sport) became known as the Dino 206 SP (Sports Prototype) when there were not enough built to qualify for Group 4.

A two-liter motor, which had appeared in the 206P, and designed by Ferrari engineer Franco Rochhi for Formula Two competition, was utilized for the 206SP. However, it had undergone several changes; including a redesigned combustion chamber, lower compression ratio and reversion to single spark plug ignition. Early cars were fitted with three two barrel Weber carburetors. However, on a number of occasions Lucas timed fuel injection was tried with slide valve throttles. Apart from these changes, the specification was mechanically much the same as for the previous cars. Later, several of these vehicles were fitted with improved three valve cylinder heads.

Although the Dino 206 was styled by Pininfarina, the bodywork was built by Piero Drogo's Carrozzeria Sports Cars in Modena and was to some extend a scaled down version of the design used by the 330P3. On a number of cars, a section of the roof over the driver's head was removed to give a targa-type top. A roll bar was molded into the roof section behind the driver.

The chassis of these new Dino racers was a revised semi-moncoque structure formed over a welded tubular frame that was stiffened by stressed alloy panels riveted in place. Some glass fiber panels were also used, particularly in the cockpit area where bag-type fuel tanks were fitted into the sills.

By mid 1967 the Ferrari factory Team turned over their remaining vehicles to private racers.

By mid 1967 the Ferrari factory Team turned over their remaining vehicles to private racers. Dino 206 SP, chassis #026, was sold directly by SEFAC Ferrari to the Swiss Scuderia Filipinetti Race team. The Scuderia Filipinetti first raced the car in the prestigious 12 hours of Sebring on April 1st, 1967. Driving duties were assigned to Herbert Mueller and Gunther Klass who were hopeful that the little Dino would maneuver well amongst the numerous Porsche 904, 906 and 910s from Stuttgart.

German newcomer, Klass was working hard to establish his reputation as an exceptional driver. This was in fact his first season with the Ferrari Factory Team and his expectations remained very high. Swiss born, Mueller on the other hand was well known in all racing circles and simply determined to win at every level. For the race, the SEFAC Ferrari Factory Team loaned Klass to the Scuderia Filipinetti. Wearing the race number 34, the two did well in practice, qualifying 15th overall. The two would have done even better had not minor mechanical problems limited the cars overall top speed down the straights. Race day saw the two quickly move to the front of the pack and by the close of the first hour the two had moved well up on the field, finding themselves in 11th place. By the third hour, Klass and Mueller were fighting it out amongst the two class leading Factory Porsche 910?s of Siffert and Hans Herman. Running third in class and 10th overall, Mueller continued to push even harder, some say perhaps too hard. On lap 63, going into the fourth hours, the right front "A" arm cracked a bushing, which caused the car to vibrate excessively under braking. Despite this Mueller and Klass pushed on. However, they were never again in contention. The two were eventually forced to settle for a rather poor 49th overall out of the 61 entries.

After Sebring, #026 was returned to the Ferrari Factory for service and sorting for the upcoming 1000 kilometer race at the Nurburgring track. The Scuderia Filipinetti again entered chassis #026 in this championship points race, which was held on May 27th, 1967. The SEFAC Ferrari Factory team driver, Jean Guichet was paired with the ever enthusiastic Hubert Mueller as at Sebring, #026 was wearing race number 34. In practice Guichet quickly began putting chassis number 026 through its paces. Tragically, an undetected fuel leak in the injection system began pooling fuel between the cylinder banks. A fire soon erupted while Guichet pulled off to the side of the track. However, he was unable to extinguish the fire. Help arrived in an untimely fashion allowing the fire to severely damage the engine, gearbox and much of the rear bodywork. The damaged racer was then returned to the Ferrari factory to await repairs. However, the damage was to such an extent that it was deemed not worth the expense to repair, as the season was mostly over.

In 1969 chassis #026 remained at the Ferrari factory unrepaired. It was then purchased by the well-known French collector, Pierre Bardinon. While with Bardinon it remained untouched. In 1982 it was purchased by the Italian Ferrari enthusiast, Corrado Cupellini. Cupellini then initiated and had completed a lengthy and complete restoration with direct assistance from the factory.

Corrado Cupellini states: "When I purchased the car, the rear end of the car was badly burned. Rear sheet metal, engine and transmission needed to be replaced. All other major parts, including the chassis, were reusable."

The car was completely reconstructed with the original frame and a 231 B Formula 2 motor in 1985/1987. This initial rebuild made use of this updated Ferrari Formula 2 motor and a Hewland gearbox. In this configuration, Cupellini raced the car on multiple occasions. Snr. Cupellini was also invited to Ferrari's 50th Anniversary Celebration May 31 thru June 8th in Maranello.

Shortly after the 50th Anniversary Bernard Carl of Washington, DC, USA, purchased the car. Mr. Carl was at the Anniversary with Dino 268S Spyder #0798 and had the opportunity to inspect the Dino #026. After Mr, Carl's purchase of the Dino the car was delivered to Terry Hoyle Engineering in Maldon, England for a more comprehensive restoration that saw the correct and original Ex-factory team (SEFAC) Tipo 231B, 206S engine #15 and proper Tipo 537 transaxle refitted back into the car.

We have 7200 visitors online