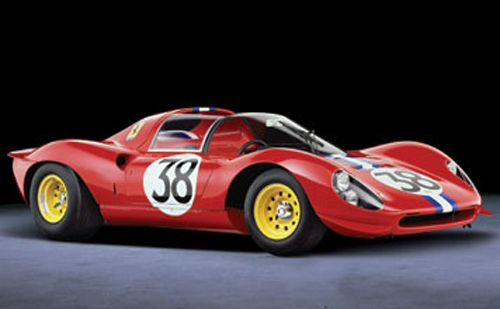 The V6 Dinos were initially introduced in 1957 for the 1.5-liter Formula 2 series. Enzo Ferrari's son Alfredo - known as "Dino" - had designed the engines' layout, and Enzo gave the cars Dino's name after his son's untimely death in 1956. The detailed design was done by the old master, Vittorio Jano. The first Dino sports racing cars were front-engined. Mid-engined cars appeared in 1962.

Ferrari was challenged by Ford in the mid 60s and responded with a series of Sports Prototypes; the 330P-series. Early in February of 1966 Ferrari introduced the 4 liter 330P3 to the press in Maranello. Alongside the 330P3 was its smaller sister, the all new Dino 206SP. It was Ferrari's intention to build 50 of these smaller V6 cars to qualify them for homologation as two-liter Group 4 sports cars. Unfortunately, during the summer of that year, there were a number of labor troubles at both Ferrari and Fiat. Since Fiat with its labor troubles was the builder of the engines for these cars, this effectively ruined any chance of the Dino achieving its production target. In the long run only 17 examples of this car were completed. What started out as a Dino 206 S (Sport) became known as the Dino 206 SP (Sports Prototype) when there were not enough built to qualify for Group 4.

A two-liter motor, which had appeared in the 206P, and designed by Ferrari engineer Franco Rochhi for Formula Two competition, was utilized for the 206SP. However, it had undergone several changes; including a redesigned combustion chamber, lower compression ratio and reversion to single spark plug ignition. Early cars were fitted with three two barrel Weber carburetors. However, on a number of occasions Lucas timed fuel injection was tried with slide valve throttles. Apart from these changes, the specification was mechanically much the same as for the previous cars. Later, several of these vehicles were fitted with improved three valve cylinder heads.

Although the Dino 206 was styled by Pininfarina, the bodywork was built by Piero Drogo's Carrozzeria Sports Cars in Modena and was to some extend a scaled down version of the design used by the 330P3. On a number of cars, a section of the roof over the driver's head was removed to give a targa-type top. A roll bar was molded into the roof section behind the driver.

The chassis of these new Dino racers was a revised semi-moncoque structure formed over a welded tubular frame that was stiffened by stressed alloy panels riveted in place. Some glass fiber panels were also used, particularly in the cockpit area where bag-type fuel tanks were fitted into the sills.

By mid 1967 the Ferrari factory Team turned over their remaining vehicles to private racers.

Chassis 008, is the fourth of the series production 206 SPs and the third of the standard alloy spider-bodied 206 SPs. It was delivered to the SEFAC Ferrari team and used for testing and evaluation. Some sources indicate it was entered by the factory to be run by Luigi Chinetti's North American Racing Team in the 1000 km race at Monza April 25, 1966 where it was driven by NART driver Bob Bondurant and SEFAC driver Nino Vaccarella, but was damaged in practice and withdrawn before starting the race.

Six weeks later, on June 5, #008 was again entered for NART in the ADAC 1000 km of the Nuernburgring. Driven by Pedro Rogriguez and Richie Ginther, the 206 SP started ninth on the grid and drove to a third overall and second in class behind another 206 SP, #004 driven by Scarfiotti and Bandini, and the winning Chaparral 2D of Phil Hill and Jo Bonnier. Remarkably, all three podium finishers were on the same lap of the 22.81 km Nordschleife.

On June 18, 1966, #008, using a SEFAC Ferrari entry, was on hand at the 24 Hours of Le Mans. The car was, however, now owned by Chinetti, having been sold by SEFAC Ferrari on June 10. Chinetti put Charlie Kolb and George Follmer in the 206 SP, and they started in 32nd position. After an excellent start, oil seeped onto the clutch rendering it useless, and on just the 9th lap the team withdrew, a fate eventually shared by 40 of the 55 entrants.

After returning to Maranello for servicing and race preparation it was shipped to the U.S. and to its next owner, M. Schroeder, who immediately entered it in the August 28 USRRC-Buckeye Cup race in Lexington, Ohio, where it was again driven by Charlie Kolb. Kolb brought the 206 SP home second in class and sixth overall.

Entries at The Road America 500 at Elkhart Lake and the USRRC race at Bridgehampton followed before #008 was purchased by Fred Baker, who arranged to use a Chinetti entry in the 1967 Daytona 24 Hours. A fresh engine rebuild and gearbox overhaul were not completed in time to qualify, and #008 started from the back of the grid as a result. The driving team was strong: Jo Schlesser, Masten Gregory and Peter Gregg. At just over half distance, after moving within sight of a top 10 placing, Gregory made a routine pit stop only to have the engine misfire when it restarted, which turned out to be a stripped distributor drive.

Baker again used a Chinetti entry for his Dino 206 SP at the Sebring 12 Hours on April 1. Charlie Kolb and Ed Crawford started from 20th on the grid, where they remained when the green flag fell, sidelined by a broken halfshaft. For the remainder of 1967 the 206 SP contested SCCA and USRRC races driven by Lee Cutler and occasionally Charlie Kolb.

It was back at Daytona for the 24 hours in 1968 after being rebuilt by Chinetti's NART mechanics. Now consigned or loaned to Chinetti, he put Kolb and Pedro Rodriguez in #008 and Rodriguez qualified 10th among the three liter Alfa Romeo Tipo 33/2s. Kolb and Rodriguez kept the little Dino among the top 10 until another misfire brought them into the pits and early retirement. Baker decided to sell the car, although Lee Cutler apparently worked out a deal to drive it in later races. Before the end of the year he bought the Dino from Baker, marking the end of its front line racing career.

Harley Cluxton bought it from Cutler in 1971, selling it later that year to noted Ferrari collector and enthusiast, Walter Medlin in Kissimmee, Florida. Medlin did nothing with the beautiful little 206 SP except store it among his other cars where it stayed for more than 20 years. In 1995 it was acquired by Symbolic Motor Car Company and given a complete two-year restoration by Rob Shanahan. After completion, it became part of several important Ferrari collections and was proudly displayed at such diverse and important events as Rosso Ferrari at Rodeo Drive and the Goodwood Festival of Speed (both in 1997), and Cavallino Classic in 2004.

We have 7428 visitors online