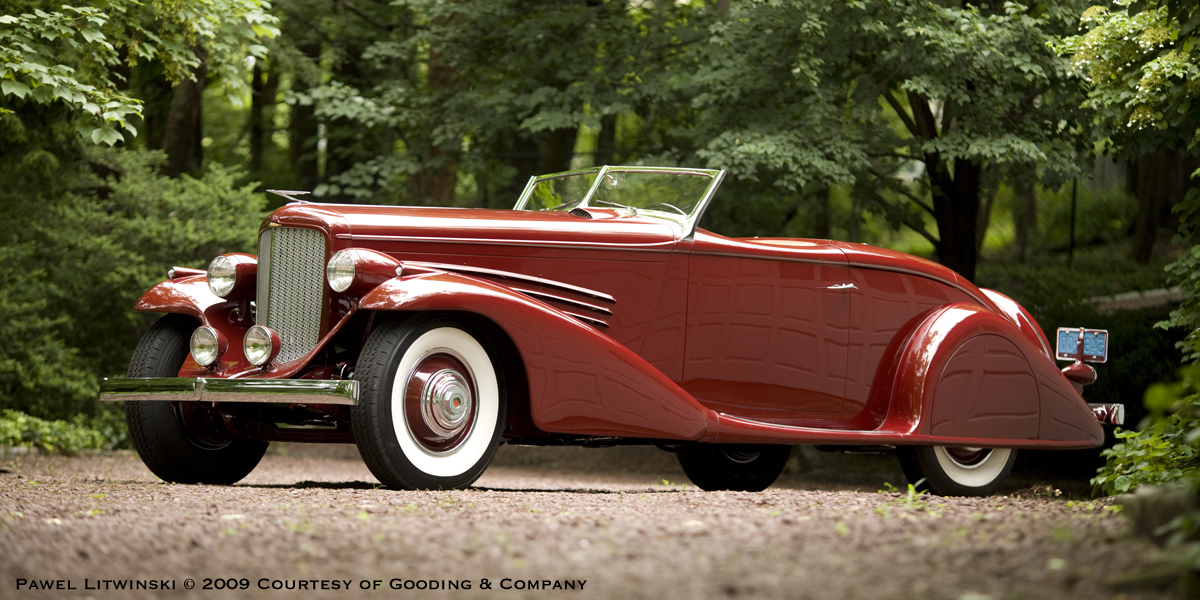 This wonderful one-off Duesenberg SJ was built for Barbara Hutton, the heiress to the Woolworth fortune. Hutton was well known for her extravagant generosity, and the car presented here is a fitting example of her remarkable largesse. It was a gift for Serge M'Divani, the brother of her lover Alexis M'Divani.

The famed M'Divanis were the children of Soviet Georgian nobles who fled Russia during Wold War One. Despite their semi-royal status, the men of the family earned a reputation as socialites, lotharios and womanizers. Prince Serge M'Divani had settled in the US and his brothers were connected to some of the wealthiest women in America and were known to marry each other's former lovers and even former wives. Such was the situation that led to the construction of this magnificent Duesenberg. In 1933, Barbara Hutton had fallen for Alexis M'Divani, the brother of Serge M'Divani. Believing his affair with Hutton would turn out to be even more promising, Alexis had recently divorced Louise Astor Van Alen. Throughout their marriage, both brothers took great advantage of Hutton's incredible wealth and status, and were in receipt of money, gifts and property.

Every coachbuilder has a design that clearly stands above the others for its use of proportion, daring construction methods and harmony of theme and detail. Among Duesenberg enthusiasts, coachbuilding connoisseurs and designers, this one-off SJ Roadster is hailed as the most successful Bohman & Schwartz design for the Duesenberg chassis and an absolute triumph in the art of coachbuilding. The original design was the work of W. Everett Miller, a highly regarded freelance designer and one of the true artists of the Classic Era. Along with De Sakhnoffsky, Al Leamy, Harley Earl and Raymond Dietrich, W. Everett Miller is regarded as one of the most important and influential designers of the 1930s, an era that is seen as the zenith of the coachbuilt automobile. By the 1930s, Miller had worked as a head designer for two of the finest American firms, Murphy and Locke & Co, and was enlisted by Packard to create a number of stunning designs. This car was a fascinating segue in Miller's style that reflected both his restrained use of line and detailing as well as his newfound use of Art Deco themes.

This roadster features a number of remarkable treatments that are unique to this particular car. Alas, Bohman & Schwartz never used these cues again as, by 1936, the supply of Duesenberg chassis was limited. The tight, restrained proportions and clean fresh lines of this model are rarely seen on other Bohman & Schwartz Duesenbergs that, more often than not, incorporated the cues of the very coachwork they modified. The difference with this Model SJ is that it was one of only a handful of clean-sheet designs executed by Bohman & Schwartz on a bare chassis, rather than an updated version of a pre-existing body. It should also be noted that much of the body was constructed in alloy - a rare instance, as the vast majority of Duesenberg bodies only use steel.

Prince Serge M'Divani took delivery of this supercharged Duesenberg Roadster in 1935. Its rakish good looks, grandeur and unbridled power were more than the prince could resist. There is no doubt that the prince himself had an irresistible charm and charisma that drew women to him, even the wives of his siblings, and shortly after receiving the SJ, he married his brother's ex-wife, Louise Astor Van Alen. Presumably, the car was briefly used in Los Angeles, just after leaving the Bohman & Schwartz coachworks, and when he moved eastward in February 1936, the SJ went with him.

Less than a month after their marriage, Serge M'Divani entered an international polo tournament in Palm Beach, Florida. During an early match, his horse collided with another. M'Divani was thrown from his horse and was kicked in the head, killing him instantly. After Prince M'Divani's untimely death, Turner & Blood, the famed New York Chrysler dealer, took possession of the famous Duesenberg and offered it for sale. According to the ACD Club, Melvin Clemens of Bridgeport, West Virginia, purchased the Duesenberg sight unseen. After some use, Mr. Clemens took the car to J. Roger Davis, a well-known Duesenberg mechanic who undertook a thorough mechanical rebuild of the supercharged engine. It is now believed that under Clemens' ownership, the car's original engine, J-572, was placed in chassis 2268. The Prince M'Divani SJ was then given a replacement engine in the form of a Duesenberg factory-display SJ engine, J-509, which had yet to be used in any other car. For over a decade, the car remained in Clemens' hands until it was sold to Mr. Jerry Gebby.

Jerry Gebby, a gun engineer from Dayton, Ohio, discovered this Duesenberg at the end of WWII. His adroit engineer's mindset and his admiration for the grand Duesenberg marque made this car his favorite, and he treasured the SJ for over 30 years. In 1935, he would have never been in a position to own such a fine automobile; however, by the 1950s, a Duesenberg was relatively affordable. Although a Duesenberg no longer carried the prestige and instant recognition that it had before the wars, Mr. Gebby cherished the car and was said to have kept his beloved possession chained to a tree next to his humble abode - little more than a static mobile home.

Soon after acquiring his Duesenberg, Mr. Gebby painted it black and affixed a special script that he designed to the front of the radiator. Not content with simply making cosmetic improvements, the engineer designed and created a unique four-carburetor manifold utilizing Stromberg 97s to coax as much power from the supercharged straight eight as possible. He also affixed a number of interesting "driver's features", including a prism that would allow him to more easily see when a stoplight changed from red to green, a useful feature for street racing.

The car remained in Mr. Gebby's care until Steve Nanini, a well-known collector of great American classics, purchased the mighty SJ in the 1980s, toward the end of Mr. Gebby's life. Mr. Nanini had the car comprehensively restored by Duesenberg authority Randy Ema, who dressed the coachwork in its current burgundy over tan color combination. Soon after the car was sold to famed collector John Mozart, who, many years later, sold it to Patrick Ryan, another highly regarded collector. In its current ownership, the SJ Roadster was invited to participate at the 2009 Amelia Island Concours d'Elegance, where Bohman & Schwartz was featured. Fittingly, it easily won First in Class.