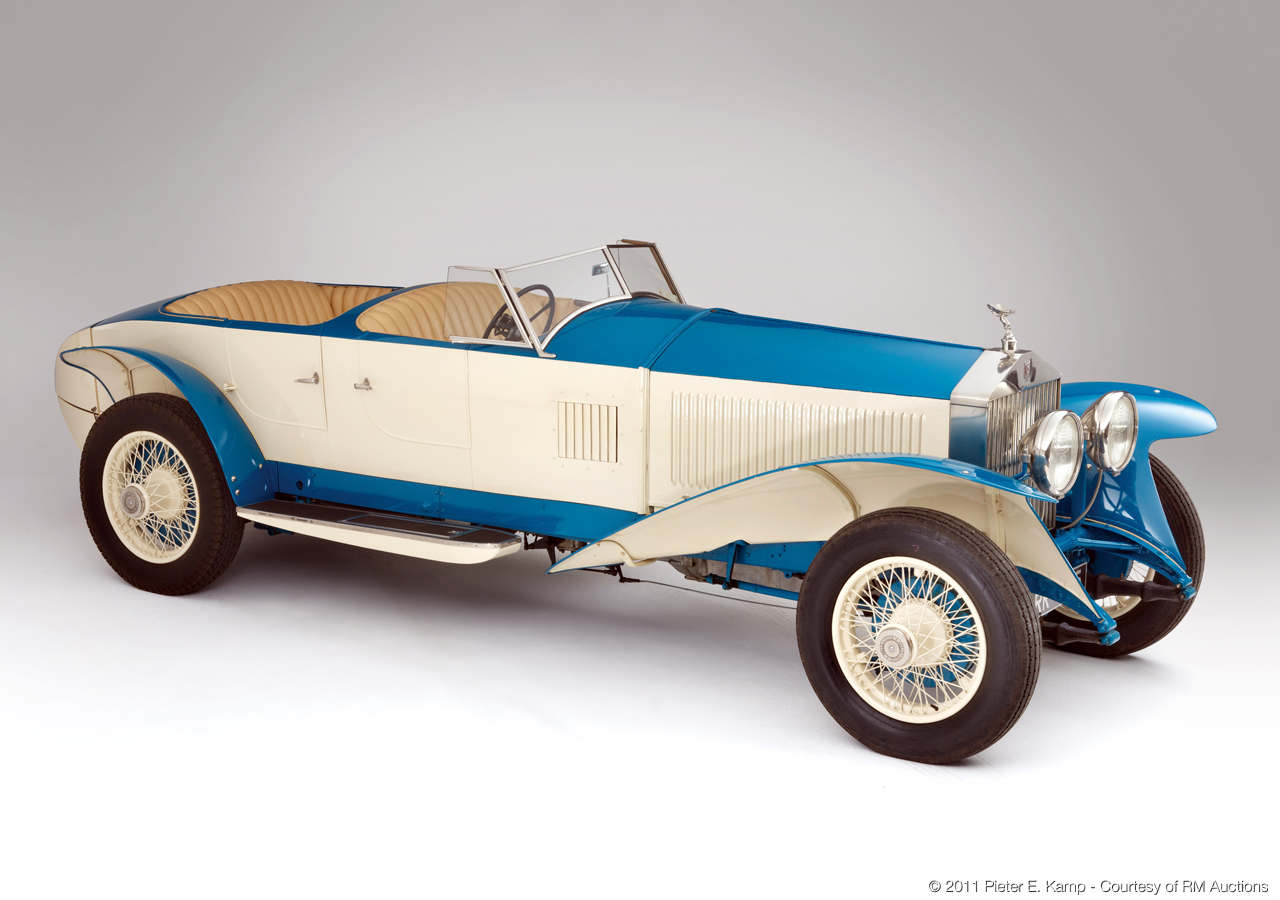 One of the most significant Rolls-Royce experimental cars is surely 10EX, built in late 1925 to demonstrate the performance potential of the "New Phantom" introduced earlier that year. Although the chassis was an evolution of the Ghost, the engine was new, with overhead valves and larger displacement of 7,668 cc. However, the New Phantom, later to be designated "Phantom I", was heavier than the Silver Ghost and performance suffered, especially when graced with the ever-larger bodies preferred by certain clients.

There was disappointment that the enhanced power had not produced a proportional improvement in the car's performance, so Royce instructed his young designer Ivan F. Evernden to tackle this task. Evernden realised that the classic coachbuilder of the day was still using traditional methods of body construction evolved in the days of the horsedrawn carriage and he designed a whole new special Open Sports Tourer body which was put on Phantom I, chassis 10EX, by Barker & Co., with the intention to have a car to appeal to the small but influential fraternity of owners who would accept the discomforts of an open touring body in exchange for an increase in performance and particularly in maximum speed.

Even this special car, however, proved too heavy. W.A. Robotham, assistant to Experimental Department head Ernest Hives, ran some tests at Brooklands and found that by successively removing certain items he could improve the top speed. Taking off the front wings gave an additional 6.4 miles per hour, the greatest single gain, but many smaller items contributed. With the side-mount spare, windscreen and bonnet ventilation removed, in addition to the wings, a full 11.4 mph was gained.

In December 1926, 10EX went back to Barkers for some renovations. The spare wheel was moved to the rear and enclosed in a clamshell-like compartment. A new detachable hood and cover were constructed, along with a tonneau cover. New wings were fitted, as well as four separate step irons in place of the running boards. A new vee-type windscreen was installed, and the seats were lowered using pneumatic upholstery. The headlamps were replaced with Zeiss units. Upon completion of the modifications the car was sent to Derby, where the cylinder head was replaced with an aluminium one. Hartford shock absorbers were added to supplement the standard hydraulic type. Hives was quite pleased with the performance and road-holding. Henry Royce tried the car, too, but found more things to improve. "Nothing was ever good enough for Royce", wrote Evernden. Additional changes were made to the steering and suspension, which were eventually adopted for all Phantoms.

More tests were carried out at Brooklands in September 1927, comparing with a standard tourer, chassis 46PK. With the exhaust cut-out open, the "CJ sports car", as 10EX had become known (Rolls-Royce managing director Claude Johnson had been a staunch supporter), achieved a half-mile average top speed of 91.2 mph, compared to 78.26 for 46PK. Further tests were carried out regarding removal of other items - surprisingly removal of the wings yielded only three additional mph.

Development work on 10EX ended in late 1927, but three more experimentals were built with lighter bodies: 15EX (by Hooper), 16EX (by Barker) and 17EX (by Jarvis & Sons). The first of these, 15EX, was completed early in 1928 and road tested on the Continent, where it was written off after a serious crash. The second and third cars were sold after testing was complete, 16EX in London and 17EX to India. By this time, the Phantom II was imminent, and development on Phantom I chassis came to an end.

10EX was used by the company in liaison with the Air Ministry, with the Derby registration CH 5877. After its test career, it was frequently used as a works demonstrator car, and in fact, it was even used by the factory to visit the 1927 Schneider Trophy seaplane competition in Venice, which Rolls-Royce won in 1929 and 1931. Perhaps most interestingly, it is generally believed that Lawrence of Arabia was loaned 10EX for continental touring. A photo of him with the car reportedly exists.

During the works ownership the car was painted pale grey. When sold in 1931 through Howards Garage in West Byfleet, Surrey, to a local man, Mr. T.A. Batchelor, it was a two tone blue/black, with black leather. In June 1937, it passed to J.H. Rosslyn Smith of Hythe, Kent. Around 1948, it was purchased by Mr. Lawrence Mitchell of Edgbaston, Birmingham, who sold it, unrestored, to A. Meredith-Owen, Esq. of Banbury, Oxfordshire, circa 1952. Meredith-Owen restored it over a period of years, returning it to the original grey colour scheme in which it appeared while used by the company. In 1980, following his passing, the car was acquired by his son William Meredith-Owen, who commenced a new restoration in the 1990s. He consulted Evernden, who said he always felt the car should have been blue and cream, and offered a coloured sketch which Meredith Owen followed exactly. During this period it was re-registered with the cherished number RR 4015. With regard to the engine, 10EX was of course an experimental car intended for testing and was therefore tested with several engines and back axle ratios while at the factory, of which the numbers are not known. In 1931, the car was sold with engine number AR 75, which was not the one the car was built with new. AR 75 was ultimately changed for the present unit in 1961.

We have 8816 visitors online