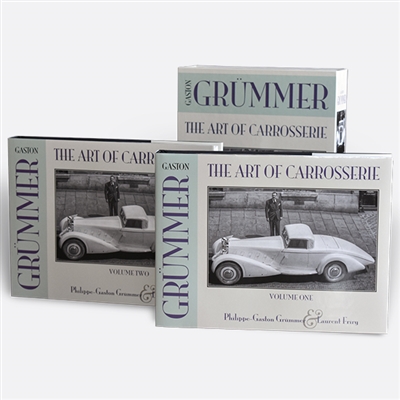 The years between the two World Wars was an extraordinary period for the French luxury car trade and during this time, Carrosserie Gaston Grümmer was one of the leading coach building houses in Paris.

Descended from a long line of coach builders, Gaston Grümmer was the son of Antoine-Joseph whose company, J. Grümmer formerly V. Morel, produced first, from 1845, exceptional horse-drawn carriages and from the 1890s automotive bodies. Trained in the family business before World War I, Gaston Grümmer, spent the war as a soldier, first on horseback and in the trenches and then in the air as a pilot. At the end of hostilities, he brilliantly re-launched the family business transforming it into the Société Anonyme des Etablissements Grümmer. As the company moved towards the production of series bodywork for various manufacturers, Gaston decided that he wanted to break away to build custom cars and in 1924 he created his own company under the name of Carrosserie Gaston Grümmer. For the next ten years he achieved great success on both aesthetic and technical levels.

Thanks to recently discovered and previously unpublished archives, his son, Philippe Grümmer, in association with one of the best French automotive historians, Laurent Friry, takes us back to this glorious period during the "Roaring Twenties" recalling the major events of the Concours d'Elégance and Les Salons de l'Auto, and describes the bodies that Gaston Grümmer produced for the chassis of around 54 manufacturers and the hundred or so prizes which he won.

Illustrated with photographs, press articles and period documents, including the reproduction of a series of design drawings, this reference book on bodywork of the time is a must for any student of the period.

Philippe Grümmer, Gaston Grümmer’s youngest son, was born in Angers, France in 1942. After retiring from his work as a developer of shopping centres, he occupies himself with writing and photography and as a freelance journalist with special interests in horses, hunting, carriages, cars, art and travel.
A few years ago, Philippe Grümmer discovered a trunk of magazines, pictures and records relating to his father’s work as a coachbuilder, and he recognised their significance in the history of the automobile. After writing several articles on the subject and seeing the possibility of a major book he approached the automobile historian Laurent Friry to write it with him.

A few years ago, he discovered a trunk of magazines, pictures and records relating to his father’s work as a coachbuilder, and he recognised their significance in the history of the automobile. After writing several articles on the subject and seeing the possibility of a major book he approached the automobile historian Laurent Friry to write it with him. Philippe is a member of the Automobile Club de France where he is president of the Groupe de Cavaliers (Riders’ Club) and a member of the Historical Commission.

Laurent Friry was born and grew up in Mulhouse, France. After studying in Strasbourg, he moved to Paris where he now lives and works as a telecommunications engineer specializing in international projects. His interest in old cars began after a visit to the Schlumpf brothers’ collection in 1977. Excited by the many different styles and techniques of the cars, he began to read books and magazines, researching the history of the automobile, particularly from its origin to the early 1950s with a special focus on the manufacturers of luxury cars. Another great interest is French coachbuilders and coachwork. Laurent was the co-author of Le Gotha de L’Automobile Française, a history of the French luxury cars, which received the Nicolas-Joseph Cugnot Award in 2011 and Farman, de l’Aviation à l’Automobile, the story of the Farman brothers who made a fortune building airplanes during World War I before producing one of the most exclusive French cars. This last book also received the Nicolas-Joseph Cugnot Award in 2014. Laurent is an active member of the Society of Automotive Historians.

We have 6793 visitors online