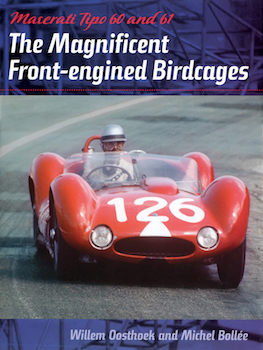 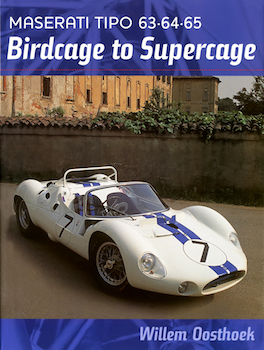 Almost 30 years have passed since the publication of the first book about the famous Tipo 60 and 61 Birdcage Maserati race cars. A new, more comprehensive description of their competition history has been long overdue and Dalton Watson Fine Books are delighted to announce the publication of Maserati Tipo 60 and 61: The Magnificent Front-engined Birdcages. Much additional information has come to light in the last two decades which has enabled the authors, Willem Oosthoek and Michel Bollée, to include numerous updates, corrections, and further elaboration regarding the history of this innovative design.

In 1959, while Ferrari and Aston Martin battled for supremacy in the World Sports Car Championship, Maserati returned to the racing scene with an amazing sports racer, revolutionary in concept: the 2-liter Tipo 60. The car received the nickname ‘Birdcage’ because of the design of its chassis and was immediately successful.

The 3-liter version, the Tipo 61, appeared soon after in response to demand from the many private owners and drivers determined to make the Ferraris eat dust. Twenty-two front-engined Birdcage Maseratis campaigned in a vast number of races during the nine-year period between 1959 and 1967. Light and fast, by 1967 they had accumulated almost 170 victories. The new book is a complete history of the car during those years and, for the first time, includes the many Birdcage appearances in European events.

Part 1 of the book covers each individual year, divided in segments on World Championship, North American and European events. Part 2 portrays the individual race history of each chassis number, as well as the owner sequence over the years. At the end of the book each driver is linked to the specific chassis number[s] of the Birdcages in which he competed.

The authors have had the benefit of input by many personalities involved in the early history of the Birdcage Maseratis, both drivers and car owners. The book contains first-hand anecdotes, the result of interviews with Bill Krause [the 1960 Times Grand Prix victor, who also wrote the Introduction], Chuck Daigh, Jim Jeffords and many more. In addition, making the book come alive visually are the great images taken by professional photographers such as Flip Schulke and Bob Tronolone, and photographs from the personal collections of the owners and drivers, many of them previously unpublished. The book is supplied with a slipcase. 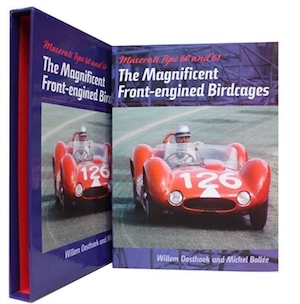 In addition, a limited number of double slipcases are available upon request that will also hold Willem Oosthoek’s book about the rear-engined Birdcages, Maserati Tipo 63, 64, 65, Birdcage to Supercage. The books have been designed to match and can also be purchased as a pair in the double slipcase for $225.

Residing in Weddington, North Carolina, Willem Oosthoek is a retired international banker and a lifelong Maserati aficionado. As historian of The Maserati Club in the US he has written numerous articles for its magazine Il Tridente. His articles have also been published in Vintage Motorsport, VintageRacecar Journal, Motor Sport, Prancing Horse, Der Dreizack and Sports Car International. Oosthoek’s 2004 book Birdcage to Supercage is the defining history of the rear-engined Birdcage Maseratis. He is a recognized authority on the subject of competition Maseratis, often consulted by private owners, museums and auction houses.  More about Willem Oosthoek.

We have 9213 visitors online